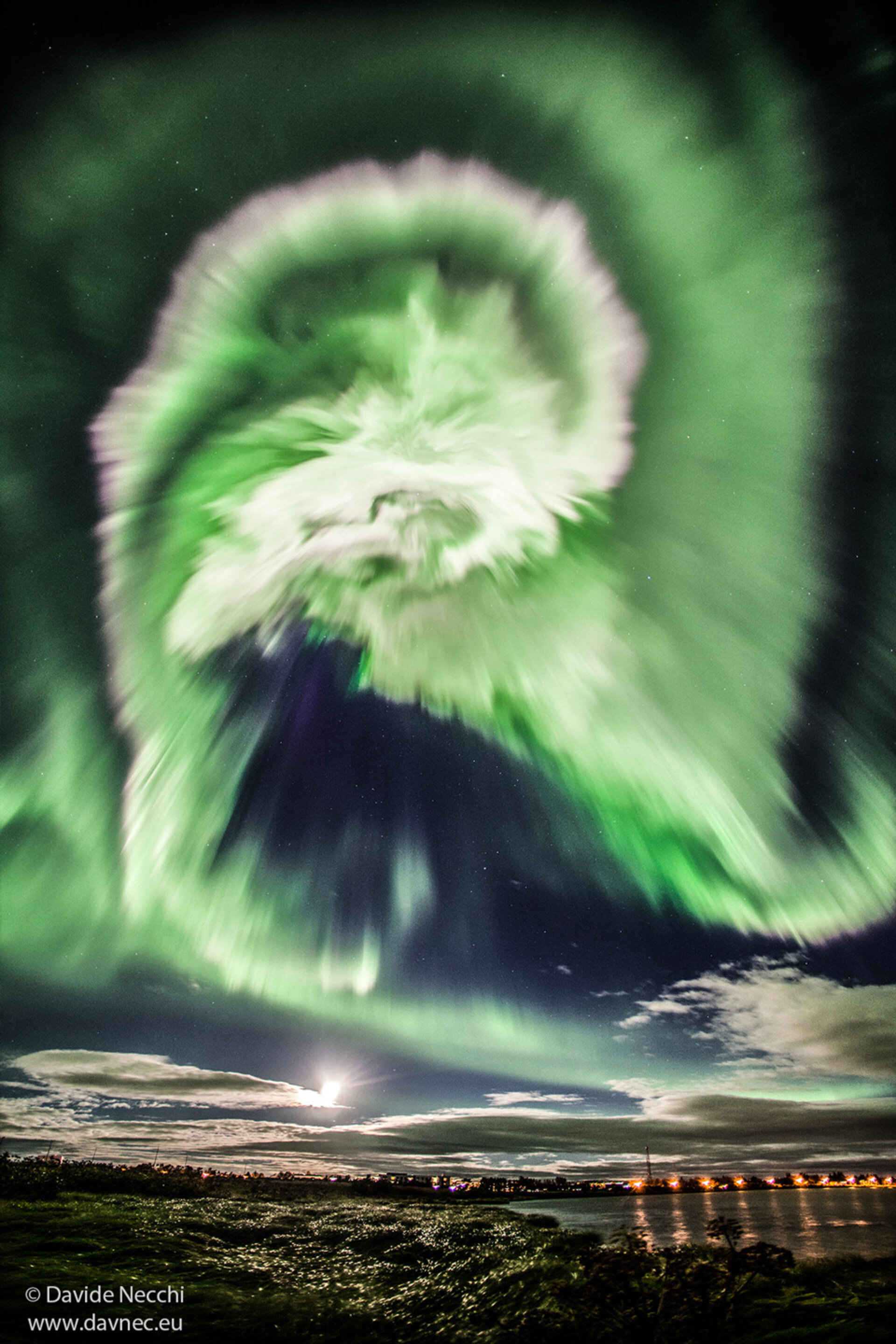 A sinister-looking aurora over Iceland

This whirling, twisting skyscape is an arresting and somewhat intimidating sight – a perfect Halloween Space Science Image of the Week. Jagged lanes in shades of dark and pale green tangle with bright patches of white, creating a knotted spiral somewhat reminiscent of a celestial serpent writhing across the sky, looming ominously over the sleepy town below.

It may look appropriately spooky and otherworldly, but this image shows something that is quite commonplace at Earth’s northern- and southernmost latitudes. The flashes of green in the sky are an aurora, seen when large bursts of energetic atomic particles stream out from the Sun and hit a planet’s atmosphere. These particles filter down through the protective layers surrounding Earth – such as the magnetosphere, the region of space dominated by the magnetic field – and interact with the air particles found below in the atmosphere. Patches of atmosphere subsequently glow brightly and eerily, filling our skies with startling ripples and flashes of colour.

Auroras are often referred to as ‘the northern lights’ (aurora borealis), but they also occur regularly at southern latitudes (aurora australis). They are best seen from regions including Australia, New Zealand, Antarctica and parts of South America (southern), and Canada, Alaska, Scandinavia and Iceland (northern).

The effect is seen only at polar and near-polar latitudes because the charged particles travel in towards Earth along magnetic field lines that meet our planet at its poles.

Auroras are the most visible manifestation of the Sun’s effect on Earth. Since 2000, ESA’s quartet of Cluster satellites has been investigating the complex Sun–Earth connection and has been unravelling the puzzle of how and why auroras form.

This image shows a town in southern Iceland named Selfoss, on the Ölfusá River (visible in the foreground). It was taken by photographer Davide Necchi on 27 August 2015. This particular aurora was linked to a solar storm, which caused an especially large and sudden outpouring of particles into our atmosphere. As a result, the lights were intense and unusually bright, appearing abruptly in the evening sky before it was fully dark. In fact, the aurora was so bright that Davide opted for a relatively short 3 second exposure time, conscious that any longer may cause the brightest parts of the photograph to ‘burn’ or become ‘blown-out’, thus losing detail.

Necchi used a Canon 5D Mark II camera with a 14 mm f2.8 lens. This image had an ISO of 1600, and no filter has been applied. The bright full Moon is also visible in the frame, hanging beneath a layer of cloud.