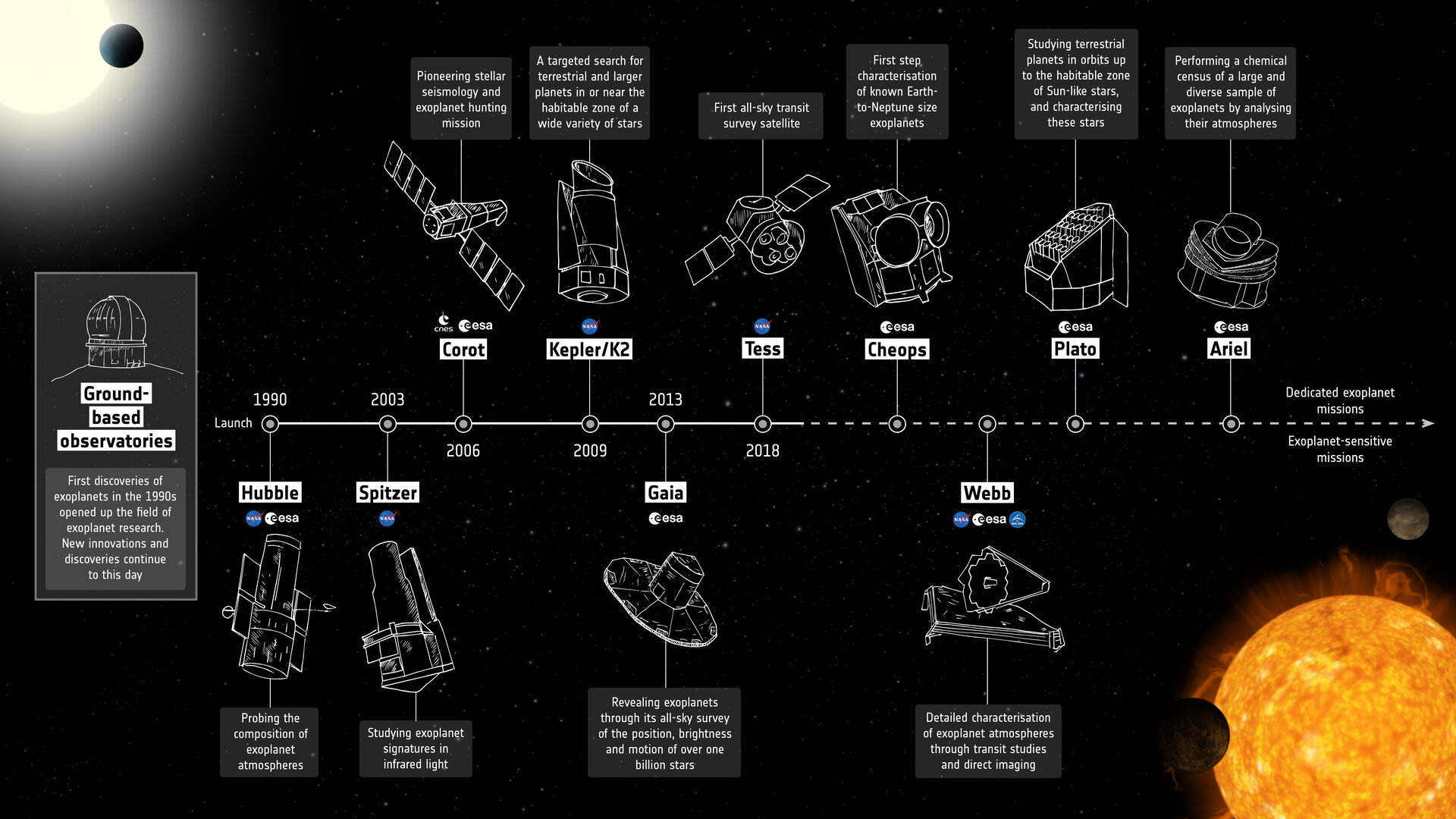 The first discoveries of exoplanets in the 1990s, by ground-based observatories, completely changed our perspective of the Solar System and opened up new areas of research that continues today. This infographic highlights the main space-based contributors to the field, including not only exoplanet-dedicated missions, but also exoplanet-sensitive missions, past, present and future.

One of the first exoplanet-sensitive space telescopes was the CNES-led Convection, Rotation and planetary Transits mission, CoRoT, which launched in 2006. While focused on studies of stars, it uncovered exoplanets using the transit method.

NASA’s 2009 Kepler mission is an exoplanet discovery machine, accounting for around three-quarters of all exoplanet discoveries so far. It looks at a specific patch of sky for a lengthy period of time, so is sensitive to a great number of faint stars.

Meanwhile, telescopes that were launched even before the first discoveries were confirmed, such as the NASA/ESA Hubble Space Telescope, have been contributing to the evolving field.

ESA’s Gaia mission, through its unprecedented all-sky survey of the position, brightness and motion of over one billion stars, is providing a large database to search for exoplanets. These will be uncovered through the changes in the star’s motion as the planet or planets orbit around it, or by the dip in the star’s brightness as the planet transits across its face.

The most recent addition to the exoplanet-hunting fleet is NASA’s Transiting Exoplanet Survey Satellite, Tess, launched in April 2018. It is the first all-sky transit survey satellite.

But discovering an exoplanet is just the beginning: dedicated telescopes are needed to follow up on this ever-growing catalogue to understand their properties, to get closer to knowing if another Earth-like planet exists, and better understanding what conditions are needed for planet formation and the emergence of life.

ESA is launching three dedicated exoplanet satellites in the next decade, each tackling a unique topic.

The Characterising Exoplanet Satellite, Cheops, will observe bright stars known to host exoplanets, in particular Earth-to-Neptune-sized planets, anywhere in the sky. By knowing exactly where and when to look for transits, and being able to return to repeatedly observe the same targets, Cheops will become the most efficient instrument to study individual exoplanets. It will record the precise sizes of these relatively small planets and combined with mass measurements already calculated from other observatories, will enable the planet’s density to be determined, and thus make a first-step characterisation of the nature of these worlds.

Cheops will also identify candidates for additional study by future missions. For example, it will provide well-characterised targets for the international James Webb Space Telescope, which will perform further detailed studies of their atmospheres.

Plato, the PLAnetary Transits and Oscillations of stars mission, is a next-generation planet hunter with an emphasis on the properties of rocky planets up to the habitable zone around Sun-like stars – the location from a star where liquid water can exist on the planet’s surface. Importantly, it will also analyse the planet’s host star, including its age, and thus give insight into the evolutionary state of the entire extrasolar system.

Ariel, the Atmospheric Remote-Sensing Infrared Exoplanet Large-survey mission, will perform a chemical census of a large and diverse sample of exoplanets by analysing their atmospheres in great detail.

With the complementary work of both ground- and space-based observatories, we will get closer to understanding one of humanity’s biggest questions: are we alone in the Universe?