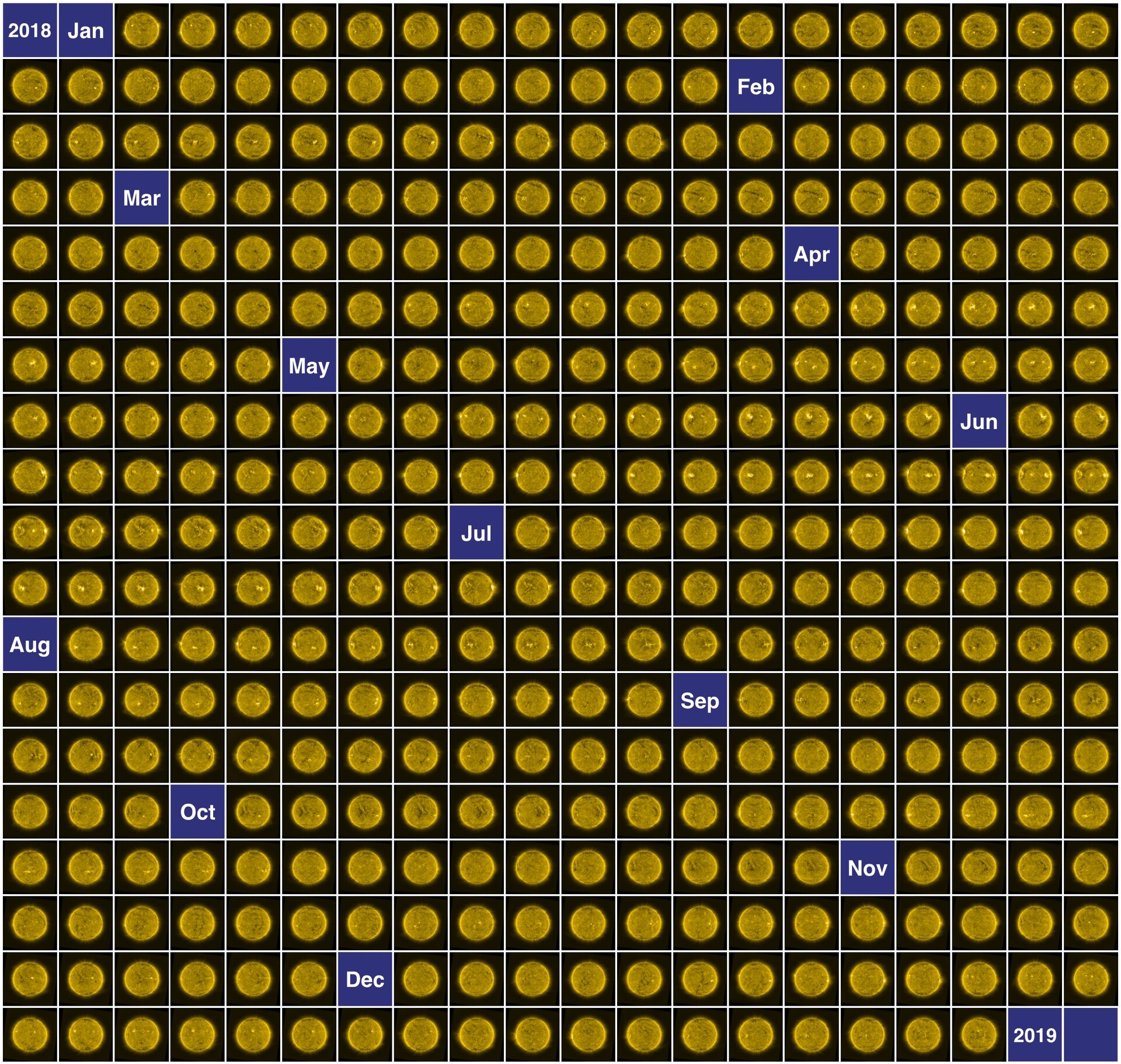 This montage of 365 images shows the changing activity of our Sun through the eyes of ESA’s Proba-2 satellite during 2018. The images were taken by the satellite’s SWAP camera, which works at extreme ultraviolet wavelengths to capture the Sun’s hot turbulent atmosphere – the corona, at temperatures of about a million degrees.

The satellite is continuously monitoring the Sun – one image was selected to represent each day of the year. Click here for an animated version.

The Sun typically follows an 11 year cycle of activity, and throughout 2018, it embraced its solar minimum, displaying few active regions – seen as the bright regions in the images.

One way to assess the level of activity is by counting sunspots (dark spots in the images), or recording the strength of solar flares. The most energetic flare of 2018 was recorded on 7 February, from a small region located at central latitudes in the eastern hemisphere of the Sun (to the left of the centre of the Sun in the corresponding image).

It was classed as a ‘C-8.1’ in the classification system that divides solar flares according to their strength. The smallest are A, followed by B, C, M and X, with each letter representing a ten-fold increase in energy output such that an X-class flare is 100 times stronger than a C-class flare.

M and X flares, along with coronal mass ejections that launch vast clouds of solar matter out into space, can create such powerful bursts of radiation that if directed towards Earth have the potential to create geomagnetic storms that can disrupt our communication systems and power grids, and can harm satellites. This is one of the reasons why it is so important to continuously monitor the Sun – to be able to prepare for and mitigate the adverse effects of space weather.

But the solar minimum is a useful time for studying the evolution of active regions without the complication of overlapping and interacting regions. Active regions can persist for days to months, and are observed to rotate across the Sun’s face many times.

The Sun, and the Sun-Earth interaction, is the focus for a number of active ESA and NASA missions, including – in addition to Proba-2 – ESA’s Cluster satellite quartet, the ESA-NASA Solar and Heliospheric Observatory (SOHO), NASA’s Solar Dynamics Observatory, and more recently, NASA’s Parker Probe. Planned for launch next year, ESA’s Solar Orbiter will provide close-up views of the Sun’s polar regions, which is key for better understanding the solar cycle, and will also be able to watch activity building up on the side not visible from Earth.

Interested to learn more about space weather and the Sun’s influence on our daily lives – plus have the opportunity to watch for aurora? Then apply here to join ESA’s SocialSpace #AuroraHunters event in Tromsø, Norway 3-5 March.