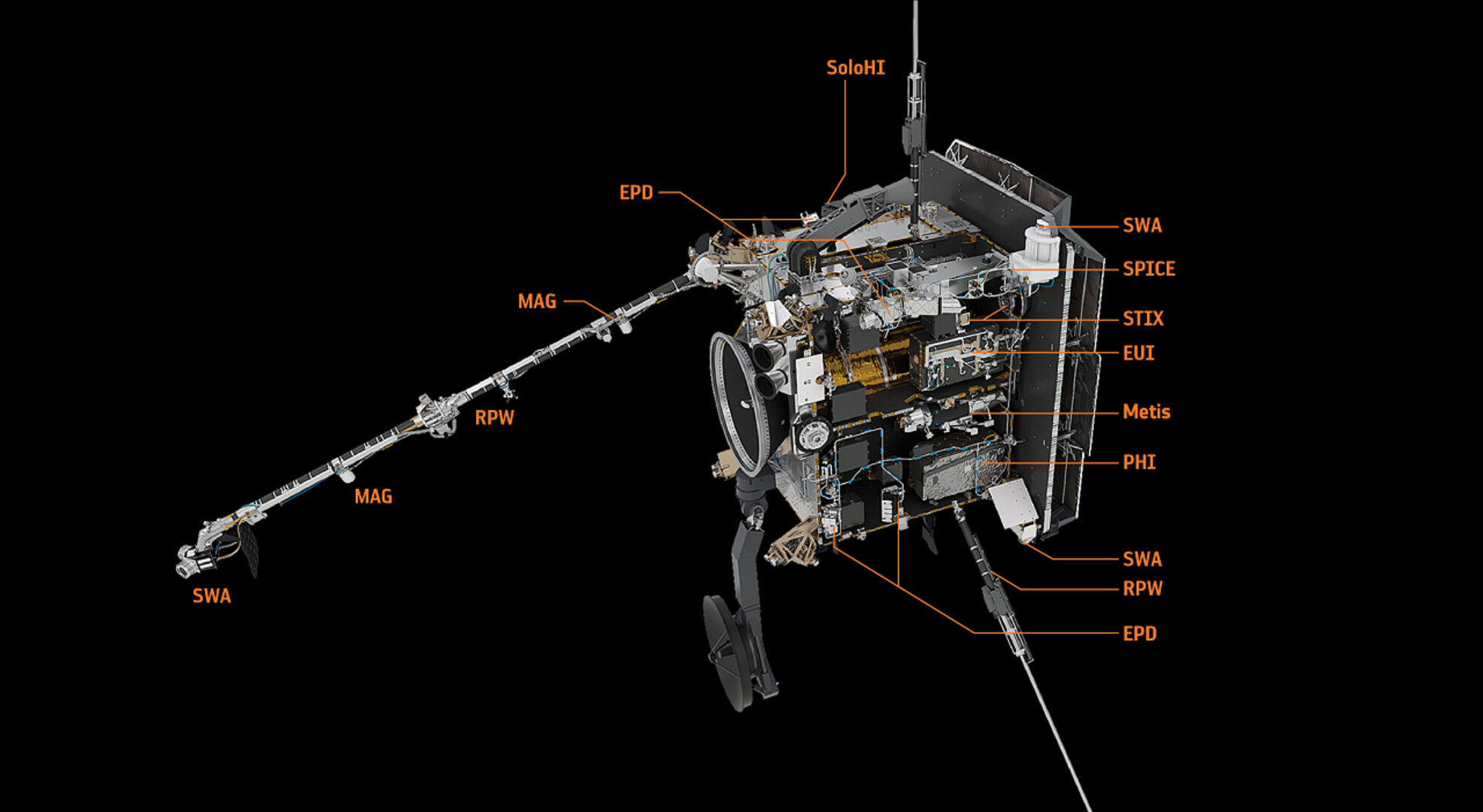 Labelled diagram showing a cutaway of Solar Orbiter's suite of ten science instruments that will study the Sun. There are two types: in situ and remote sensing. The in situ instruments measure the conditions around the spacecraft itself. The remote-sensing instruments measure what is happening at large distances away. Together, both sets of data can be used to piece together a more complete picture of what is happening in the Sun’s corona and the solar wind.

The in situ instruments:

EPD: Energetic Particle Detector
EPD will measure the energetic particles that flow past the spacecraft. It will look at their composition and variation in time. The data will help scientists investigate the sources, acceleration mechanisms, and transport processes of these particles. Principal Investigator: Javier Rodríguez-Pacheco, University of Alcalá, Spain

MAG: Magnetometer
MAG will measure the magnetic field around the spacecraft with high precision. It will help determine how the Sun’s magnetic field links to the rest of the Solar System and changes with time. This will help us understand how the corona is heated and how energy is transported in the solar wind. Principal Investigator: Tim Horbury, Imperial College London, United Kingdom

RPW: Radio and Plasma Waves
RPW will measure the variation in magnetic and electric fields using a number of sensors and antennas. This will help to determine the characteristics of electromagnetic waves and fields in the solar wind. RPW is the only instrument on Solar Orbiter that makes both in situ and remote sensing measurements. Principal Investigator: Milan Maksimovic, LESIA, Observatoire de Paris, France

SWA: Solar Wind Plasma Analyser
SWA consists of a suite of sensors that will measure the solar wind’s bulk properties, such as density, velocity and temperature. It will also measure the composition of the solar wind. Principal Investigator: Christopher Owen, Mullard Space Science Laboratory, United Kingdom

EUI: Extreme Ultraviolet Imager
EUI will take images of the solar chromosphere, transition region and corona. This will allow scientists to investigate the mysterious heating processes that take effect in this region and will allow connecting in situ measurements of the solar wind back to their source regions on the Sun. Principal Investigator: David Berghmans, Royal Observatory Belgium.

Metis: Coronagraph
Metis will take simultaneous images of the corona in visible and ultraviolet wavelengths. This will show the structure and dynamics of the solar atmosphere in unprecedented detail, stretching out from 1.7 to 4.1 solar radii. This will allow scientists to look for the link between the behaviour of these regions and space weather in the inner Solar System.
Principal Investigator: Marco Romoli, INAF – University of Florence, Italy

PHI: Polarimetric and Helioseismic Imager
PHI will provide high-resolution measurements of the magnetic field across the photosphere, and maps of its brightness at visible wavelengths. It will also produce velocity maps of the movement of the photosphere that will allow helioseismic investigations of the solar interior, in particular the convective zone. Principal Investigator: Sami Solanki, Max-Planck-Institut für Sonnensystemforschung, Germany

SoloHI: Heliospheric Imager
SoloHI will take images of the solar wind by capturing the light scattered by electrons particles in the wind. This will allow the identification of transient disturbances in the solar wind, such as the type that can trigger a coronal mass ejection, in which a billion tons of coronal gas can be ejected outwards into space.
Principal Investigator: Russell A. Howard, US Naval Research Laboratory, Washington, D.C., USA

SPICE: Spectral Imaging of the Coronal Environment
SPICE will reveal the properties of the solar transition region and corona by measuring the extreme ultraviolet wavelengths given off by the plasma. This data will be matched to the solar wind properties that are subsequently detected by the spacecraft’s in situ instruments. European-led facility instrument; Principal Investigator for Operations Phase: Frédéric Auchère, IAS, Orsay, France

STIX: X-ray Spectrometer/Telescope
STIX will detect X-ray emission coming from the Sun. This could be from hot plasma, often related to explosive magnetic activity such as solar flares. STIX will provide the timing, location, intensity, and energy data for these events so that their effects on the solar wind can be better understood. Principal Investigator: Säm Krucker, FHNW, Windisch, Switzerland