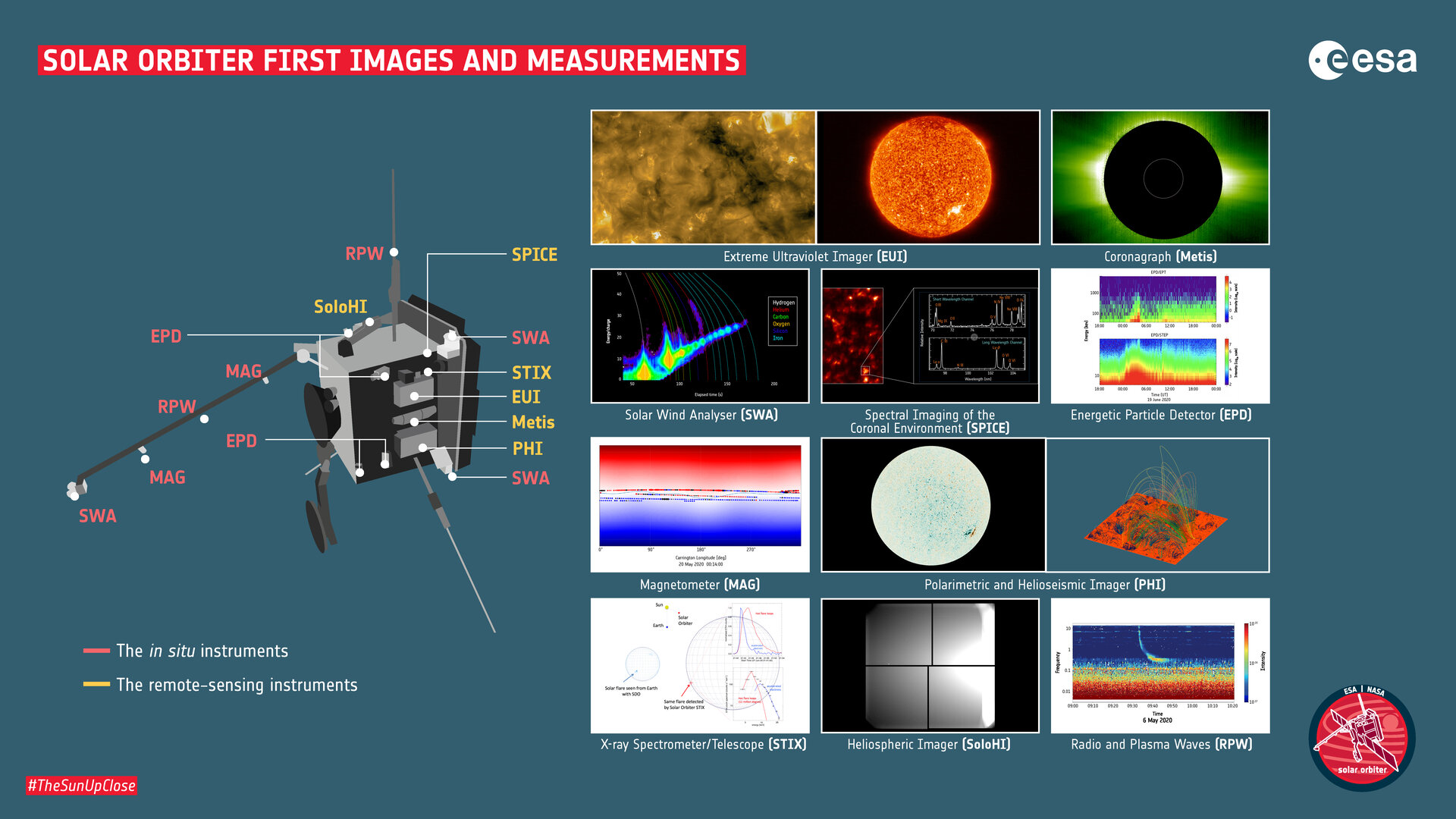 ESA’s Solar Orbiter carries a suite of ten instruments that work together to provide a coherent picture of solar activity and how that propagates into the wider Solar System, including particles that flow out into the Solar System as the solar wind.

To study these phenomena, the instruments are grouped into two families: the in situ instruments and the remote-sensing instruments. This graphic summarises the first images and data gathered by all instruments as the mission completed its commissioning phase. These include some of the instrument first light images, obtained between May and June 2020.

The remote-sensing instruments look directly at the Sun, or slightly to one side to see the Sun’s surface and its outer atmosphere, the corona, while the in situ instruments measure the solar wind as it flows around the spacecraft.

The Extreme Ultraviolet Imager (EUI) provides images of the transition from the lower part of the Sun’s atmosphere to the base of the solar corona.

The Metis coronagraph blocks the light from the solar surface, so that the fainter outer atmosphere of the Sun, the corona, can be seen.

The Solar Wind Analyser (SWA) characterises the main properties of the solar wind, including the bulk properties of its particles such as density, velocity, and temperature.

The Spectral Imaging of the Coronal Environment (SPICE) instrument studies the corona seen in front of the Sun’s disc.

The Energetic Particle Detector (EPD) instrument measures the composition, timing and other properties of energetic particles from solar eruptions.

The Magnetometer (MAG) measures the magnetic field in the solar wind as it flows past the spacecraft.

The Polarimetric and Helioseismic Imager (PHI) measures the magnetic field at the Sun’s surface and allows the investigation of the Sun’s interior via the technique of helioseismology.

The Heliospheric Imager (SoloHI) instrument images disturbances in the solar wind allowing giant eruptions known as coronal mass ejections to be tracked as they erupt from the Sun.

The Radio and Plasma Waves (RPW) instrument measures magnetic and electric fields to determine the wave motions and their interactions with the charged particles of the solar wind.