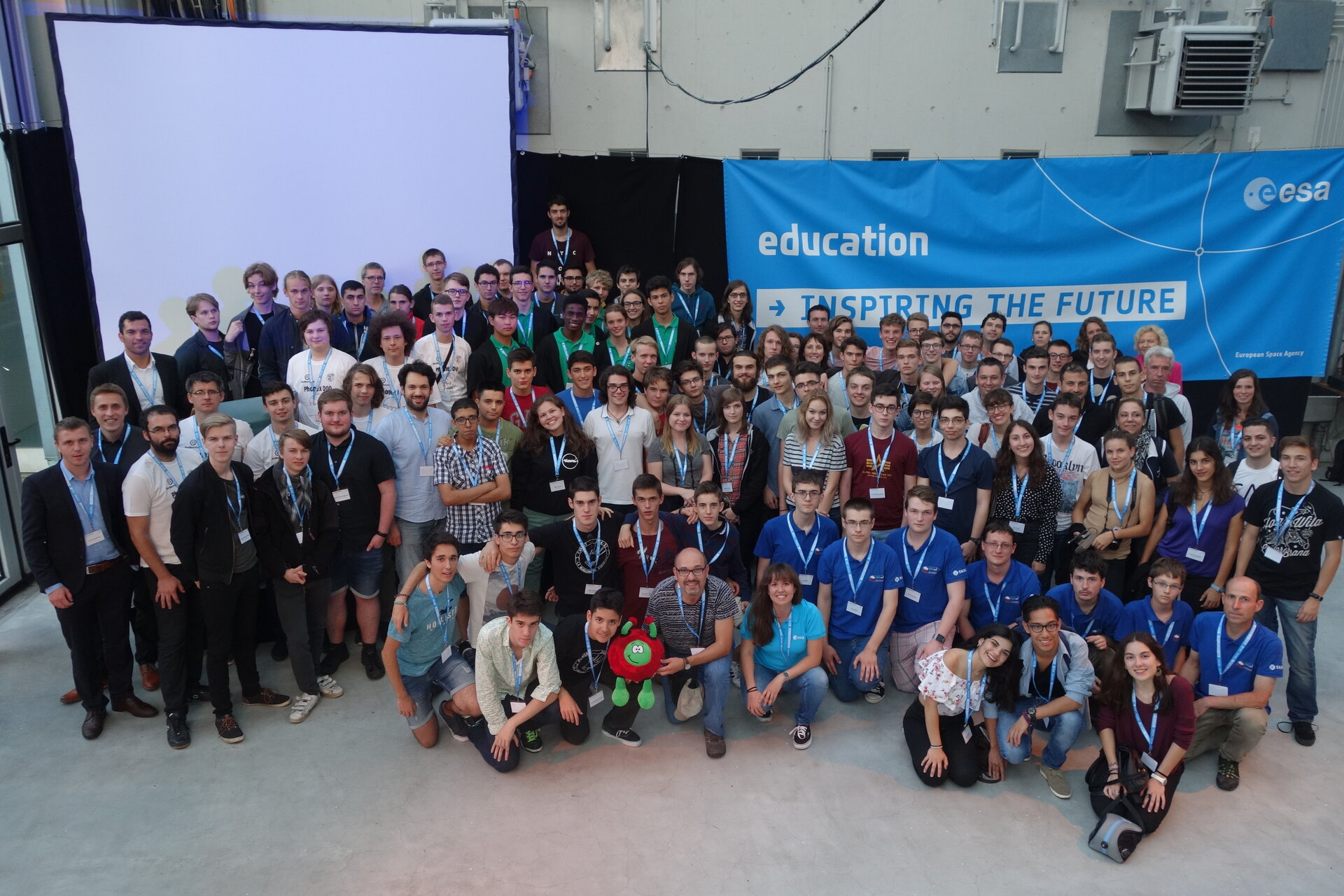 This week 15 teams have gathered in Germany to participate in the 2017 European CanSat competition. 13 national competition winners, together with two national teams selected by ESA, will take part in an exciting launch campaign hosted at the Rotenburg Airfield & ZARM facilities, from 28 June to 2 July.

Follow us on our social media for updates and stay tuned to learn about how the teams are doing! Here is the programme all the students will go through:

The teams have already done a great job developing and submitting their Pre-Launch Report, like space professionals do. The reports have been reviewed by the Jury Members and will be taken into account in the final scoring.

All teams have to perform a ‘primary mission,’ which consist of measuring atmospheric temperature and pressure during their CanSat’s descent. Additionally, they will perform a ‘secondary mission’, to design which they have given free rein to their imagination! Here is what they have prepared this year:

AcidaSat (Country: Switzerland, School: Technische Fachschule Biel)
Their secondary mission is to safely land their CanSat with a motorised system. Four rotors on the CanSat generate a downwards force to control the descent. The landing will be completely controlled on board with no external communication with the CanSat. Furthermore, they will collect data from multiple positioning sensors during the flight to generate an animation afterwards.

C.A.N.I.S (Country: Greece, School: 26th Lyceum of Athens)
The aim of their secondary mission is to turn their CanSat into a useful tool that monitors forest fires and transmits the data to a fire brigade. The task will be completed by using a camera that is able to detect near infrared radiation. The main objective of their secondary mission is to detect a forest fire and especially the area it affects.

Canny Potter (Country: Ireland, School: St Columba’s College, Dublin)
The primary objective of their mission is to gather essential data on descent through the atmosphere and evaluate the data in terms of abiotic factors. Abiotic factors include suitable temperature, pressure, and moisture content; these are key enablers for the existence of life. Terrestrial evaluation will be used as a guide for the development of a probe suitable for launch on the moons of the outer solar system.

CANpernicus (Country: Poland, School: ZS UMK Gimnazjum i Liceum Akademickie, Toruń)
The team’s main goal is to determine the possibility of life’s existence on a planet, or on other words, to find conditions similar to the Earth’s. They will check for conditions most suitable for life as we know it, and in order to do so they will measure, humidity, light intensity, magnetic field intensity and CO2 concentration. Furthermore, try to perform a targeted landing.

FluoSat (Country: Italy, School: Liceo Scientifico A. Tassoni, Modena)
Their secondary mission is based on a spectroscopy experiment: they are going to measure the temperature of the sample and adjust it in order to keep the fluorescent emission of the sample constant, that changes with temperature. Their final goal is to put an E. Coli bacteria modified GFP culture into the CanSat, that can be altered to produce useful substances for the human body, for example insulin.

Greetings from Space (Country: The Netherlands, School: Bertrand Russell College, Krommenie)
Their secondary mission is to 'discover a new planet' and to sketch an image of the so-called planet with camera images and collected data. With the temperature, air pressure, and percentage of oxygen in the air, they want to conclude if life is possible on this planet. They have as well designed a landing system so that their CanSat will land in a pre-determined position.

GWC CanSat (Country: The UK, School: George Watson’s College, Edinburgh)
In general terms, the team has divided their CanSat goals into two categories. Firstly, they have designed their CanSat to monitor general atmospheric trends, via temperature, barometric pressure, and humidity sensors. Secondly, their CanSat is also capable of constructing a heat map of the surface below. In order to accomplish this goal, their CanSat needs to be able to precisely track its orientation and position, as well as measure temperature of the ground surface below the CanSat.

Raj Sat (Country : Czech Republic, School : Junak - cesky skaut, Dvojka Praha)
Their goal is to build a universal probe that measures air temperature and pressure and any other physical quantities thanks to its ability to connect many separate modules. During RAJsat4’s flight, they will measure the quantity of air contaminants, acceleration, rotation, magnetic field, radiation intensity, and GPS data. They also want to provide multiple ways of locating their CanSat after the flight.

Recognize (Country: Germany, School: Alexander-von-Humboldt-Gymnasium, Bremen)
In the flight mode their CanSat will pictures of the surface below and saves these pictures on the onboard USB-Stick (PiCam V2). At the same time, it will measure the barometric pressure, temperature, the calculated altitude (data from BMP280) and data of its positioning (data from the Ultimate GPS and BNO). The images will be analysed by feature-matching and neural network programmes.

SpaceWalk (Country: Belgium, School: Collège Saint-Remacle, Stavelot)
Spacewalk have created a robot, named “Fixy”, that checks the proper functioning of the primary mission. It will hooks up to it and will be powered by an engine. It will connect to the different components (temperature, pressure and humidity sensors, battery, transmitter, etc.) and send an analysis of the state of the hardware in real time during the flight.
Tomis III (Country: Romania, School: Constanta, Mircea cel Batran Highschool)
For the secondary mission, they are going to conduct a complex analysis of a given environment, through the study of air, soil, and characteristics of electromagnetic radiation, in order to determine the habitability of the environment.

ZenSat Club (Country: Hungary, School: Bolyai High School, Senta)
Their secondary mission is to design and construct a GPS meteorological dropsonde, as well as equip it with additional sensors (IR thermometer, UV radiation) and camera. After the CanSat competition, they plan to use the modified version of the dropsonde for vertical profile measurements in rural and urban area using UAVs, multicopters, and kites.

Good luck to all the teams and let the 2017 European CanSat Competition begin!