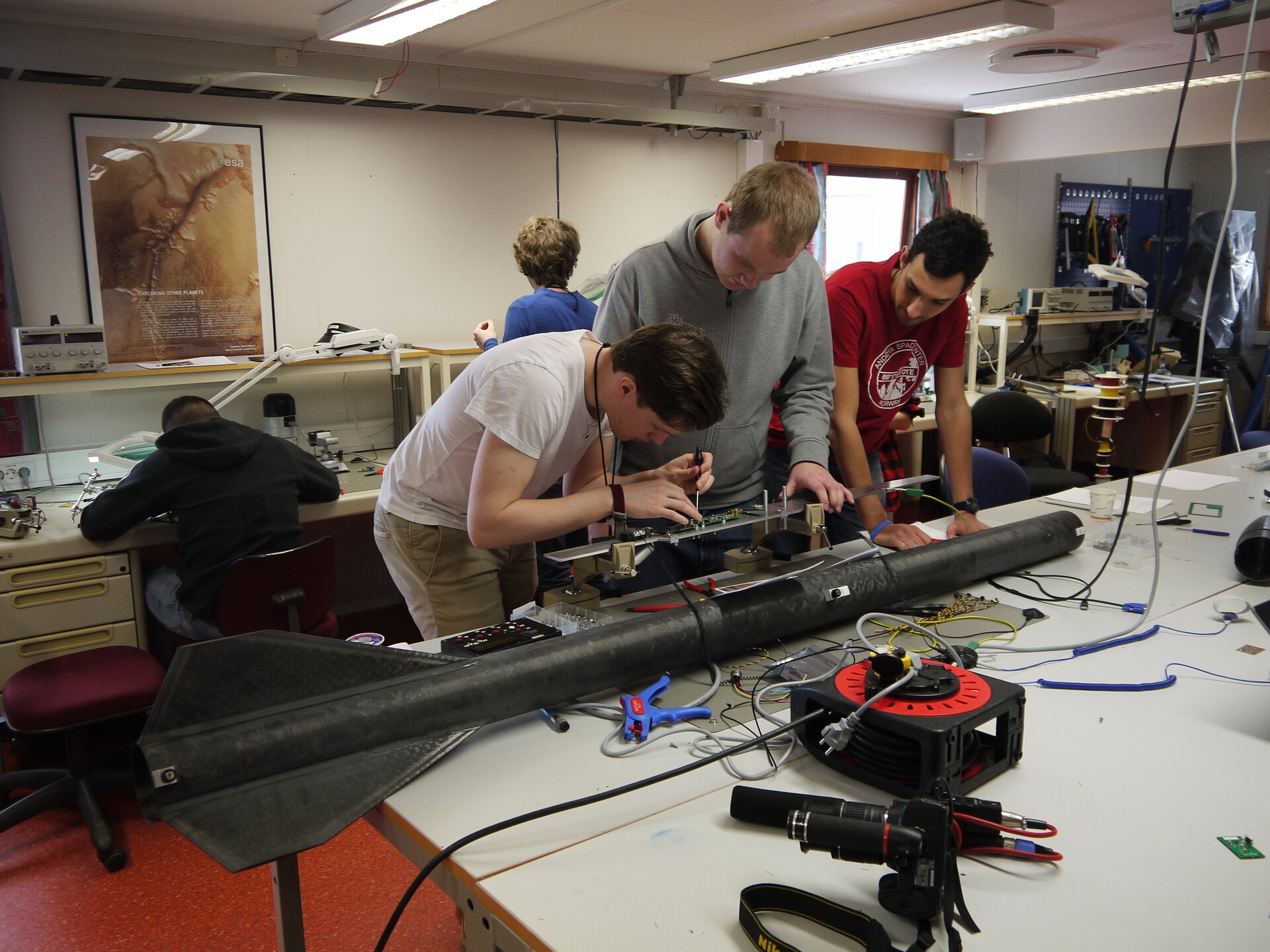 The dream of launching a rocket  almost came true for 20 students at the Andøya rocket range in Northern Norway  on the 30th of March 2017 . The students were part of ESA’s first “Fly a Rocket!” programme. They were forced to postpone the launch due to high winds at around 5km but will try again later in the year.

Aimed at younger university students who may not necessarily be studying aerospace engineering or science, “Fly a Rocket!” is designed to showcase the opportunities available in the space sector. In this way it will encourage students to consider future career and educational opportunities in science, technology, engineering and/or mathematics.

The response to the call for applications was huge. ”It was really inspiring to see the interest in this pilot programme from all over Europe and across a wide range of universities and study areas,” says Alexander Kinnaird, Programme Coordinator, ESA Education and Knowledge Management Office.

Choosing just 20 individuals was a difficult task. Once the final roll call was decided upon, with each individual coming from a different ESA member or cooperating state, the students were required to complete an on-line training and learning course covering the principles of rocket flight, satellite dynamics and the use of satellites as tools for Earth observation.

As part of their application, they had indicated which role they were interested in performing during the launch campaign: anything from working on the communications with the rocket, or the payload, or simulating and analyzing the rocket flight.

The ‘Fly a Rocket!’ opportunity was being offered in collaboration with the Norwegian Centre for Space-related Education (NAROM), and the Norwegian Space Centre (Norsk Romsenter).

During the on-line course, the students had access to help from NAROM and ESA experts and ESA set up a social media group so that the students could virtually meet each other.

The students also undertook outreach campaigns to promote STEM subjects, particularly space and the activities of ESA, within their own countries. These activities ranged from stalls and talks in local high schools, to local and national newspaper articles and public events such as ‘space days’.

On 26th March, the team came together for real to assemble and launch the rocket. They called the rocket Volare 1 which in Italian language means for "to fly".

Supported by the Andøya Rocket Range staff, NAROM and ESA, the students were involved at all stages of the launch campaign, from assembling the rocket payload and the rocket itself, calibrating the communications equipment, and running the operations tower during the actual countdown.

In the days surrounding the launch, they also received a number of lectures from space experts and performed hands on activities to further their understanding of rocketry and space exploration including launching more model rockets and test firing a novel hybrid motor.

On the day of the launch, the students released a balloon to test the atmospheric conditions. On reviewing the data, the Range Safety Officer determined that the winds at an altitude of 5km were too high to safely launch the rocket.

The students analysed the balloon data themselves and saw the dangers of launching with winds too high. The attempt was postponed. The students rapidly became accustomed to the reality of launch 'holds', ‘roll-backs’, ‘restarts’ and eventually ‘scrubs’.

For the next two days the students remained on stand-by to restart the countdown. The Andøya staff continued to launch balloons but the winds never dropped low enough to make a launch attempt and the students returned home with the rocket still on the ground.

This in itself was a valuable lesson. Launch delays due to inclement weather are a common occurrence.

"ESA's Fly a Rocket was full of surprises. The biggest disappointment was not being able to actually launch the rocket. Yet we had the chance to complete the assembly of the rocket, take a bath in the arctic ocean and be enthralled by auroras!" says Killian

"Before I came on the campaign building a rocket seemed to be as far as the aurora we've seen on the sky. The campaign for me was like climbing up the mountain behind the space centre: even though it still looks like a long way to be able to fully design even a small sounding rocket, a hew horizon appeared and it's very exciting!" says Adam

"It was nothing like I expected - we had really close contact with professionals from ESA, NAROM and I expected it to be a lot more distant. We learnt a lot from people who are actually in the industry" says Gonçalo

The ESA Education office is now in discussion with NAROM and the Andøya space centre to launch the rocket at a later date with the students following on live-stream video and receiving their telemetry data over the internet.