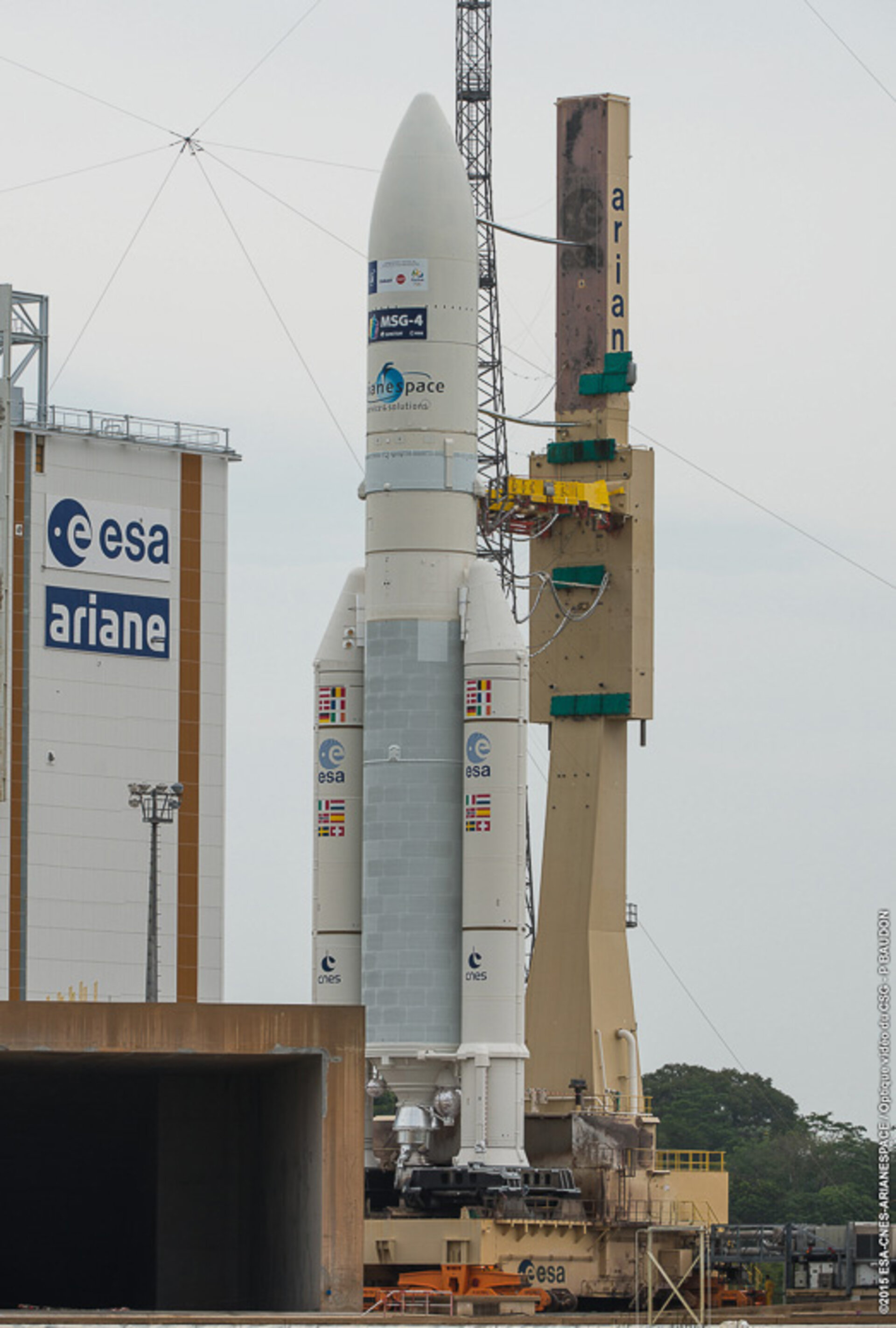 On 15 July, a powerful Ariane launcher will loft Europe’s final Meteosat Second Generation weather satellite into orbit from Kourou, French Guiana. For the mission control team at ESA, liftoff will mark the end of months of careful preparations and the start of the mission’s first critical phase.

In a 37-minute window starting at 21:42 GMT (23:42 CEST), Europe’s fourth and final Meteosat Second Generation (MSG) satellite will ride into space on a 55 m-tall Ariane 5 rocket together with co-passenger Star One C4, a telecoms satellite for Embratel. The dual launch had previously been set for 8 July, but was delayed by Arianespace due to last-minute precautionary checks on the rocket and spacecraft.

Once in geostationary orbit above Europe, MSG-4 will ensure data continuity for weather forecasting, and will also play a crucial role in ‘nowcasting’ high-impact weather events and climate research. All four MSGs are operated by Eumetsat – the European Organisation for the Exploitation of Meteorological Satellites – with ESA responsible for their design, development and in-orbit delivery.

This means that a team from ESA’s European Space Operations Centre, ESOC, Darmstadt, Germany, will assume control of MSG-4 immediately after separation and oversee its first 12 days in space – the critical launch and early orbit phase (LEOP) – before handing control over to Eumetsat.

The first passenger, Star One C4, will separate from Ariane’s upper stage 28:15 minutes into flight, followed by MSG-4 at 40:22 minutes.

Separation marks the first occasion that the ESOC mission controllers can start sending telecommands to MSG-4 via the Malindi station in Kenya, performing the initial satellite configuration activities like switching on the attitude sensors.

Thruster burns and spinning up

Starting at about four hours into flight, MSG-4, which is released from the launcher spinning at 5 rpm, will be spun up to 55 rpm, and the satellite will perform a number of slews about its rotational axis to orientate itself correctly. These activities will continue into the second day in orbit.

Starting on 17 July, the satellite will conduct the first of four crucial apogee motor burns, approximately one per day, to circularise its initially highly elliptical orbit. Each burn will last between around 80 seconds and 20 minutes.

Between 22 and 25 July, the protective covers on the camera will be discarded and the satellite will be spun up to its normal rotation of 100 rpm. The camera’s primary mirror will be unlocked and the instrument switched on and decontaminated.

If all goes as planned, by 26 July, the LEOP activities will come to an end with the satellite fully functional and located in its planned geosynchronous orbital slot some 36 000 km above Europe. It will then be handed over to Eumetsat for payload commissioning, preparing MSG-4 to serve as the in-orbit ‘hot backup’ to its three sibling satellites, which were all shepherded into orbit by ESOC.

Timeline below is forecast only and all times are subject to change. Timeline assumes liftoff at start of 37-minute window at 23:42 CEST; times will be shifted accordingly if the liftoff occurs later in the window. See abbreviations at bottom of page. Access an expanded version via ESA’s Rocket Science blog.

Note: Ariane launcher is also tracked by Natal, Ascension, Libreville ground stations. These are not indicated in this timeline.