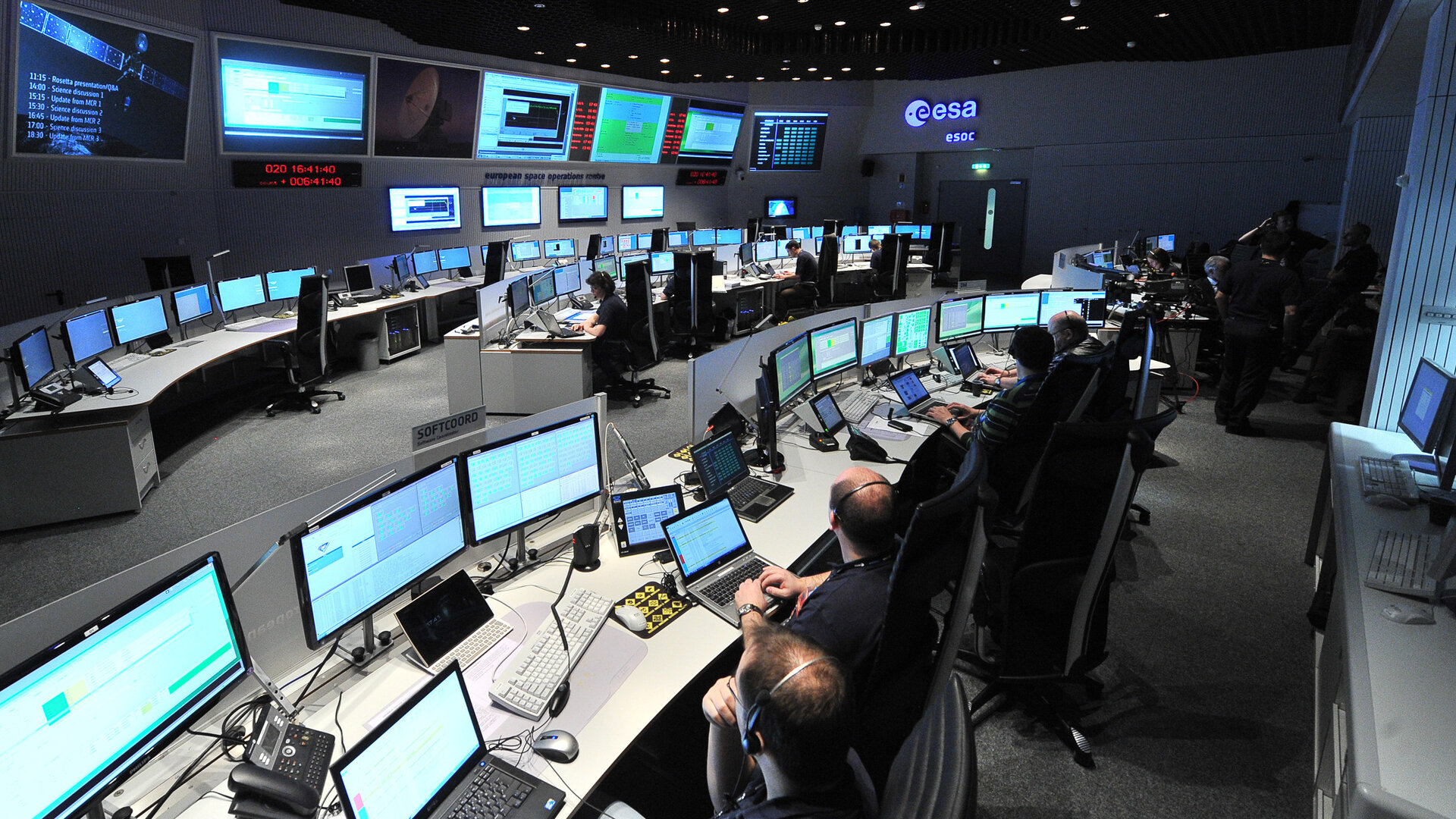 Following last week’s wake-up of the Rosetta comet-chaser, ESA’s flight controllers have conducted the first in a series of health checks aimed at assessing how well it came through 31 months of hibernation.

After its long deep-space hibernation, Europe’s Rosetta spacecraft woke up on 20 January to begin the final leg of its 10-year journey to comet 67P/Churyumov–Gerasimenko.

Its first signal was received at 18:18 GMT (19:18 CET) at ESA’s control centre in Darmstadt, Germany. Receipt confirmed that Rosetta had exited hibernation, warmed up and – as planned – switched itself into ‘safe mode’, a basic level of functionality, transmitting a simple radio tone via its S-band transmitter and waiting for instructions from Earth.

Within several hours, the Flight Control Team had established full control, switching on the more powerful X-band transmitter. This allowed high-rate housekeeping information to provide a detailed look at the health and status of crucial propulsion, attitude-keeping and power systems, among many others.

“We were most concerned about power, and seeing if the solar arrays were generating sufficient electricity to support the planned recommissioning activities,” says Andrea Accomazzo, Spacecraft Operations Manager.

“But even though we were still 673 million km from the Sun, we were getting enough power and the arrays appear to have come through hibernation with no degradation.”

Since then, several days of detailed checks have allowed the team to determine that the rest of the comet-chaser’s systems are also working as expected.

Reactivation of three of the four reaction wheels – spinning gyroscopes used to control attitude – went flawlessly. The fourth wheel should be reactivated in the coming weeks.

“We are now back online with a fully functional spacecraft,” reports Andrea.

The next few weeks will be dedicated to testing and configuring onboard flight systems, including the solid-state mass memory, used to store science and operations data prior to download.

Catching Rosetta's wake-up signal using one of NASA's 70 m-diameter dishes was not without challenges.

Even after 31 months of no contact, however, the team at ESOC could predict the spacecraft's location in the sky to within just 2000 km at a distance of 807 million km – equivalent to a tiny fraction the size of a full Moon.

"We're now recording tracking station data and in a few days will be able to conduct the first full orbit determination since wake up," says Frank Dreger, Head of Flight Dynamics at ESOC.

The next phase, lasting through April, will see science teams recommissioning Rosetta’s 11 scientific instruments. This will be done on individual schedules coordinated by the Rosetta Mission Operations Centre in ESOC.

In March, Rosetta’s lander, Philae, will also be switched on for the first time since hibernation. It, too, will be recommissioned to confirm its control systems and 10 instruments are working.

“Over the next three months we will be making sure that each instrument is ready to perform once we finally arrive at the comet, after 10 years journeying through the Solar System,” says Fred Jansen, Rosetta Mission Manager.

Matt Taylor, Rosetta Project Scientist, adds: “Rosetta is equipped with a range of experiments that will tell us everything about the characteristics of this comet and how its behaviour changes as we get closer to the Sun, ultimately giving us a better picture of the role comets have played in our Solar System’s evolution.”

Starting in February, status updates will be posted regularly in the Rosetta blog.