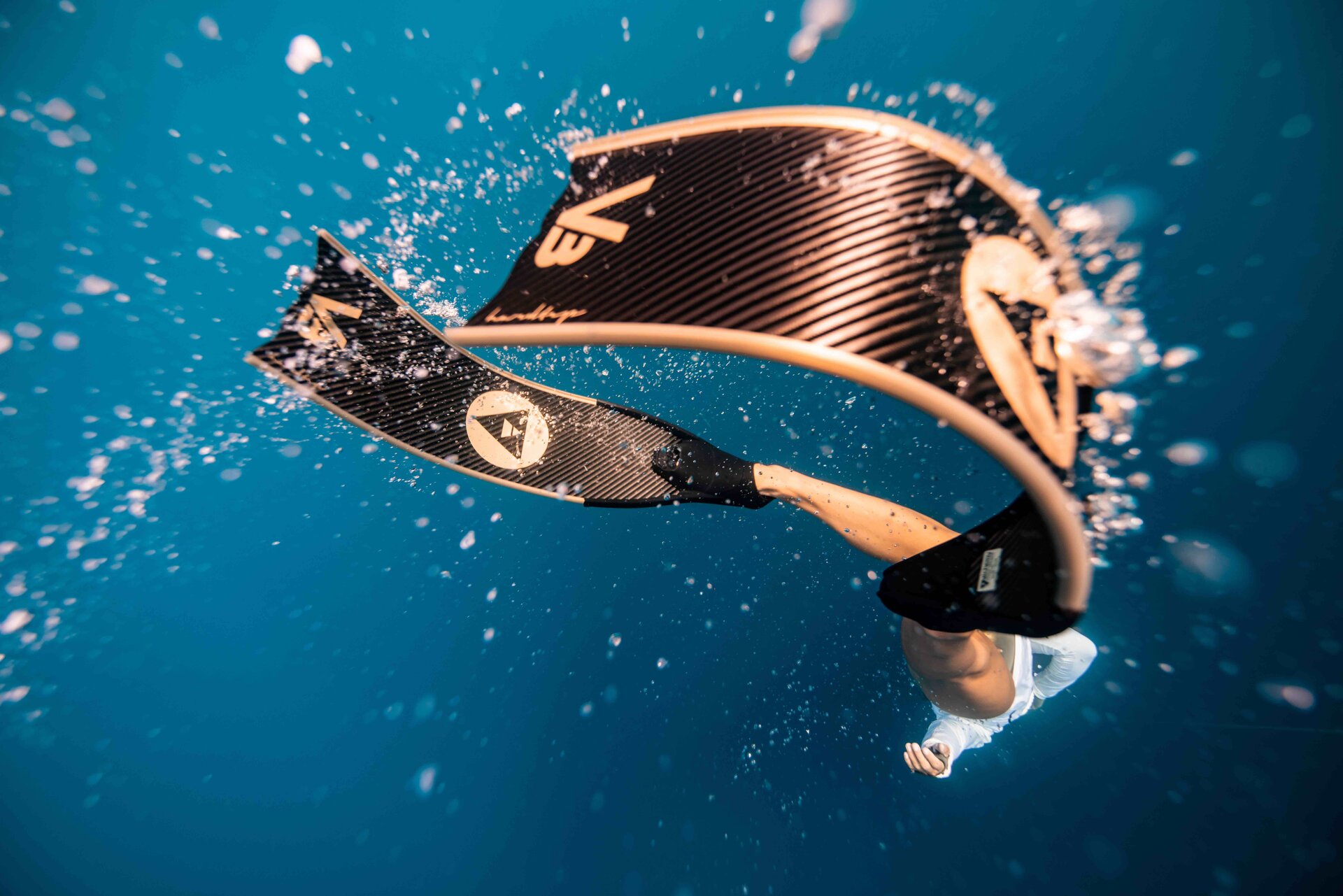 Adding microscopic nano-materials to carbon fibre composites has resulted in stronger, tougher fins for divers. A space material company teamed up with a market leader in the design and production of free-diving and spear-fishing equipment through ESA’s Technology Transfer and Patent Office.

An idea originally championed by inventors from Leonard da Vinci to Benjamin Franklin, before finally reaching mass production during the last century, diving fins increase the efficiency of every move made in water. Generally speaking, the deeper you go, the more power you need from your fins.

“Cheap fins for swimming close to the beach are made from rubber or plastic”, explains Dimitris Pantazis of underwater equipment specialist Alchemy. “High-end fins for spearfishing or free-diving are made from tough carbon fibre composite, but these can be damaged in some circumstances, such as by hitting rocks or coral, or else accidentally impacted as people travel to dive sites.

“Such damage can go on to propagate cracks, and when you kick really hard your fin might break – which is the last thing you want when you’re deep underwater.”

To prevent this, Alchemy teamed up with Adamant Composites through an ESA Technology Transfer Proof of Concept project, investigating the addition of nano-materials to composite fins. Testing by the two Greek companies show the addition of this ingredient results in tougher, more resilient fins.

Carbon fibre composites form some of the strongest materials known in terms of strength, stiffness and temperature resistance. They are made by laying carbon fibres down into a weave pattern before being placed into a binding ‘matrix’ material, such as epoxy resin, which is then moulded into its desired shape and baked into its final form.

Originally developed during the 1960s space age, carbon composites remain a key space material to this day, while also found in everything from Formula One racing cars to fighter jets, bicycle frames to golf clubs – as well as high-end fins.

“Our company began in 2012, coming out of research on how to integrate nano-materials, on the scale of billionths of a metre, into composite materials,” says Thanos Baltopoulos of Adamant Composites.

“At that time it was clear that by adding such nano-materials as carbon nanotubes and metal or ceramic nano-particles in various different ways the performance and functionality of a given composite can be optimised, to deliver enhanced strength, energy absorption and thermal or electrical conductivity.”

For space, Adamant Composites together with ESA identified the need to tailor the properties of conventional composite materials to meet the special needs of missions, such as for higher thermal performance.

“Adamant Composites used nano-species to improve one or more characteristics of high end composites,” explains ESA materials engineer Laurent Pambaguian. “The concept of ‘made to measure’ materials has been matured within ESA funded projects, until they can today be applied in several industrial fields.”

Through ESA-led research a methodology was developed to create composite materials made-to-measure for the application’s needs. The methodology comprises both material design and technologies to process such materials effectively. The result is a formulation tailoring a baseline material to a given application.

“Like a painter mixing colours to create the shade specific for their painting, we try to match the nano- materials to produce made-to-measure composite materials for end users,” adds Thanos.

“The challenge has been upscaling the benefits of nano-materials from the level of scientific observations to commercial products in a ‘pre-preg’ form that is usable and understandable to existing material users, without having to change the way they work.”

Established by researchers working together at the University of Patras, Adamant Composites maintained its main focus on the space sector, until meeting with representatives of the Alchemy company at a composites trade show in Paris, where the first commercial announcement of the technology was made.

“They told us about the problems they faced, and we said we’d see about using our technology to respond to their needs,” notes Thanos. “It was shortly after that meeting that ESA introduced its Technology Transfer Proof of Concept. This turned out to be the ideal framework for partnering together, considering that both of us are small firms focused on entirely different sectors.”

“The resulting Proof of Concept project led us to achieve two major milestones,” says Thanos. “First at the material level, we were able to demonstrate the required performance, with non-standard testing to show damaged material could still sustain the same load without breaking. Then secondly we worked together to shape this material into several different designs of prototype diving fins we could then evaluate in terms of products.

“Success at this level leaves us ready to take the product forward in the future, and given us techniques we can also apply to other sectors, including space.”

Having tougher fins means that they can be used in without hesitation in demanding uses such as spearfishing. Employing this space technology enables Alchemy to provide a game-changing product to underwater enthusiasts and professionals, while extending their portfolio with a strong and innovative presence.