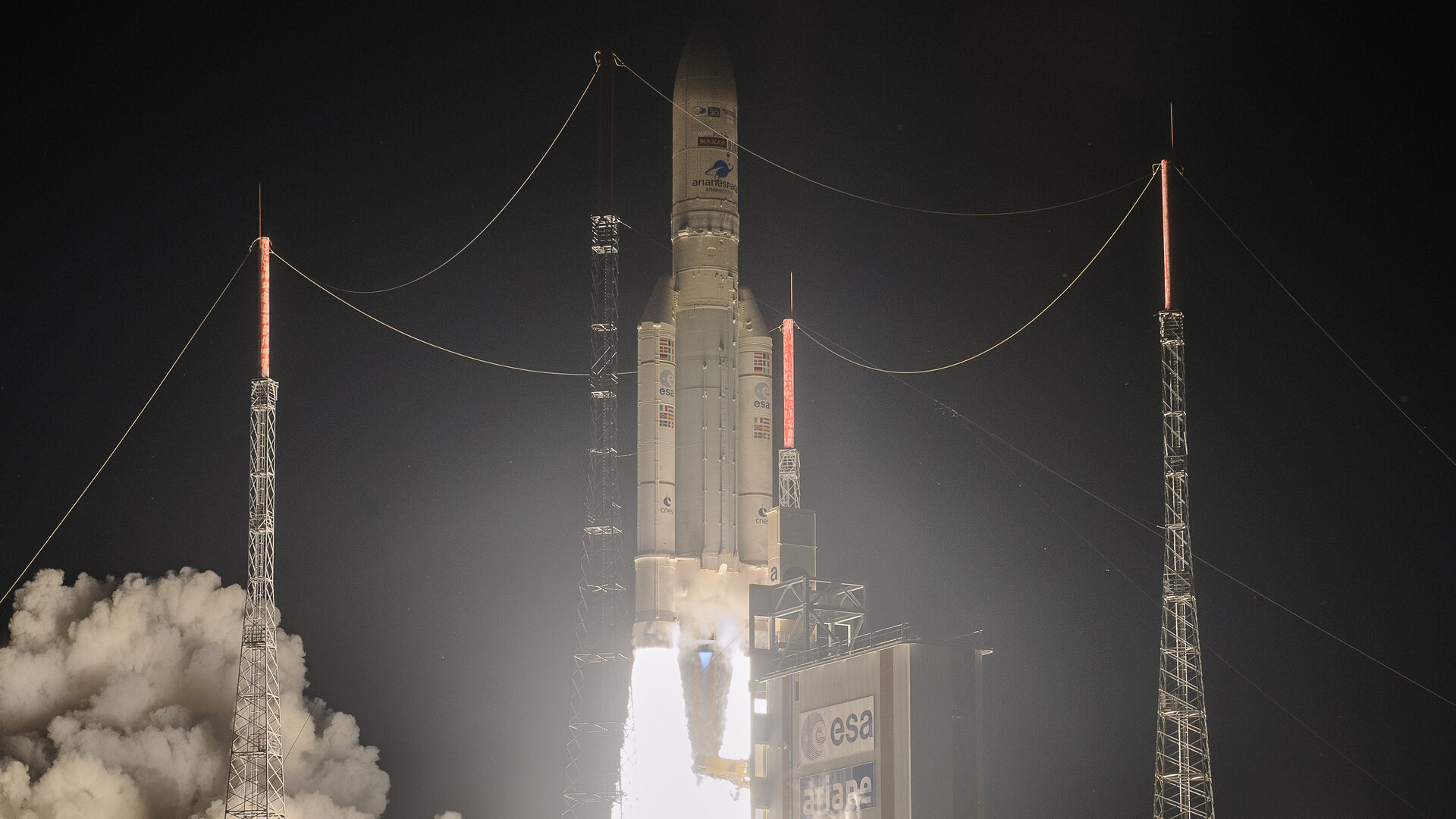 Europe’s Ariane 5 has delivered two telecom satellites Galaxy-30 and BSAT-4B, and the Mission Extension Vehicle (MEV-2), into their planned transfer orbits. There are also four notable updates to the launch vehicle.

Arianespace announced liftoff at 23:04 BST (00:04 CEST, 19:04 local time) this evening from Europe’s Spaceport in Kourou, French Guiana, for a mission lasting about 47 minutes.

Galaxy-30, with a launch mass of 3298 kg, was the first to be released after about 27 minutes. The 2875 kg MEV-2, also housed in the upper berth of the fairing, was released about seven minutes later.

Following a series of burns controlled by Ariane’s computer, the Sylda structure encasing the 3530 kg BSAT-4B was then jettisoned. BSAT-4B was released into its own transfer orbit about thirteen minutes after MEV-2.

Galaxy-30 is owned by Intelsat and will deliver high-performance broadcast distribution capabilities, including ultra-high definition and over-the-top streaming media, while also supporting broadband, mobility and enterprise network solutions. It has a design life of 15 years.

The MEV-2 is owned by Northrop Grumman and will be used for in-orbit satellite servicing.

BSAT-4B, owned and operated by Japan’s Broadcasting Satellite System Corporation, will provide ultra-high definition direct-to-home television services across the Japan archipelago. The satellite has a design life of at least 15 years.

The performance requested for this launch was about 10 468 kg. The satellites totalled about 9703 kg, with payload adapters and carrying structures making up the rest.

This is the first launch following the restart of operational activities at Europe’s Spaceport in French Guiana, after the suspension of launch campaigns that was imposed on 16 March 2020 due to COVID-19 measures.

Also on this flight, there are four new technical modifications to Ariane 5.

New onboard technology called Kassav is the first version of an autonomous tracking kit developed by CNES in partnership with ArianeGroup. Independently of the operations of the launch vehicle, Kassav uses dedicated telemetry to send real-time information on Ariane’s position and speed to the Flight Safety team at Europe’s Spaceport.

CNES funded the kit development and checks for safe use while ESA funded and oversaw the installation on the launch vehicle. Kassav will now be used on all Ariane 5 and Ariane 6 flights.

A further modification to Ariane 5’s fairing will minimise depressurisation at separation as this two-part nose cone is jettisoned away from the launch vehicle in space. Manufactured by RUAG Space Switzerland, the fairing protects the customer payloads from the acoustic, thermal and aerodynamic stresses during the ascent. New hardware ensures that venting ports around the base of the fairing remain fully open on the way to space, allowing the pressure to equalise within the fairing prior to opening and falling away from the rocket.

This alteration is part of the preparation for the launch of the NASA/ESA/CSA James Webb Space Telescope (JWST) set for October 2021. These changes mitigate concerns that residual air pressure in the folds of the JWST sunshield membranes could cause high stresses at the time of fairing separation, potentially damaging sensitive components.

The vehicle equipment bay (VEB), the ‘brain’ of the launch vehicle controlling the avionics, guidance system and other key components that interfaces with the upper stage, has been made 85 kg lighter on its central cone thanks to the use of new material and removal of metallic interfaces. This modification increases Ariane 5’s total payload capability to geostationary transfer orbit to 10 300 kg.

During the redesign of the cone, the membrane that separates the VEB and the upper stage was also made a few kilograms lighter using innovative manufacturing technologies. This membrane will continue to be used on all Ariane 5 flights and also incorporated in the upcoming Ariane 6.

Ariane 5 is operated by Arianespace at Europe’s Spaceport. It is able to carry payloads weighing more than 10 tonnes to geostationary transfer orbit and over 20 tonnes into low-Earth orbit. Its performance perfectly complements that of Europe’s Vega light-lift launch vehicle, and Soyuz.