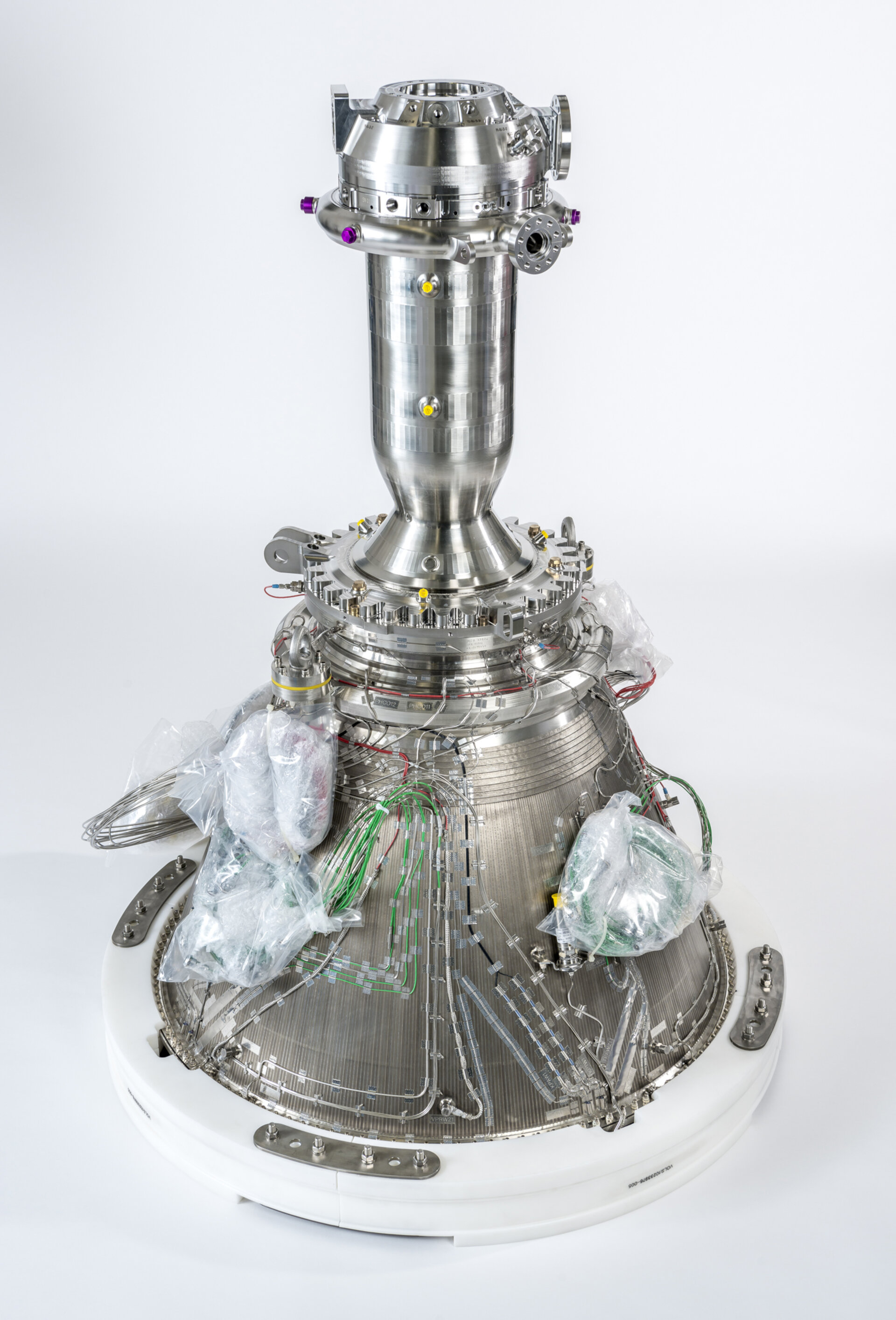 A full-scale demonstrator of the thrust chamber for an upper-stage rocket engine incorporating the newest propulsion technologies is being prepared for its first hot firing.

The Expander-cycle Technology Integrated Demonstrator, or ETID, has arrived at the DLR German Aerospace Center test facility in Lampoldshausen for tests. It will help to prove new technologies, materials and manufacturing techniques that offer higher performance at lower cost for Europe’s future launchers.

ETID is a precursor of the next generation of 10-tonne rocket engines. Some of the technologies could also be used on upgrades to the existing Vinci, which powers the upper stage of Ariane 6.

The Prometheus precursor of a 100-tonne class rocket engine intended for next-generation launch vehicles will also benefit from the knowledge gained during demonstration, for example on additively manufactured parts or low-cost combustion chamber materials.

Upper-stage engines operate in specific conditions such as vacuum and weightlessness that are difficult to reproduce on Earth, and involve significant development risks that have to be mitigated.

From April to the end of the year, ETID will be ignited up to 20 times with each firing lasting 120 s, in conditions similar to those in space with a near-vacuum provided by the test stand.

Led by ArianeGroup in Germany, GKN Aerospace in Sweden, Aerospace Propulsion Products in the Netherlands, Safran Aero Boosters in Belgium and Carinthian Tech Research in Austria have all provided hardware for the tests.

At least two versions of each piece of hardware have been built, resulting in at least three different test configurations to be hot-fired, proving different technologies and methods of manufacture such as additive manufacturing, laser ignition and cost-efficient materials. In addition, components will be tested to lay the foundations for a future ‘smart’ engine.

Through its Future Launchers Preparatory Programme, ESA aims to increase the future competitiveness of European launchers by creating ready-made technical solutions, which can be transferred for quick development projects with minimal cost, effort and risk.

“New demonstrators and evolutions of existing engines integrate new technologies, industrial processes and global trends to meet the competitive long-term challenges of the European space transportation sector. Hot-firing tests on such demonstrators are the best way we have to test propulsion technologies in representative conditions,” commented Kate Underhill, lead engineer.