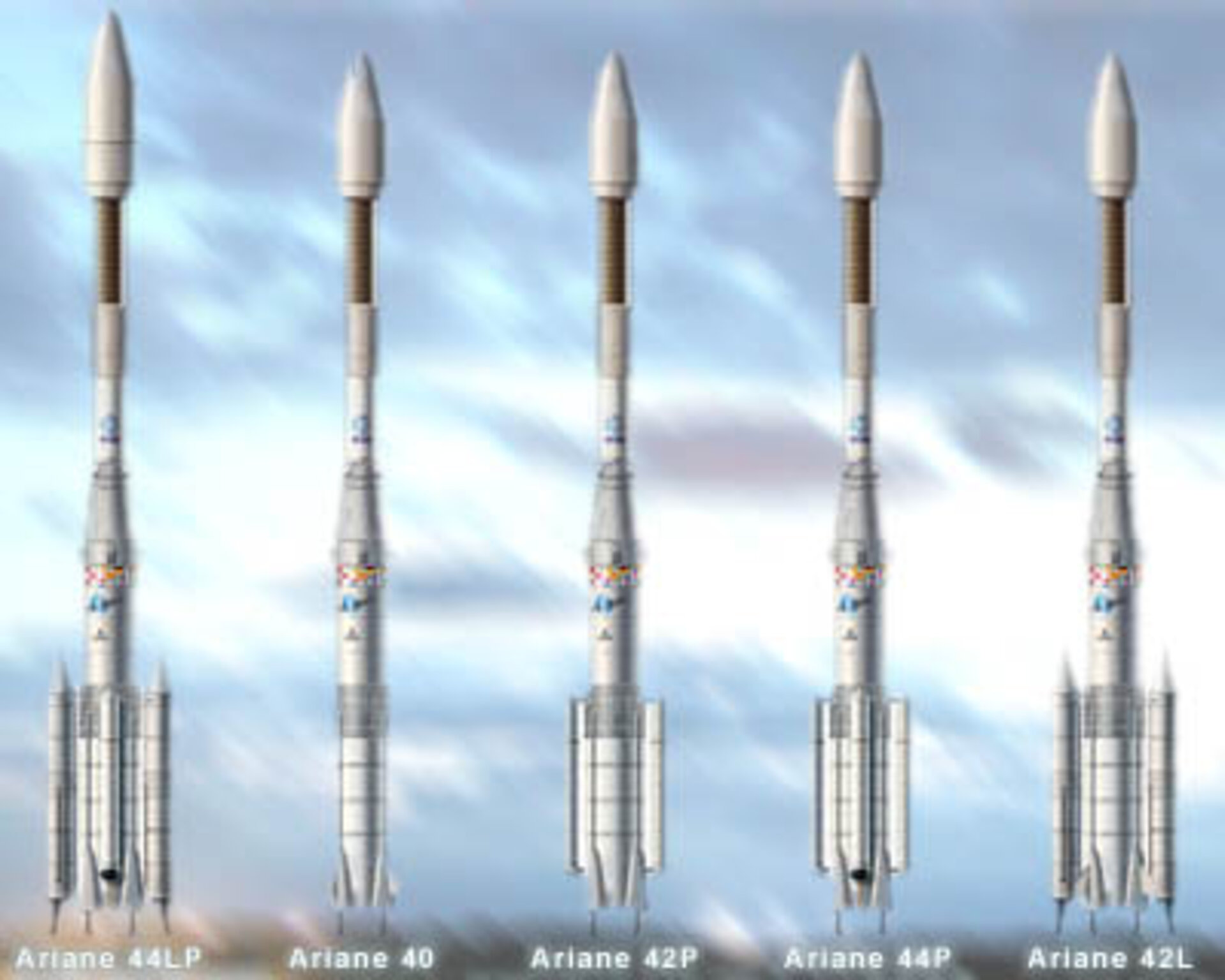 Ariane 4 - often referred to as the Ariane workhorse received its 'honourable discharge' in 2003 after 15 years of faithful service.

Ariane 4 is the last version of the generation of launchers that all used the same technology:

Ariane 4 differed from its predecessors in several ways. The first stage was upgraded to carry 210 tonnes of propellant as compared to 140 tonnes; larger solid strap-on boosters and new liquid strap-on boosters were added to increase thrust in the early flight phase; the vehicle equipment bay was reorganised; and a 4 m diameter fairing and a new dual launch system were provided to cope with larger and heavier spacecraft. This meant that Ariane 4 could be launched in six versions to carry spacecraft with payloads ranging from 2000 kg to 4900 kg into geostationary transfer orbit. This compared to a maximum payload of 2700 kg for an Ariane-3 launcher.

Ariane-4 development commenced in 1982 after a short but intense preparatory programme initiated in 1981. The programme suffered from two Ariane-3 failures due to ignition problems with the 3rd stage cryogenic engine. Absolute priority was given to resolving this to minimise launch manifest problems.

Ariane-4 development culminated in the successful Ariane-401 demonstration flight that took place on 15 June 1988, placing ESA's Meteosat P2 and the Panamsat 1 satcom into orbit. The first Ariane-4 operational flight took place on 11 December 1988 launching the Skynet 4B and the Astra 1A spacecraft.

There are many prerequisites for successful development of a launcher: a strong and lasting political will; availability of the necessary financial resources; experienced and motivated government and industrial teams and appropriate structures; dynamic commercialisation; and, taking the right decisions at the right time. This last point may seem trivial and perhaps even naive, but it was one of the keys to Ariane's success. Throughout the programme proposals were made - and decisions taken - at the right time.

Some facts and figures

In 1997 Arianespace ordered what turned out to be the last batch of 20 Ariane-4 launchers. Then in 2000 the decision was made to discontinue Ariane-4 production after this batch. Why this decision?

When Ariane 4 became operational in 1988 the Ariane 2 and 3 versions were discontinued rapidly, after a reasonable overlap with Ariane 4 for the sake of commercial continuity. The reasons being:

Exactly the same situation arose in 2000 with Ariane 4 and 5, and this led to the decision to discontinue Ariane 4 after the 116th launch. The mass of communication satellites had continued to increase while the market for spacecraft in the 2000-2500 kg mass range dwindled, forcing Arianespace to launch more and more communication satellites as single payloads, which is economically prohibitive.

In addition, spacecraft appeared on the market - and are expected to proliferate - with masses well above the maximum Ariane-4 payload (approximately 4800 kg into geostationary transfer orbit) and these were taking a larger and larger share of the market.

The Ariane-4 launcher has done remarkably well in terms of performance, reliability, operational flexibility, commercialisation and industrial benefits. From the strategic point of view, it has been the mainstay of Europe’s autonomous access to space.

Thanks to Ariane 4, Arianespace, together with the European launcher industry, is recognised as one of the best launch service providers, if not the best, in the world. More than 50% of the communication and other application spacecraft accessible to Ariane worldwide have been launched by this vehicle.

The future of Europe's launch capability now lies with the Ariane-5 launcher and with the new Vega launcher, specially designed to put smaller satellites into orbit.