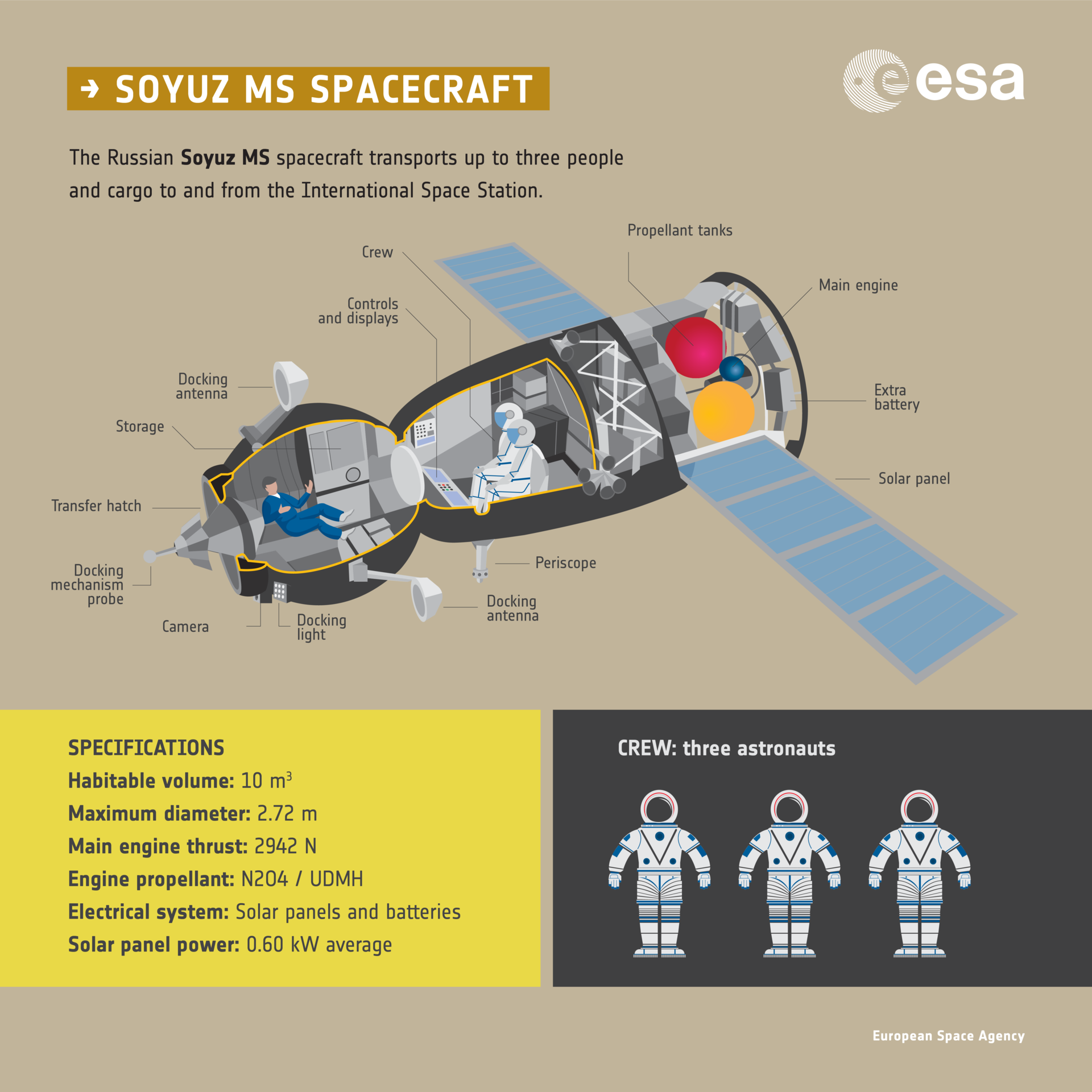 Soyuz means "union" in Russian. The Soyuz programme is the longest operational human spacecraft programme in the history of space exploration. The first crewed flight into space was on 23 April 1967. Although they were conceived by the Soviet Union at the start of the sixties, the Soyuz spacecraft are still used today, but with important modifications. They have transported Russian crews to the Soviet stations Salyut and Mir. Currently the Soyuz are the only spacecraft available to transport crews to and from the International Space Station.

The Soyuz spacecraft weigh 7 tonnes; they measure 7.2 m in length and 2.7 m in diameter. With the solar panels open (they remain closed during launch) the Soyuz measures 10.6 m across. A Soyuz vehicle can carry up to three astronauts.

A Soyuz is made up of three modules: the service, the orbital and the reentry modules. The orbital module (the “tip” of the spacecraft) carries the equipment necessary to dock with the International Space Station. The service module (the lower part) transports, among other things, telecommunications and altitude control equipment and the coupling of the solar panels. The descent module (in the middle) is where the astronauts travel and it is the only section that reenters the atmosphere – the orbital module breaks up during reentry.

The journey of the Soyuz to the International Space Station can last six hours or two days depending on the mission profile. The return journey, in contrast, lasts only 3 hours. Normally, the decent module touches down on Earth at a velocity of less than 2 m/s.

The habitable space in the descent module is just 4 cubic metres. The decent module weighs 2.9 tonnes.

The previous version of the Soyuz was the TMA, which replaced the TM. The “A” corresponds to “anthropometric”, because in this model height limitations for the crew were eliminated. The first flight of a TMA (the TMA-1) took place on 30 October 2002. Upon its return to Earth, in May 2003, a problem forced it to reenter in ballistic mode and land 460 km away from the planned landing site. The astronauts were not hurt, thanks also to the “soft landing” system that reduces the impact of landing from 12 g (as it was in the Soyuz TM series) to 5 g.

The current version of the Soyuz is the MS spacecraft. The ‘MS’ denotes the most recent update to the fourth generation of this long-serving spacecraft. It stands for Modified Systems, with many smaller technological upgrades to make the spacecraft lighter and more modern. For example halogen lights have been replaced with LEDs and newer and larger solar panels to increase power generation.