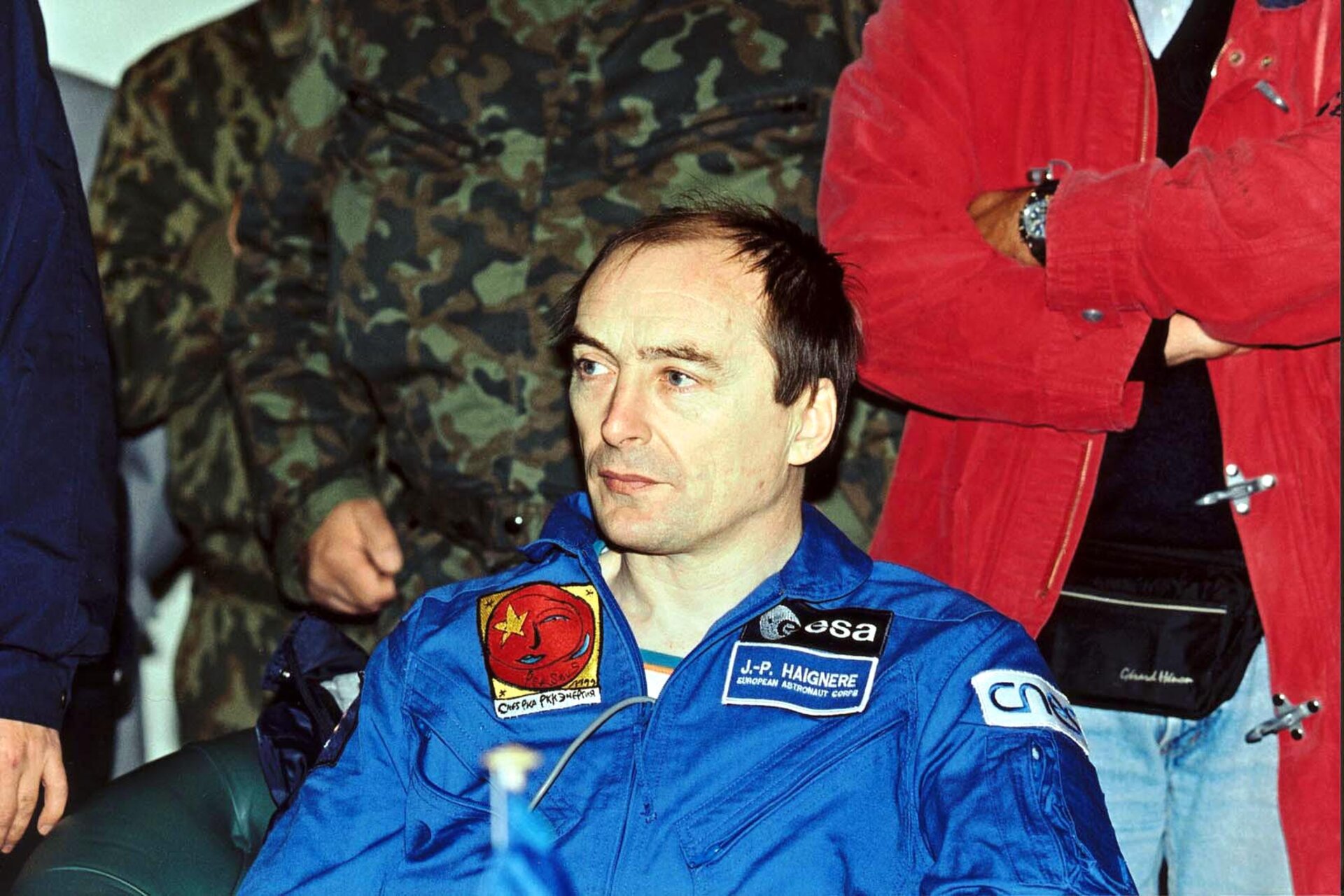 In 1971, he graduated as an engineer from the French Air Force Academy at Salon-de-Provence and qualified as a fighter pilot at Tours in 1973. In 1981 he graduated from the Empire Test Pilots School (ETPS) at Boscombe Down, England, where he won the "Hawker Hunter" and "Patuxent shield" awards. He studied astrophysics at the University of Orsay, France, from 1986 to 1987.

Jean-Pierre Haigneré is "corresponding member" of the Académie de l'Air et de l'Espace and Chairman of the space committee at the Aéroclub de France.

From 1973 until 1980, Jean-Pierre Haigneré was a fighter pilot, then Squadron Leader on Mirage 5 and Mirage IIIE aircraft. He was posted to the Bretigny-sur-Orge Flight Test Centre in 1981 as the project test pilot for the Mirage 2000N aircraft and was appointed Chief Test Pilot in 1983.

He has logged 5500 hours flying on 105 different types of aircraft, including 1800 hours of test flight time. He holds a commission as Général in the French Air Force. He also holds current test pilot and air transport professional licenses, Airbus A300 and A320 qualifications, helicopter private license, mountain and seaplane rating.

Jean-Pierre Haigneré was selected as an astronaut by the French National Space Agency (CNES) in September 1985. From 1986 to 1989 he headed the Manned Flight Division of the Hermes and Manned Flight Directorate, and took part in preliminary studies for the Hermes spaceplane. He also developed and fine-tuned the Zero G Caravelle programme (parabolic flights), subsequently becoming technical and operational officer-in-charge.

From December 1990 Jean-Pierre Haigneré underwent training at Star City, near Moscow, as a back-up crewmember for the French-Russian Antares spaceflight. He was selected as prime crew for the Altaïr mission in 1992, undergoing seven month training for a 21-day mission on board the Mir space station, which successfully took place from 1 to 22 July 1993.

In 1995 and 1996, he was involved at the Kaliningrad Russian Space Control Centre in the operational aspects of the ESA Euromir 95 and French Cassiopée manned spaceflights. He then returned to France where he was in charge, as test pilot, of flight assessment of the new Airbus Zero-G aircraft.

From 1997 till end of June 1998 Jean-Pierre Haigneré trained at Star City for the 6th French-Russian "Pegase" spaceflight.

On 20 February 1999 the Soyuz TM29 was launched with Haigneré and his crew to the MIR station for the Perseus mission. He performed a six-months mission with Viktor Afanasyev and Sergej Avdeyev. They left MIR uninhabited in a stand-by mode and landed in Kazakhstan on 28 August 1999.

In November 1999 he was assigned Head of the Astronaut Division at the European Astronaut Centre (EAC), Cologne.

On 20 February 1999, Haignere was the first non-Russian to be launched as Soyuz on-board engineer to the Russian MIR Space Station on a mission called Perseus. The experimental programme comprised the continuation of former French experiments from Cassiopée and Pegase missions, and new experiments from France, Germany and ESA in the field of life science, physics and biology.

During his flight, Haigneré also carried out a spacewalk (EVA) to perform biological and comet dust experiments outside MIR. Haigneré also worked as on-board engineer for the MIR Space Station. Perseus was a long-duration flight of nearly 189 days. The landing took place on 28 August 1999. It is the longest flight ever performed by a non-Russian astronaut.

Jean-Pierre completed a total of 210 days in orbit.

As senior advisor to the ESA Director of Launchers, Jean-Pierre Haigneré is currently in charge of studying all aspects for a Soyuz human spaceflight programme from Europe's spaceport in French Guiana.