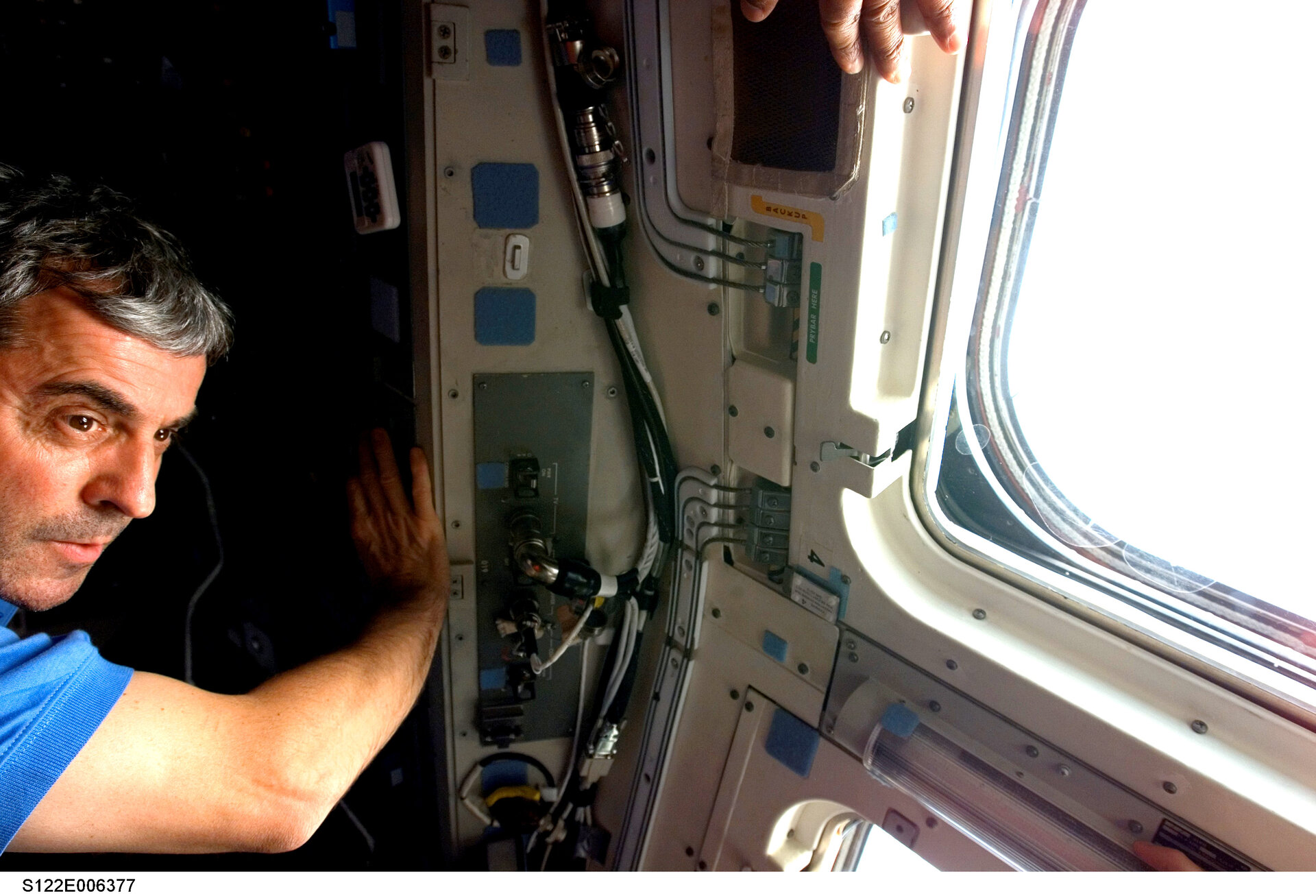 Born 28 April 1957, in Biarritz, France, Léopold Eyharts is married and has one child. His hobbies include jogging, mountain biking, tennis, reading and working with computers.

Léopold graduated as an engineer from the French Air Force Academy of Salon-de-Provence in 1979. He qualified as a fighter pilot in Tours, France in 1980 and graduated from the EPNER French test pilot school in Istres in 1988.

Léopold has been decorated as Officer of the French Légion d’Honneur and Chevalier de l’Ordre National du Mérite. He was awarded the Médaille d’Outre-Mer, the Silver Medal of the Défense Nationale and the Russian medals for Friendship and Courage.

Léopold joined the French Air Force Academy of Salon-de-Provence and graduated as an aeronautical engineer in 1979. In 1980 he became a fighter pilot assigned to an operational Jaguar A squadron in Istres Air Force Base in France. In 1985, he became a flight commander at Saint-Dizier Air Force base.

In 1988 he was assigned to the Brétigny-sur-Orge Flight Test Centre near Paris, France, and promoted to Chief Test Pilot in 1990.

Léopold has logged 3800 hours flying time on over 50 types of aircraft and 21 parachute jumps including one ejection. He holds a commission as General in the French Air Force.

In 1990, Léopold was selected as an astronaut by France’s CNES space agency and assigned to the Hermes spacecraft programme managed in Toulouse, France. He was also one of the test pilots and engineer in charge of CNES’ parabolic flight programme with the Caravelle aircraft and carried out Airbus A300 qualification flights.

Léopold had two training sessions at the Yuri Gagarin Cosmonaut Training Centre near Moscow, Russia, in 1991 and 1993. He took part in an evaluation of the Buran Space Shuttle training in Moscow, where he flew in the Tupulev 154 Buran simulator.

Léopold was part of the selection process for new ESA astronauts in 1992.

In July 1994, Léopold was assigned as backup crew for the French–Russian Cassiopée spaceflight, which took place in August 1996. In December 1996 he was selected for CNES’ mission Pegase, which took place from 29 January to 19 February 1998.

In August 1998, Léopold joined ESA’s Astronaut Corps based at the European Astronaut Centre in Cologne, Germany. He was assigned to train at NASA’s Johnson Space Center in Houston, USA, where he became part of the 1998 Mission Specialist Class.

Léopold received technical assignments from NASA’s Astronaut Office at the Johnson Space Center. He worked in the International Space Station Operations Branch as a section chief for Space Station systems, software and on board information technology.

Léopold was assigned as backup of astronaut Thomas Reiter for ESA's first long-duration mission to the International Space Station. From October 2004 Léopold trained with American and Russian backup crewmembers at the Gagarin Cosmonaut Training Centre near Moscow and at NASA’s Johnson Space Center.

Léopold’s first spaceflight was to Russia’s Mir space station from 29 January to 19 February 1998. During this French–Russian ‘Pegase’ mission, he ran experiments in medical research, neuroscience, biology, fluid physics and technology.

Léopold’s second spaceflight was an almost two-month mission to the International Space Station to deliver Europe’s Columbus laboratory. He flew to the Station on Space Shuttle Atlantis on STS-122 with ESA astronaut Hans Schlegel. They were launched on 7 February 2008. Léopold returned to Earth with Space Shuttle STS-123 on 27 March.

One of Léopold’s tasks as a member of Expedition 16 was to support the docking of the European Columbus space laboratory as well as to activate the module and its scientific racks. Léopold also contributed to international scientific experiments and maintained Station equipment.

When STS-123 arrived at the International Space Station on 13 March 2008, Léopold changed crew again. As a qualified mission specialist in robotics he then contributed to the STS-123 assembly mission as operator of the Station’s robotic arm. Working with other astronauts, Léopold installed Japan’s Experiment Logistics Module and assembled and activated Canada’s Dextre robotic arm. Léopold was the second ESA astronaut to become a resident Station crewmember.