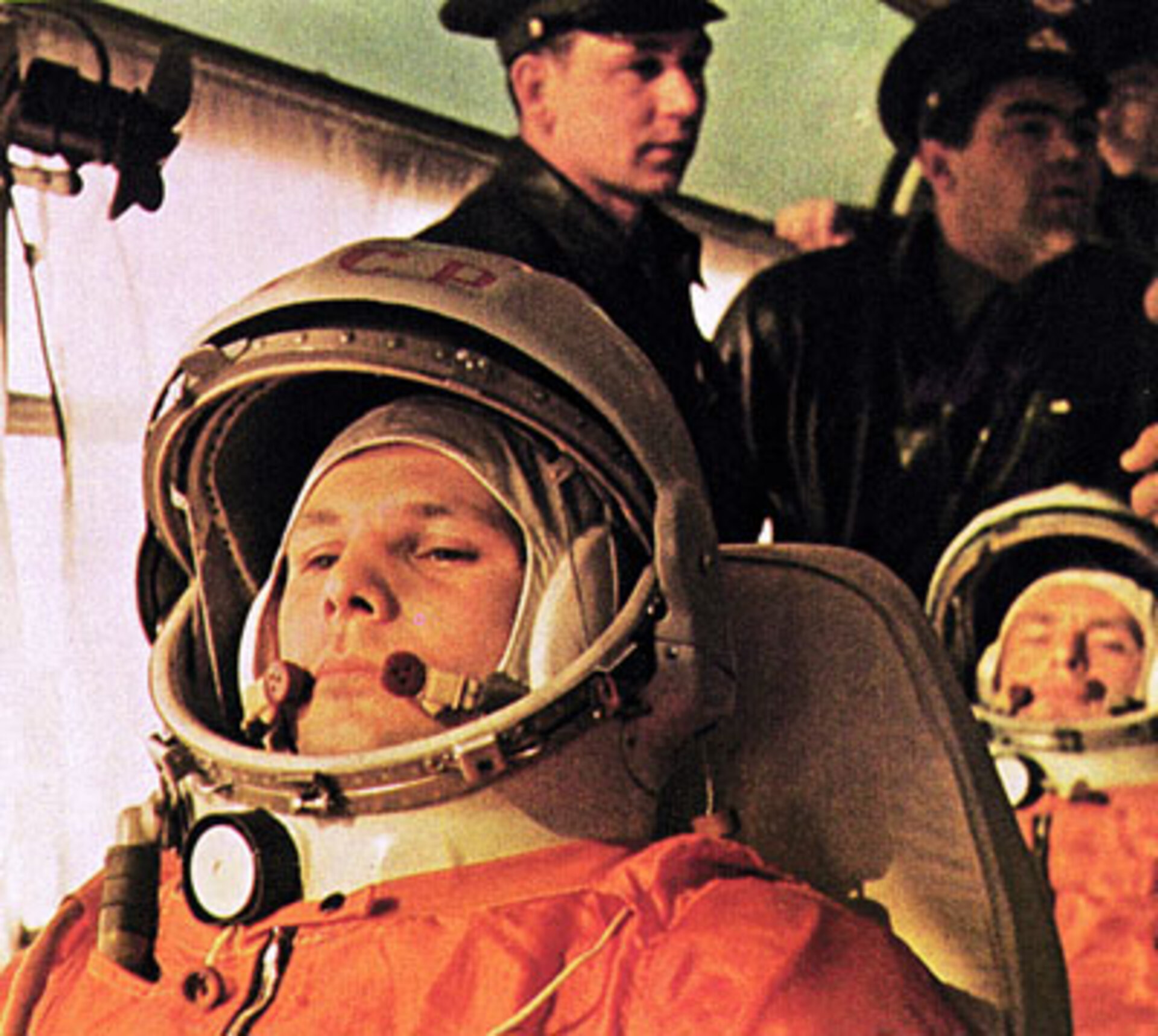 Like every other living creature we know of, humans evolved at the bottom of a gravity well. We take the Earth's tug for granted, and so do our bodies. So it's not surprising that our bodies behave oddly in orbit. What is surprising is that humans turn out to adapt remarkably well to zero-g (more precisely, microgravity). After all, back in 1961, Soviet scientists were genuinely worried that any prolonged period of weightless might even be fatal - which is why they limited Yuri Gagarin's first space flight to just 108 minutes and a single orbit.

Since then, scientists around the world have had the benefit of years of data on the effects of long-term space living. (The record for a long-duration mission is still held by Russian cosmonaut Valeri Polyakov, who completed a 438-day tour of duty aboard the Mir space station in 1995.) The crews of the ISS are already making full use of that experience, and will certainly add to it.

Weightlessness itself is the most important and the most obvious influence on life in space. Most astronauts find their freedom from gravity exhilarating, especially as they adapt to their new environment. But weightlessness enormously complicates the business of daily life, from eating to sleeping. And space adaptation involves some very complex changes in the human body, both short-term and long-term. These changes can cause health problems both in space and on return to Earth.

There are other factors, too. Outside the protective shield of the Earth's atmosphere, astronauts have to contend with high radiation levels. Mostly, these have minor and long-term effects: a slight increase in the risk of cancer in later life, for example. But during occasional solar flares, the sleet of radiation from the Sun can be immediately life-threatening.

Human psychology plays an important part in the story, too. Life in space also means living with a distinct lack of space. The ISS is vastly larger than any previous space structure, but even so it is no mansion. Astronauts can enjoy the finest views imaginable, with the whole planet stretched out before them amid the starry immensity of the universe. But their living quarters are pretty cramped, and they must share them with their fellow crew members for months at a time.

Still, there is no shortage of applicants for astronaut positions. And virtually everyone who has had the chance to live in space is keen to return. Besides, as our knowledge increases, and space medicine develops throughout the 21st century, the men and women in orbit - and hopefully beyond - should have a more comfortable time in future.

Microgravity affects just about everything in the human body, and usually for the worst. Fortunately, the effects are seldom more than temporarily disabling: humans are very good at adapting. And when astronauts return to Earth, they normally re-adapt very quickly to the customary, gravity-bound environment.

We take our ability to stand upright just as much for granted as we do the force of gravity that holds us to the Earth. In fact, the human sense of balance depends on an extremely sophisticated sensor system that provides a constant stream of information to the brain. The key motion sensors are the subtle organs of the vestibulary system inside the inner ear. These function as super-sensitive accelerometers feeding the brain with a steady stream of signals that indicate motion and direction. There are also pressure receptors in the skin and in muscles and joints. Our senses of sight and hearing complete the data stream. Without having to think about it, we usually know everything we need about our body's posture and state of balance.

In the absence of gravity, signals from the vestibulary system and the pressure receptors are wildly misleading. The effect usually leads to immediate disorientation: many astronauts suddenly feel themselves upside-down, for example, or even have difficulty in sensing the location of their own arms and legs.

This disorientation is the main cause of the so-called Space Adaptation Syndrome, which one astronaut wryly described as "a fancy term for throwing up". Half or more of all space travellers suffer from space sickness, which brings with it headaches and poor concentration as well as nausea and vomiting. Usually, though, the problems disappear within a few days as astronauts adapt.

It is their brains, not their stomachs, that do most of the adapting. The confusing signals from the inner ear are largely ignored and vision becomes the prime source of "balance" information. In space, "down" is where your feet happen to be.

When they return to Earth, astronauts have to re-adapt just as painfully. Back at the bottom of the gravity well, most have difficulty maintaining balance - and if they close their eyes, they are very likely to fall over. Because of the effects of weightlessness on bones and muscles, they may have difficulty standing at all. But disorientation itself usually only lasts a few days, and there seem to be no long-term effects.

There is one re-adaptation that can take somewhat longer to accomplish, although the consequences are more likely to be amusing than crippling. Several long-duration Russian cosmonauts have reported that months after their flight, they still occasionally let go of a cup or some other object in mid-air - and are quite disconcerted when it crashes to the floor.

Almost two-thirds of the average body weight is made up of water, in the form of intercellular fluid, blood plasma and the interstitial fluid between blood vessels and surrounding tissue. On Earth, all this liquid tends to settle downward in the body. Blood pressure at our feet, for example, is about 100mm of mercury higher than blood pressure in our chests. And the need to pump blood against the force of gravity requires the muscles of a big, powerful heart.

In space, there is nothing to pull body fluids down: there is no "down" to pull them to. The first effects are almost immediate. Without the restraint of gravity, fluids migrate from the legs to the head. Inside a day, legs shrink by up to a litre in volume and faces puff up correspondingly. The extra fluid in the head also leads to blocked sinuses and noses - the "space sniffles" that astronauts generally have to live with throughout their mission.

Other effects are more serious. Blood plasma drops by about 20% and the red blood cell count falls similarly: returning astronauts usually suffer from a temporary anaemia. Without gravity to contend with, the heart has to do far less pumping work. Heartbeat slows down. Since the body no longer needs to maintain the powerful heart muscles needed on Earth, heart tissue begins to shrink.

Exercise is not enough to reverse the process, but it helps to minimise it and the exertion also provides some relief from the "sniffles". Whenever possible, astronauts spend several hours a day on a treadmill or similar apparatus: the more exercise they can do in space, the less time it will take to recover on their return.

Bones are the scaffolding that holds the body against gravity. Our powerful skeletal muscles support that scaffolding - and of course move it around as required. Without gravity, bone and muscle alike lost their prime function. After even a short time in orbit, some strange things begin to happen.

The first seems like good news: without the compressive force of gravity, your spinal column expands and you grow taller, usually by between 5 and 8 cm. Unfortunately, the extra height can bring complications, which may include backache and nerve problems. More worrying than height gain, though, is the loss of bone and muscle tissue that becomes apparent from the first few days of a space mission.

Bone is a living, dynamic tissue. In normal life, new bone cells are constantly being made while worn bone is destroyed and its materials recycled. Bone regeneration is governed by a complex system, regulated by hormones and vitamins as well as physical stress on various parts of the skeleton. In microgravity, the body has no need to maintain its skeletal structure to Earth-bound standards. So bone tissue is absorbed and not replaced: astronauts can lose up to 1% of their bone mass each month. The missing bone shows up as high calcium levels elsewhere in the body, which itself can lead to health problems - kidney stones, for example.

Microgravity bone loss stops soon after astronauts return to Earth, but so far, no one is sure whether the lost bone fully regenerates. The life science experiments planned for the ISS should help scientists learn much more precisely how bone loss comes about, and perhaps how to cure it. Since the problem is very similar to osteoporosis, a bone-wasting disease especially common among elderly women on Earth, astronauts will not be the only people to benefit from the research.

Exercise seems to have little effect on bone loss, but it does reduce muscle shrinkage and generally improves an astronaut's sense of well-being. It may also be essential to a mission: astronauts can move around inside the ISS with very little effort, but spacewalks - or even installing heavy equipment within the station - involve heavy work.

Most astronauts, at least once they get over any space sickness, report an initial exhilaration at their freedom from weight. They are all disciplined, highly trained people, too, who share a sense of being part of an elite team with important work ahead of them. So it is not surprising that psychological problems are unusual on short-duration space missions.

Sooner or later, though, despite the marvellous views and the sense of mission, astronauts do feel the pressure of confinement in what amounts to a few small rooms. One Russian cosmonaut wryly remarked, "All the conditions necessary for murder are met if you shut two men in a cabin measuring 5 metres by 6 and leave them together for two months."

Fortunately, no astronaut has ever come nearer murder than a little ill-temper. But Russian psychologists - with almost 90,000 flying hours aboard the old Mir station to provide their data - have learned a good deal about the psychology of long-term space flight. Generally, they observed their cosmonauts go through three distinct phases. During the first, which usually lasted about two months, people were busy adapting, usually successfully, to their new environment. In the second phase, their were clear signs of fatigue and low motivation. And in the final phase, cosmonauts could become hypersensitive, nervous and irritable - a group of symptoms the Russians called "asthenia".

Other than a return to Earth, there seems to be no instant cure. But an easier workload, coupled with frequent opportunities for private communication with families back home, are important morale boosters. ISS operations managers have learned a great deal from the Russian experience, which is one reason why duty tours aboard the station will normally be limited to six months.