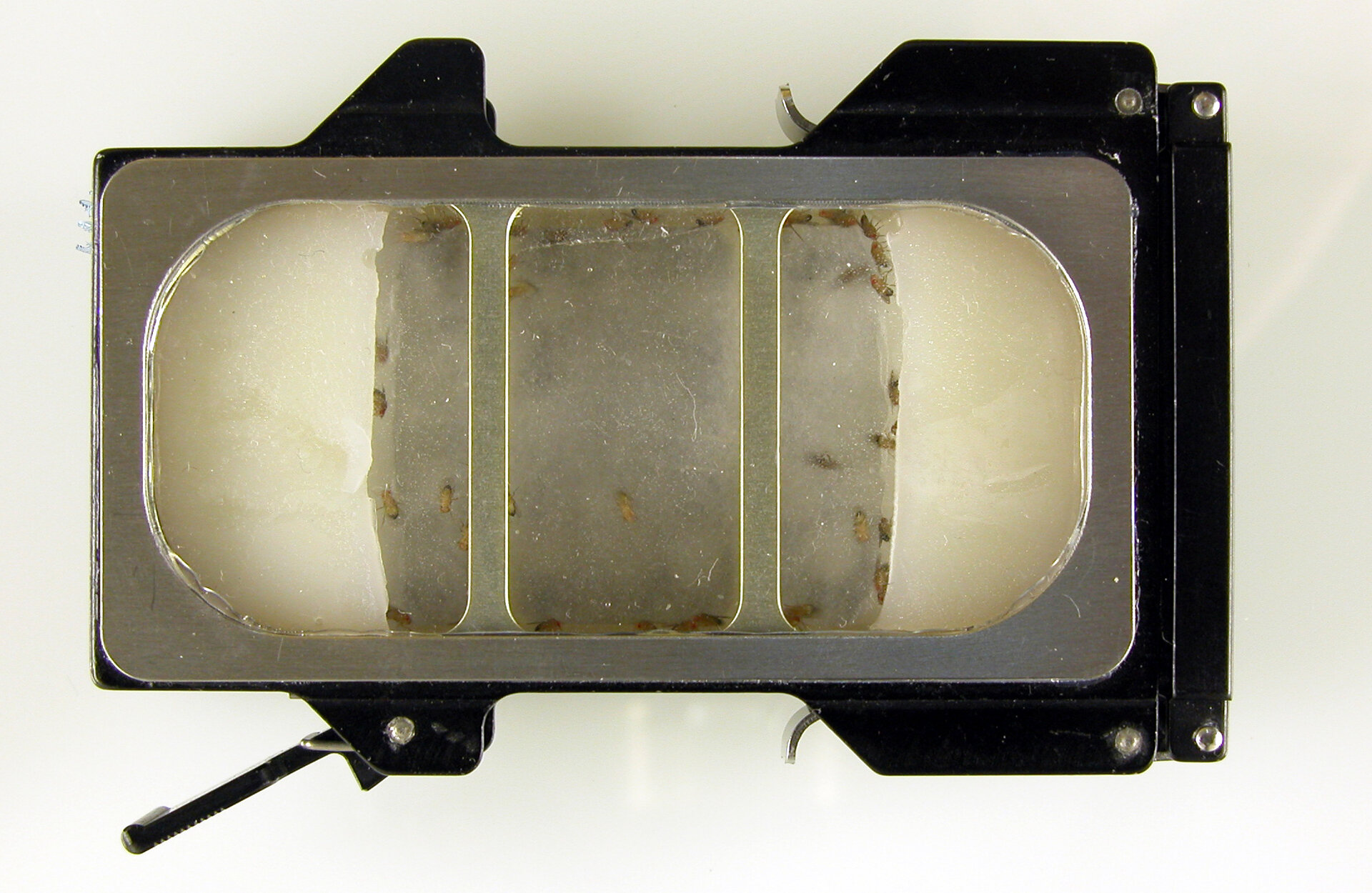 AGEING
The AGEING experiment will gather information to understand the basics of the ageing process. It aims to study the increased activity of fruit flies during weightlessness. The experiment follows on from previous research, which linked accelerated ageing of the fruit fly to increased activity under weightless conditions. This is a phenomenon found to be more noticeable in younger, male fruit flies.

Three different strains of fruit fly will be studied: A long-living strain, a short-living strain, and a strain that shows an increased response to gravity on Earth. All flies will be recently hatched except for one two-week-old population of one strain to confirm the increased activity exhibited by the younger species members.

GENE
The GENE experiment studies the effect of the space environment on the gene expression of fruit-fly embryos. Every cell in an organism has the same DNA molecule, which contains all the genes; but not every gene gets 'activated', or expresses itself, in every cell. During the development of the embryo, the cells begin to become something else - they became skin cells, or heart cells, or another kind of other cell, because the genes expressed in each of them are different. The GENE experiment will help to understand how this essential, delicate process takes place.

The post-flight analysis of the data collected will be looking for increases, decreases, and absences of changes of gene-expression levels when compared to similar ground experiments. Fruit flies are chosen for the experiment --as in AGEING-- because we understand more about the genetics of the fruit fly than any other higher organism. Also, these organisms are small, require little storage space or maintenance, and can be grown in numbers large enough to support meaningful statistical analysis. Principal Investigators: R. Marco y F. J. Medina (Spain).

ROOT
The ROOT experiment aims at studying the effects of the space environment on the structure and function of root cells of plants. The particular type of plant used for this experimentation is a member of the mustard family, Arabidopsis thaliana. This is a model organism in plant biology, the first plant with a completely sequenced genome or genetic map. The specific cells studied are those responsible for new cell production.

After returning to Earth, experts will process the roots for microscopic observation and compare them with similar samples obtained from ground-based experiments, which have taken place at the same time as the experiments in space. Principal Investigators: R. Marco y F. J. Medina (Spain).

MESSAGE
MESSAGE stands for Microbial Experiments in the Space Station About Gene Expression. The main objective of this program is to study the effects of space conditions such as weightlessness and cosmic radiation on metabolic processes in cultivated bacteria. Not all bacteria are harmful; on the contrary, many of them play an essential role in human physiology. We should therefore not overlook microbial life, if we want to understand how space affects organisms. Besides, research projects studying close ecosystems in space, such as vegetables fed with organic compost coming from other organisms in the ecosystem, rely completely on bacteria.

The MESSAGE experiments will analyse many different aspects of bacterial activity. The effects of space conditions on bacteria will be studied on four domains: the bacterial cell physiology, the bacterial motility, the genetic stability and rearrangements in bacteria, and the gene expression with special attention to genes involved in the response to stress.

The MESSAGE experiment is an improved reflight of an ESA experiment performed by the Belgian astronaut Frank De Winne on board the ISS during the Odissea mission in November 2002. Principal Investigator: M. Mergeay (Belgium).

WINOGRAD
Like MESSAGE, this experiment studies how space conditions affect bacterial life. The goal of WINOGRAD is to grow a type of bacterial colonies, namely 'Winogradski columns', in a weightless environment, and compare them with those that form spontaneously on Earth. A Winogradski column is a colony of different types of bacteria in which the waste products of one bacterium serve as the nutrients of the other. These systems are found in ordinary ponds or in lake water and need no other input than light for photosynthesis.

The study of bacterial ecosystems could be very important for future long-duration spaceflight, since these micro organisms could help to dispose waste or to recycle air and water, for example.

The bacteria for the WINOGRAD experiment reached the ISS last August 31, carried by an unmanned Russian Progress capsule. On return, experts will analyse these samples to determine where certain bacteria were located during flight and thereby determine the effect of weightlessness on the formation of Winogradski columns. The experiment is led by British students R. Dhir, D. Smillie, and T. Banergee.

NEUROCOG
This is a neuroscience experiment. It investigates the role that the sensory information of sight, balance, motion, and position play in human spatial perception. It also measures the precision of the perceptual processes of the brain and tests the effect of gravity on spatial perception and spatial memory. The post-flight analysis will include a comparison of results obtained with similar ground experiments. Principal Investigator: G. Cheron (Belgium).

CARDIOCOG
The CARDIOCCOG experiment studies the consequences of weightlessness on the cardiovascular system, the respiratory system, as well as stress and cognitive and physiological reactions of an astronaut during their space mission. During short duration flights, the body adapts itself to the consequences of weightlessness. For example, on Earth, the heart pumps blood 'uphill' against gravity. However, during weightlessness, there is no 'up' or 'down'. When an astronaut returns to Earth, their brain is left short of blood until the body has adapted itself completely to gravity.

If we can better understand this adaptive process, we could provide astronauts with the means to help smooth the transition from weightlessness to gravity. Principal Investigators: A. Aubert (Belgium) M. Paiva (Belgium).

SYMPATHO
This experiment will study activity of the sympathetic nervous system during weightlessness. The sympathetic system is that part of the nervous system that accelerates the heart rate, constricts blood vessels, and raises blood pressure. Experts will take blood samples from the crew before the flight and analyse them. Shortly after arriving in space and just before the end of the mission, further samples will be taken and stored in a freezer for return to Earth, at which point more samples will be taken and post-flight analyses will begin. This experiment is related to the BMI and RHYTHM experiments. Principal Investigator: N. Christensen (Denmark).

BMI (Blood Pressure Measurement Instrument)
The goal of the BMI experiment is to investigate the modifications in blood-pressure rhythms under weightless conditions over a period of 24 hours, using a computer-controlled blood-pressure recorder specially developed for round-the-clock monitoring. Astronauts will be the test subjects. Blood pressure readings will be taken pre-flight (40 days and 30 days before launch), in-flight (beginning and end of flight) and post-flight (four days and ten days after return).

Experts will also compare these results to the data obtained during the Italian Marco Polo mission, which took place in 2002 and where the test subject was the ESA astronaut Roberto Vittori. Principal Investigator: C. Gharib (France).

SSAS (Solid Sorbent Air Sampler)
The ISS is an enclosed environment. Scientists need to constantly monitor the composition of the atmosphere inside it to prevent the dangerous build-up of gases or organic compounds. The purpose of the Solid Sorbent Air Sampler (SSAS) experiment is to collect archival air samples that scientists will later analyse on the ground (post-flight).

The SSAS consists of eight tubes, each of them containing a dual sorbent material. Seven of the tubes absorb volatile organic compounds from the air on the ISS over a 24-hour period on consecutive days, while one acts as a control for the experiment.

The data generated by this experiment will help scientists design more effective ways of circulating and recycling air inside the ISS and in similar enclosed locations on Earth, such as submarines. Coordinator: F. de Jong, ESA.

RHYTHM
The aim of the experiment is to evaluate the change in cardiovascular control and adaptation mechanisms in space through analysing variations in heart rate, blood pressure, and respiration. The hypothesis of this study is that cardiovascular control and adaptation mechanisms undergo significant but reversible changes due to long-term space flights. These changes will also influence post-flight cardiovascular function. By comparing electrocardiograms, blood-pressure variabilities and respiration data pre-, in-, and post-flight, experts will be able to confirm or reject these hypotheses. Principal Investigator: A. Aubert (Belgium).

Carbon dioxide survey
Constant monitoring of environmental factors such as CO2 is of critical importance in the enclosed setting of the ISS. The purpose of this operational activity is to monitor the level of CO2 in the ISS sleeping quarters during times of potential CO2 accumulation, for example, during sleep. It is known that ISS crewmembers have experienced headaches after sleep. This could be due to a build up of CO2. Principal Investigator: F. de Jong (ESA).