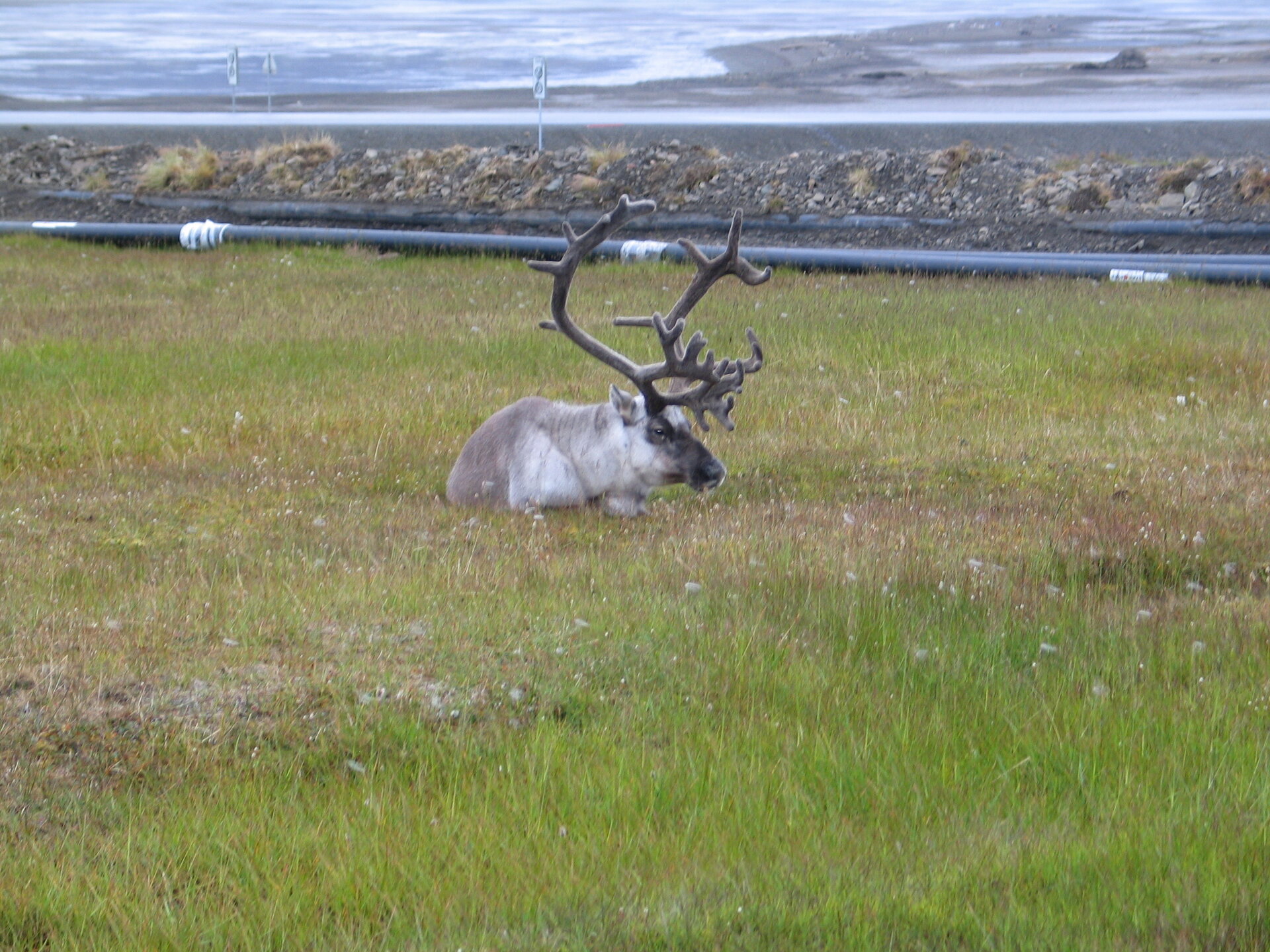 Last night after packing up all the gear, we encountered a reindeer that had wandered down into the city. It was quite amazing with huge impressive antlers and it let Ashley & me get really close to it to take pictures – and videos. It was just laying peacefully chewing grass.

Later Liane Benning (University of Leeds, UK) and I went down to have a beer and check out the local nightlife at the (only) discotheque of the town, however, a discotheque filled with geologists doesn’t really work ;-)

This morning we got up and started loading all the gear onto trailers and into cars and transporting it down to the docks – it took ages and a lot of time was spent just hanging around, but at the end we must have loaded probably close to a tonne of gear (literally) onto the ship.

After having loaded up, we got some sandwiches from town and had lunch on board. Everything went quite smoothly except Maia Schweizer (CalTech) seems to have caught a virus and is feeling a bit under the weather.

The ship ('Lance') is an icebreaker (:-D) with room for ~ 30 people excl. the crew who live on board pretty much all year around. The ship also holds a number of labs and is therefore ideal for a science expedition such as AMASE – and apparently this is the same ship (and crew) they used for AMASE last year, before that they used 'Polarsyssel'.

Normally the ship sails around Antarctica, but in the summer it comes to Svalbard and lives here for a while. I’m kind of hoping to go through a lot of ice to see the icebreaker in action, but the crew tells me that with the current wind direction the icecap reseeds north, so it probably won’t happen.

We set out from Longyearbyen around 15:30 and we have about 20 hour transit. The scenery is… incredible, it’s absolutely indescribable! It’s quite cold on deck but the view is worth every gust of wind! We have a pack of seagulls and other birds (unfortunately I’m not much of an ornithologist) following the ship and flying close along side of us. Occasionally you also see helicopters passing by, but mostly the mountains, the magnificent sky and the vast horizon are stealing the attention.

We have just finished dinner – nice traditional Scandinavian meal of potatoes, ham and gravy (and for the Danish who’ll know what I’m talking about, rødgrød med fløde for dessert). Most of us are pretty beat (you see people sleeping in front of their computers all over the ship, including me), but still most of the teams have gone to unpack their equipment, hoping maybe to get a little work done so they can be ready for tomorrow when we arrive at our first site, except for Kirsten E. Fristad (NASA, Goddard Space Flight Center) who’s also doing a blog (www.nasa.gov/mission_pages/mars/news/amase/index.html).

We also have one of the directors from the Norwegian research council, Ragnhild Rønneberg, with us - she was on a trip last week and loved it so much that she was offered to come along with us.

I have taken loads of pictures from the ship, unfortunately the internet connection (2 Kb/s connection - I know, that doesn’t exist, except it does here ;-) the connection to Mars is 125 Kb/s, which tells you a bit about how far the uninhabited part of Svalbard is from civilization ;-) ) will not permit me to send any more pictures from the trip (and maybe not even emails) – I will, however, try to post some as soon as we return to Longyearbyen on the 26th.

Apparently we’re going through an area at the moment where they spotted 8 whales last week (22 m long!), so I’m hoping they’ll sound the horn, which will mean they’ve spotted a whale from the bridge – apparently the whale blow can be up to 5 m high. We spotted a seal from the deck a few minutes ago, but it was quite far from the ship.

I definitely understand the people who keep coming back to this expedition every year (it’s been running for 5 years now) - the company, atmosphere, midnight-sun and scenery are all very addictive.

We just heard the horn (at 21:30) and everybody ran to deck – a huge whale was in sight in front of the ship, we saw two huge blows and then it dived, reappearing five minutes later on the side of the ship where it came up for a single breath and then disappeared.