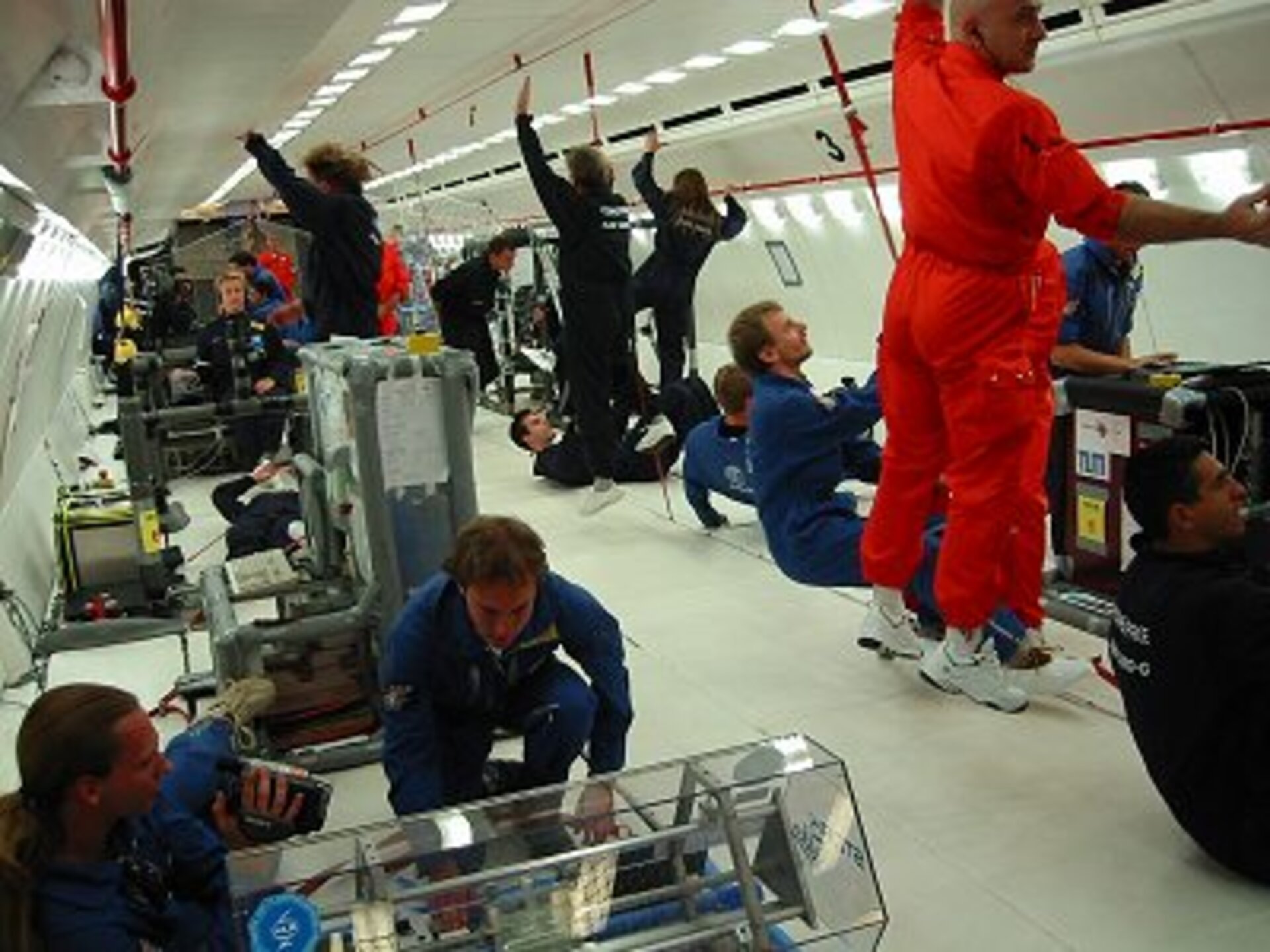 There are students who do research in laboratories, but for some this is just too normal. They want to take their ideas into space. Well, that might not be possible just yet, but a persistent student can get the opportunity to do the next best thing: parabolic flights. It is a way of creating a weightless environment using an aeroplane, and yes, it is very exciting.

This year’s Student Parabolic Flight Campaign, organised by ESA’s Education Office, involved 32 groups of students from various universities across Europe. They were the best from over 120 teams that sent in a proposal to conduct an experiment in weightlessness. Sixteen groups flew during the second week; their colleagues flew the week before.

The Student Parabolic Flight Campaign, a project of ESA’s Education Programme, aims to enhance the youngsters’ knowledge of science and technology and encourage talented youngsters into a career in space. The existing interest the youngsters have for space forms an opportunity for education.

The topics are as diverse as the origins of the students. A group of Italian students has been researching the behaviour of an insect species called Talitris, an adaptive inhabitant of shorelines that runs in and out with the waves. The students are investigating the ability of the Talitris to adapt in weightlessness and hypergravity (double weight).

A team from Finland is investigating the quality of CDs recorded under different gravitational conditions, which is both relevant for taking the technology into space, but might also be of value in improving the quality of the equipment. A group of Portuguese students is studying the detection of smoke in space, one of the most important dangers in a space station. They are also looking at the behaviour of smoke and a possible way of removing it quickly from the air.

These experiments cannot be done well in earthbound labs, due to the ever-present influence of Earth’s gravitational force. Parabolic flights are a perfect test bed for performing space experiments without actually going into space. Being weightless is in fact very easy: jump. Weight could be defined as ‘the inability to fall’. The resistance from the ground that stops you from falling down is the experience we call ‘weight’.

An astronaut is also weightless because he is falling. However, his speed is so high that he is falling 'around' Earth instead of crashing into it. This high speed of around 26 000 km/h that is required for space travel makes it rather expensive. Parabolic flights are cheaper, but the period of weightlessness is only about 20 seconds.

ESA’s parabolic flight campaigns are carried out using an Airbus A300, operated by the French company Novespace. It is a standard passenger jet with a few modifications. The biggest difference compared to a normal aeroplane is the removal of all the seats in the mid-section. This area is covered with a soft material and serves as the experiment area.

To fly a parabola, the pilot makes the aeroplane climb sharply at maximum speed, and then allows it to ‘fall’, which means the thrust of the engines is levelled to precisely match the drag of aeroplane. The aeroplane is steered in such a way that the wings deliver no lift at all, so it is in a state of free fall. Everything inside the aeroplane is now weightless. About 20 seconds later, when the nose is pointing down 42 degrees, the pilot pulls it up sharply. After a short break, the whole process is repeated. During a normal parabolic flight, the pilot flies 31 parabolas.