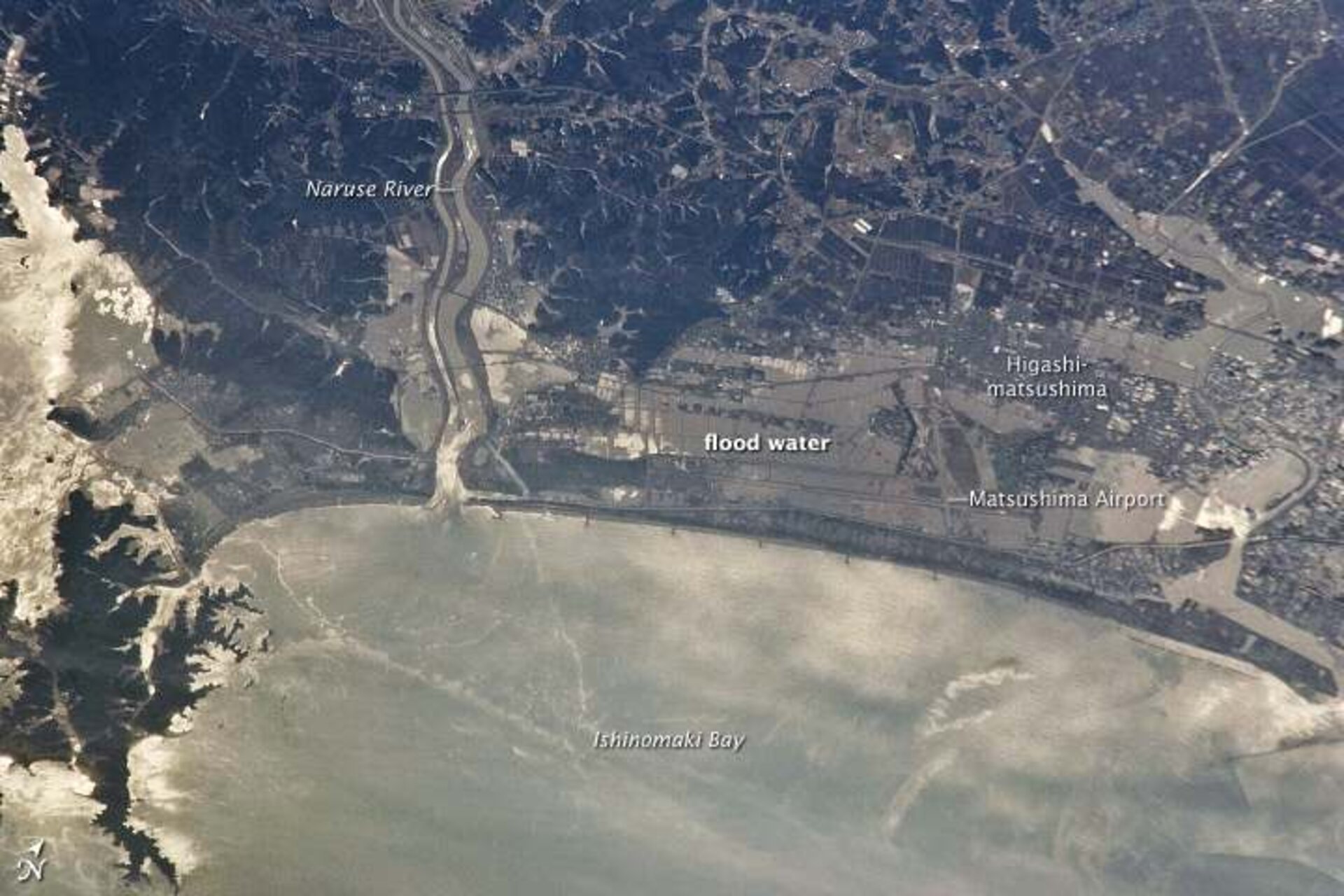 On Mar. 11, 2011, the eastern coast of Japan was shaken by the magnitude 9.0 Tohoku earthquake—one of the strongest earthquakes ever recorded. Caused by fault movement between the Pacific and North American tectonic plates, the quake spawned a tsunami that inundated much of the eastern coastline of the island of Honshu. Along with the tragic loss of human life and widespread devastation to buildings, infrastructure, and agriculture, the tsunami damaged the Fukushima Daiichi nuclear power station, leading to radiation leaks and potentially long-term ecological hazards.

The crew of the space station responded to the crisis and acquired several useful images of flooding from the tsunami. This image, taken on Mar. 13, 2011, illustrates flood waters along the Japanese coast north and east of Sendai. An astronaut on the International Space Station took this image of Higashimatsushima from an altitude of 220 miles (350 kilometers). Both agricultural fields and settled areas are submerged by muddy water, while the crisscrossing runways at Matsushima Airport are surrounded.Far from being dispassionate observers of the disaster, the station crew members expressed their concern and sympathy for the people of Japan via video, radio, and email exchanges. At the onboard press conference on Apr. 13, Cosmonaut Alexander Samokutyaev said, “The tragedy that shocked everybody across the world—the horrible natural disaster that struck the island nation of Japan caused a lot of pain in every Russian’s heart. Since we are neighboring nations and really close to each other and this tragedy can easily happen and impact our territory as well. On our behalf, I would like to say that we would like to enhance the monitoring capabilities. Perhaps we’ll have some new capabilities using scientists all over the world to track and monitor natural disasters in a new fashion that—God forbid—should happen again anywhere in the world.”Astronaut Ron Garan said, “We wanted to say that the strength of our international partnership lies in the fact that we are all together, in the good times and the bad times, and we support each other.” The Mar. 11 earthquake caused severe damage to oil refineries, some of which caught fire. In the aftermath, oil floated on the surface of Ishinomaki Bay. In the photo below, sunglint—the mirror-like reflection of the sun on the ocean’s surface—highlights the oil slicks; oil smoothes the surface and makes the water more reflective. In this image, patches of oil tend to appear lighter than oil-free areas. Other phenomena, however, can lighten the water’s appearance, especially close to the shore.The image illustrates two unique aspects of the station for Earth observation and disaster response. Using handheld digital cameras, the crew has the capability to capture sunglint on water surfaces with greater frequency and control than most satellite-based systems—this provides an enhanced capability to detect and map standing water on the land’s surface and may also indicate areas of particular environmental and health concern for contaminants. True-color images such as these, taken at a variety of pixel resolutions, can also be transmitted to responders on the ground and are readily understandable—little to no post-processing of the imagery is required.As an Earth remote-sensing platform, the station is unique in that it hosts both human-operated and autonomous sensor systems. The “human element” has proved to be useful in both recognizing and capturing imagery of natural processes and features—including catastrophic events—and in providing views that complement other imagers, extending the usefulness of the remotely sensed data.