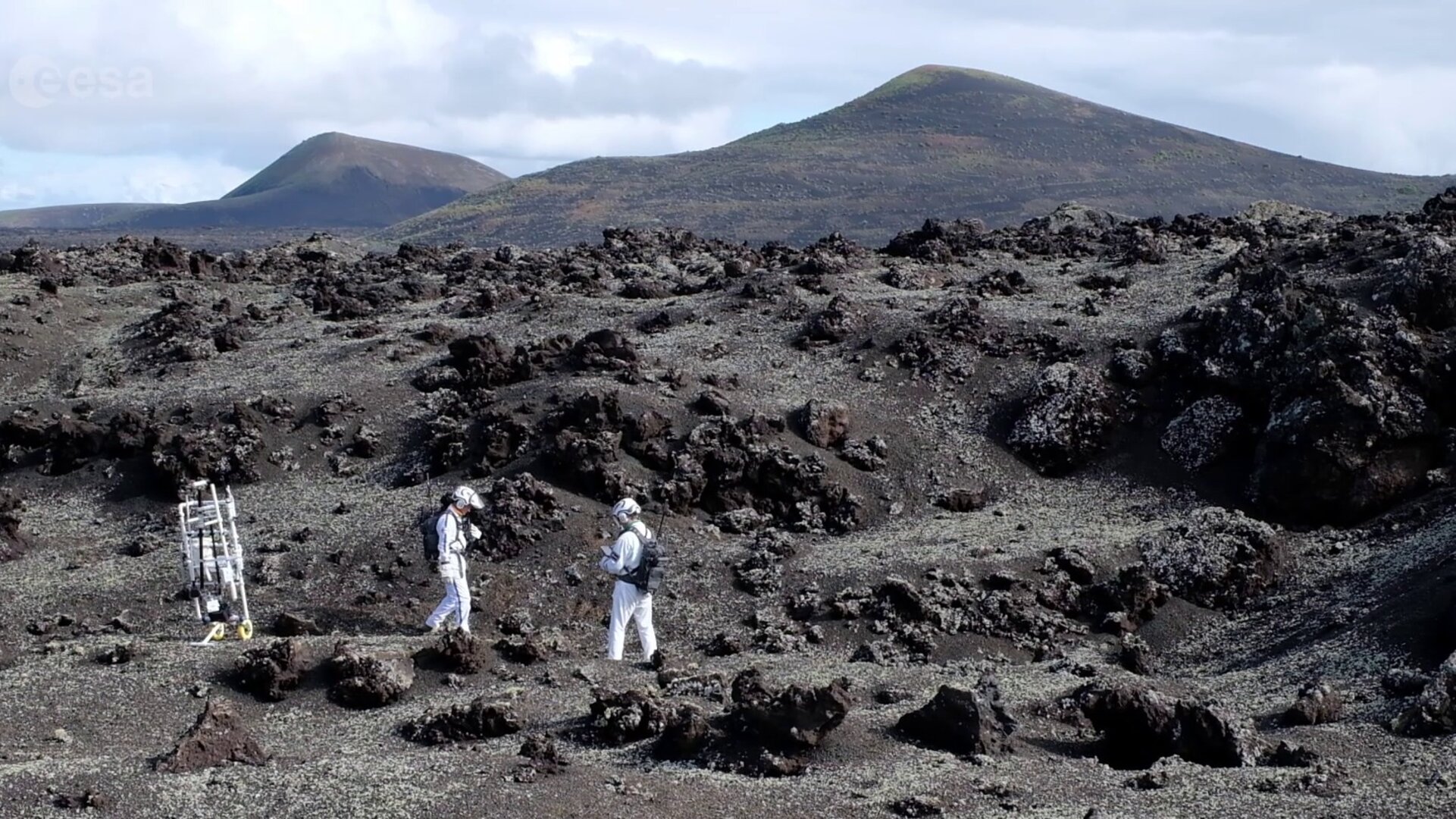 Developing the most efficient and safest way to return to the Moon starts on Earth. European astronauts and spacewalk experts are getting ready for the future of Moon exploration with electronic aids, upgraded geological tools from the Apollo era and improved scientific protocols.

In November, ESA conducted a moonwalk simulation in Lanzarote, Spain as part of Pangaea-X, a test campaign that brought together space exploration, high-tech survey equipment and geology.

This was the second time ESA spacewalk instructor Hervé Stevenin and ESA astronaut Matthias Maurer worked together with geologists and engineers to simulate a lunar spacewalk in this desolate volcanic area.

“We are merging lunar geological knowledge and spacewalk skills to develop European expertise in Moon surface exploration,” says Hervé, who still remembers the magic of watching the first Moon landing from a camping site in France five decades ago. He was only six years old.

Bulky spacesuits in an alien environment are some of the constraints humans will have to deal with on the Moon. The new operational concepts and equipment prototypes being tested take into account the limited movement allowed from wearing spacesuits.

Wearing a pressurised spacesuit, it is not possible to kneel down or bend over. The thick gloves make collecting samples difficult, arm movement is constrained by articulated joints and field of view is limited due to the helmet.

“We do not have a lunar spacesuit for these tests, but after spending many hours training with NASA’s spacesuits we are accustomed to the limitations of mobility. We applied this knowledge – and our body memory – to testing the lunar tools,” says Hervé.

To enhance the efficiency of future expeditions to the Moon, communication between the scientists and astronauts is a key part.

Cameras fitted in the spacewalkers’ gear transmitted live video to the scientists. Wide angle videos, 360 panoramas, close-ups and microscopic images were sent to the spacewalk coordinator and scientists monitoring the activities from mission control.

“The next generation of lunar explorers will be trained in relevant scientific disciplines, but there will always be more expertise on Earth,” says Samuel Payler, research fellow at the European Astronaut Centre in Cologne, Germany.

“The challenge is to have this expertise transmitted to the astronauts during a moonwalk to make the best decisions based on science. Sharing data in real time, including images and video, is an essential part of this.”

Matthias and Hervé received planetary geology training through ESA’s Pangaea course. However, they were advised by a team of scientists in mission control to help them select the most scientifically interesting samples.

The scientists at ground control used an innovative tool called the Electronic Field Book that shows all relevant data in one place and includes voice chat. The communications tool is an all-in-one, easy-to-use and plug-and-play device.

While scientists were forced to take into account safety constraints and spacesuit limitations, the spacewalkers became more familiar with the needs of the geologists through following scientific protocols during analysis and sampling.

These Pangaea-X dry-runs are testing the waters for future exploration with a space gateway , from which a lunar spacewalk coordinator could guide astronauts on the Moon in cooperation with a planetary geologist in mission control on Earth.