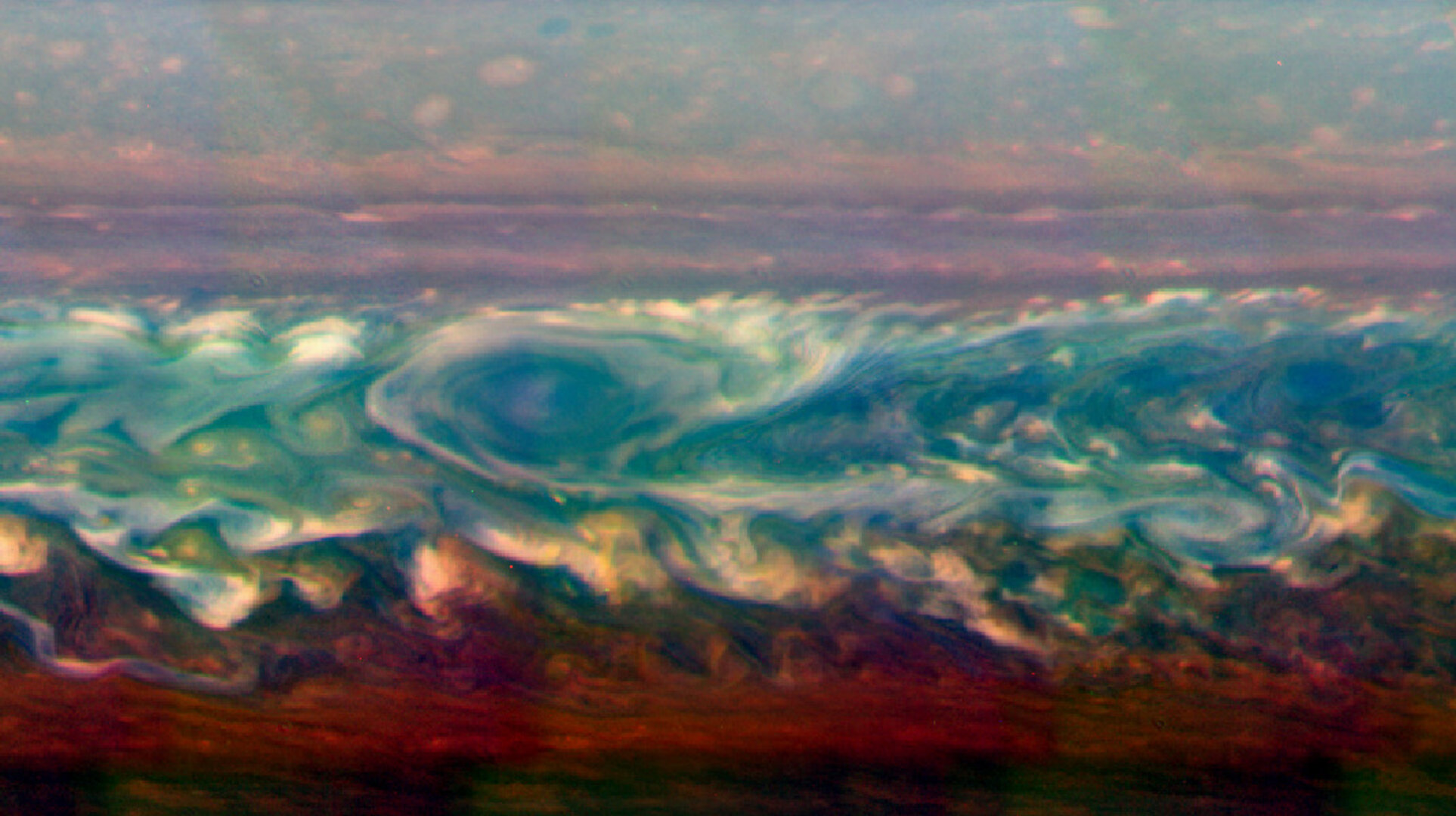 Saturn is approximately 75% hydrogen and 25% helium with traces of other substances like methane and water ice.

Saturn's atmosphere, although similar to Jupiter's, is much less interesting to look at from a distance. But enhanced-colour images allow us to study the bands across which run parallel to the equator much like Jupiter's, indicating violent winds.

Saturn is one of the windiest places in the Solar System, and wind speeds have been clocked at a staggering 1800 kilometres per hour at the equator. Occasionally, violent 'white' storms break through the cloud layers, each one bigger than Earth. One of these was observed by the NASA/ESA Hubble Space Telescope in 1994. Smaller storms occur as darker spots.

There are three regions in Saturn's troposhere (the part of the atmosphere where 'weather' occurs) where clouds of a particular kind, or 'cloud decks', are to be found.

The location of the clouds is predicted based on the temperature at which vapour will condense into droplets. The point at which condensation occurs, on a temperature profile, is where the clouds ought to be.

The temperature in the troposphere ranges from about -130°C to about +80°C.

The top visible cloud deck, made of ammonia clouds, is found at about 100 kilometres below the top of the troposhere (tropopause), where the temperature is about -250°C.

The second cloud deck, made of ammonium hydrosulphide clouds, is found at about 170 kilometres below the tropopause, where the temperature is -70°C.

The lowest cloud deck, made of water clouds, is found at about 130 kilometres below the tropopause, where the temperature is about 0°C (freezing point of water).

The hydrogen gas that makes up most of the atmosphere slowly changes to liquid with depth as the pressure increases. Below the liquid hydrogen rests the heavier liquid helium.

Deep in the depths of the body of Saturn, the hydrogen is then under tremendous pressure, and is transformed to liquid metallic hydrogen. It is believed that a rocky core about ten times the mass of the Earth exists at the centre.