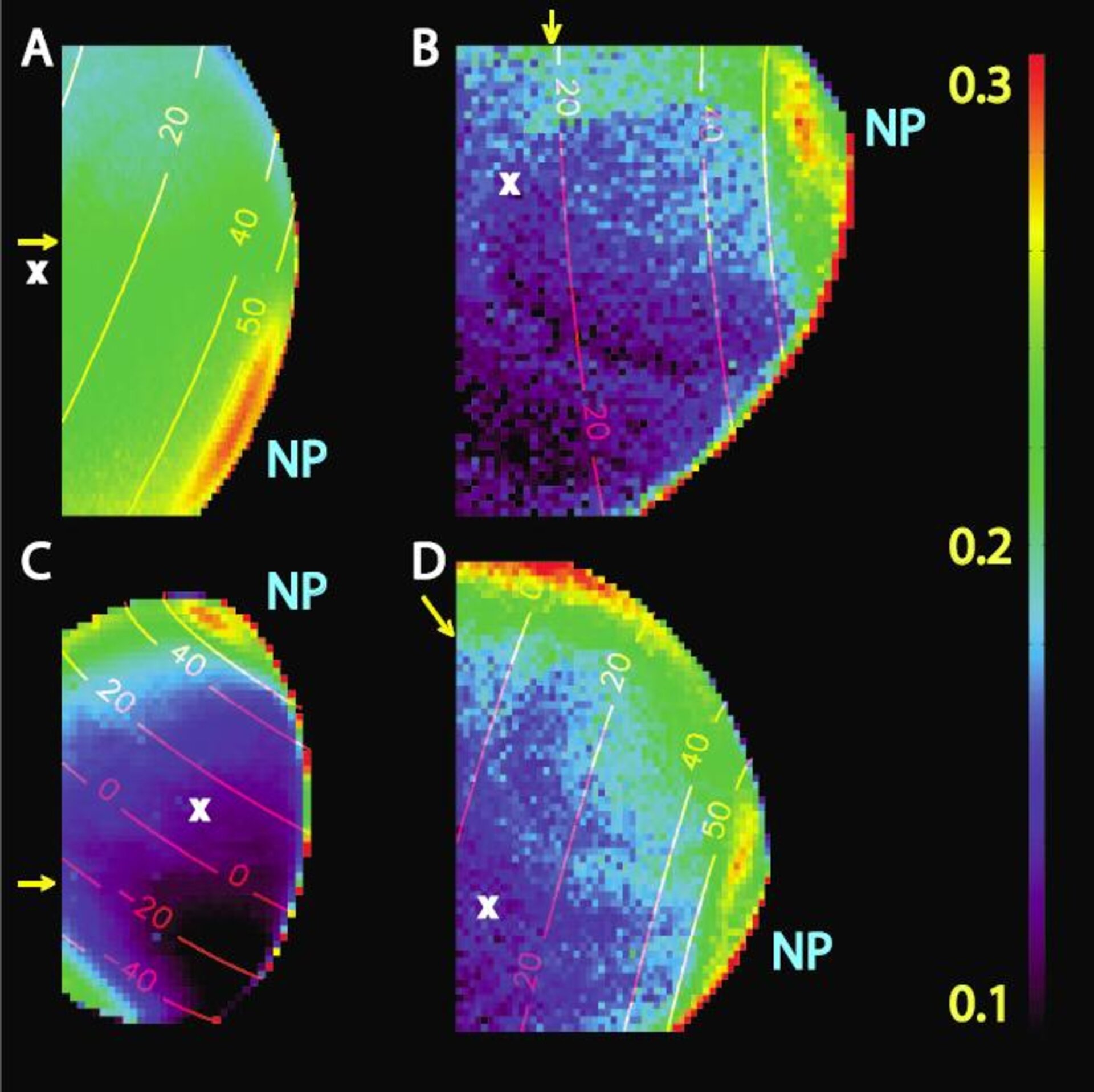 Cassini's Visual and Infrared Mapping Spectrometer (VIMS) has detected what appears to be a massive ethane cloud surrounding Titan's north pole. The cloud might be snowing ethane snowflakes into methane lakes below.

The cloud may be the clue needed in solving a puzzle that has confounded scientists. In fact, so far they had seen little evidence of a veil of ethane clouds and surface liquids, originally thought extensive enough to cover the entire surface of Titan with a 300-metre-deep ocean.

Before the Cassini-Huygens mission began visiting Saturn's giant moon, Titan, in 2004, "we expected to see lots of ethane - vast ethane clouds at all latitudes and extensive seas on the surface of Titan," said planetary scientist Caitlin Griffith at the University of Arizona (UA), and member of the UA-based Cassini VIMS team.

This is because solar ultraviolet light irreversibly breaks down methane in Titan's mostly nitrogen atmosphere. Ethane is by far the most plentiful by-product when methane breaks down. Scientists theorized that if methane has been a constituent of the atmosphere throughout Titan's 4.5 thousand million years lifetime - and there was no reason to suspect it had not - the large moon would be awash with seas of ethane.

Given the lack of evidence for such seas, the missing hydrocarbon reservoir was expected to reside entirely beneath the surface, until NASA's Cassini spacecraft radar found lakes in Titan's north arctic latitudes on a flyby last 22 July. "However, we now know that Titan's surface is largely devoid of lakes and oceans," Griffith said.

VIMS made the first detection of Titan's vast polar ethane cloud when it probed Titan's high northern latitudes on Cassini flybys in December 2004, August 2005, and September 2005.

VIMS detected the cirrus cloud as a bright band at altitudes from between 30 and 60 kilometres at the edge of Titan's arctic circle, between 51º and 69º north latitude. VIMS saw only part of the cloud because most of the northern polar region is in winter's shadow and will not be fully illuminated until 2010.

"Our observations imply that surface deposits of ethane should be found specifically at the poles, rather than globally distributed across Titan's disk as previously assumed," Griffith said. "That may partially explain the lack of liquid ethane oceans and clouds at Titan's middle and lower latitudes."

"We think that ethane is raining or, if temperatures are cool enough, snowing on the north pole right now. When the seasons switch, we expect ethane to condense at the south pole during its winter," Griffith said. If polar conditions are as cool as predictions say, ethane could accumulate as polar ice.

“In July 2004, the Cassini ISS camera had already observed a big and stormy cloud system over Titan’s south pole. This meteorological feature still remains unexplained today,” said Athena Coustenis from LESIA (Observatoire de Paris) and co-author of today’s results. “It seems that the most interesting temporary features on Titan appear at the poles.”

Ethane dissolves in methane, which scientists predict is raining from the atmosphere at the north pole during its cool winter. "During the polar winters, we expect the lowlands to cradle methane lakes that are rich with ethane," Griffith noted. "Perhaps these are the lakes recently imaged by Cassini."

“We may have a way of investigating these possibilities - lake and polar ice contents - with adaptive optics observations from the ground,” added Coustenis. “This would allow us to resolve Titan’s disk.”

If ethane was produced at today's rate over Titan's entire lifetime, a total of two kilometres of ethane would have precipitated over the poles. But that seems unlikely, Griffith said.

Scientists have no direct evidence for polar caps of ethane ice. Titan's north pole is in winter darkness, and Cassini cameras have yet to see it in reflected light. Cassini cameras have imaged Titan's south pole. "The morphology seen in those images doesn't suggest a two-kilometre polar ice cap, but the images do show flow features," Griffith said.

"We're going to start making more polar passes in the upcoming months," she added. "By the end of next year Cassini will have recorded the first polar temperature profile of Titan, which will tell us how cold conditions are at the pole."

“From Voyager data we have indications that the temperatures may drop by as much as 20º Kelvin at the North pole when in winter,” concluded Coustenis. “The Cassini extended mission and future in-situ measurements at Titan (with new space missions) should allow us to better comprehend the seasonal phenomena on Titan, where a season lasts 7.5 years.”

The findings appeared in the 15 September issue of the journal Science, in an article titled: "Evidence for a Polar Ethane Cloud on Titan", by Caitlin Griffith, Paulo Pinteado, the VIMS team leader Robert Brown of the Univ. of Arizona (UA), Athena Coustenis and other researchers from France, the Jet Propulsion Laboratory in Pasadena (JPL), California, the U.S. Geological Survey, Cornell University, NASA Ames Research Center, Portugal and Germany.

Griffith, Pinteado and Robert Kursinski of UA collaborated earlier in studies of the long methane clouds that band Titan at southern latitudes. They concluded from analyzing VIMS images that these highly localized, convective clouds, which are composed of methane, result from summer heating much as thunderstorms form on Earth.

The VIMS instrument is an imaging spectrometer that produces a special data set called an image cube. It takes an image of an object in many colours simultaneously. An ordinary video camera takes images in three primary colours (red, green, and blue) and combines them to produce images as seen by the human eye. The VIMS instrument takes images in 352 separate wavelengths, or colours, spanning a realm of colours far beyond those visible to humans. All materials reflect light in a unique way. So molecules of any element or compound can be identified by the wavelengths they reflect or absorb, their 'signature' spectra.

The Cassini-Huygens mission is a cooperative project of NASA, the European Space Agency and the Italian Space Agency. The Jet Propulsion Laboratory, a division of the California Institute of Technology in Pasadena, California, manages the mission for NASA's Science Mission Directorate, Washington D.C. . The Cassini orbiter and its two onboard cameras were designed, developed and assembled at JPL. The Visual and Infrared Mapping Spectrometer team is based at The University of Arizona in Tucson.