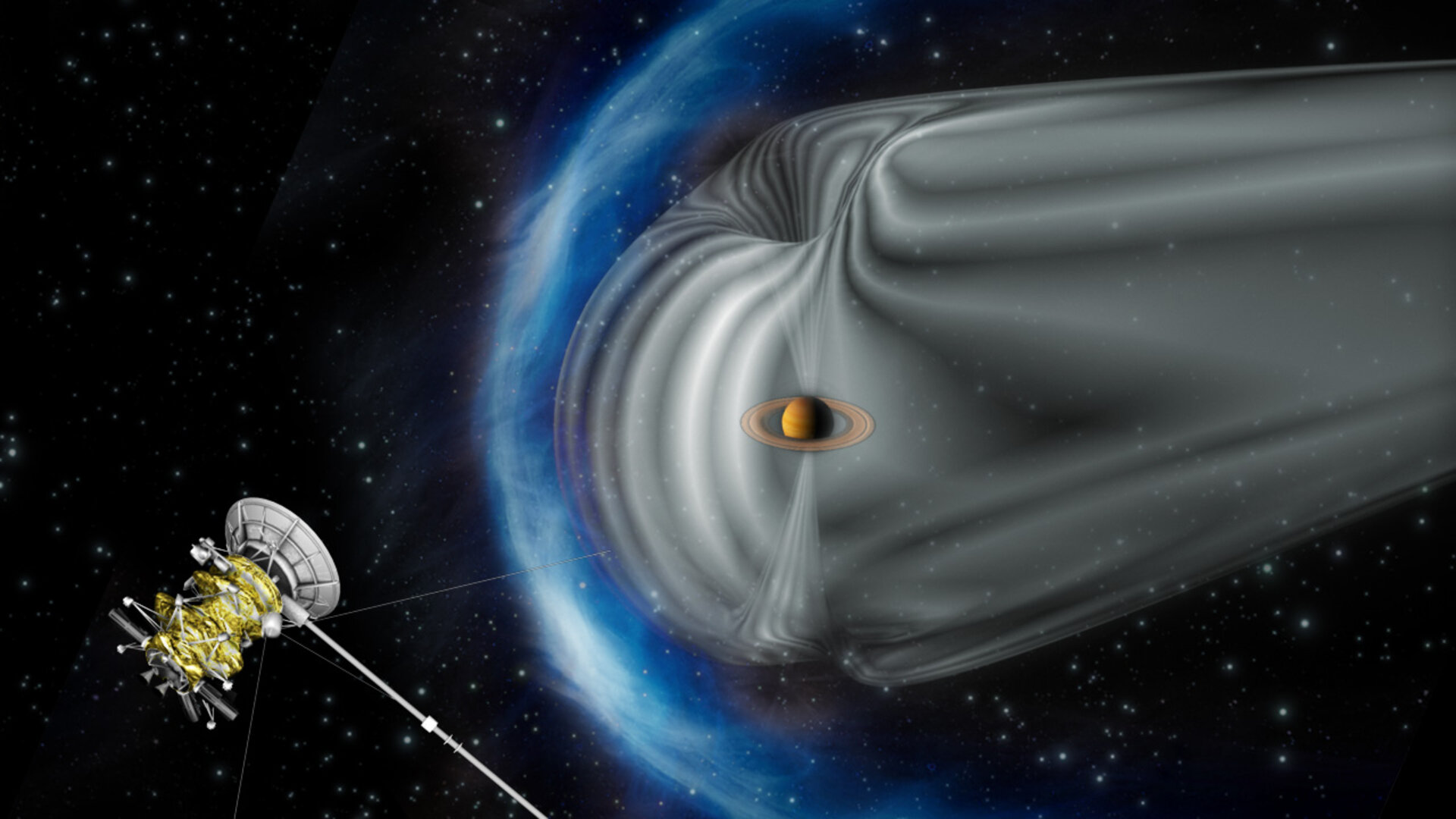 During a chance encounter with an unusually strong blast of solar wind arriving at Saturn, the international Cassini spacecraft detected particles being accelerated to ultra-high energies, similar to the acceleration that takes place around supernova explosions.

Shock waves are commonplace in the Universe, for example in the aftermath of a stellar explosion as debris accelerates outwards in a supernova remnant, or when the flow of particles from the Sun – the solar wind – impinges on the magnetic field of a planet to form a bow shock.

Under certain magnetic field orientations and depending on the strength of the shock, particles can be accelerated to close to the speed of light at these boundaries. Indeed, very strong shocks at young supernova remnants are known to boost electrons to ultra-relativistic energies, and may be the dominant source of cosmic rays, high-energy particles that pervade our Galaxy.

Space telescopes reveal evidence for accelerated electrons at supernova remnant shocks as X-ray emission, but these observations are made at great distances and thus the orientation of the local magnetic field can only be poorly measured at best. Without this crucial information, it is difficult to gain a full understanding of the shock acceleration process.

Scientists want to understand how the acceleration of electrons in very strong shocks with large ‘Mach numbers’ depends on the angle between the magnetic field and a vector at right angles to the shock front. In particular, they are interested in what happens in a ‘quasi-parallel’ shock, where the field and vector are almost aligned, as may be found in supernova remnants.

Shocks in the solar wind in the Solar System are much more accessible and can be studied in greater detail. To date, however, particle acceleration has only been seen in ‘quasi-perpendicular’ shocks, where the magnetic field and shock vector are almost perpendicular.

But this new study by Cassini describes the first detection of significant acceleration of electrons in a quasi-parallel shock at Saturn, coinciding with what may be the strongest shock ever encountered at the ringed planet.

“Cassini has crossed Saturn’s bow shock hundreds of times, recording typical Alfvén Mach numbers of around 12. But during one particular crossing in early 2007, we measured a value of ~100, during which time the shock was quasi-parallel,” describes Adam Masters of the Institute of Space and Astronautical Science, Japan, and lead author of the paper reporting the results in Nature Physics.

The findings confirm that, at high Mach numbers like those of the shocks surrounding supernova remnants, quasi-parallel shocks can become considerably more effective electron accelerators than previously thought. This result sheds new light on the complex process of cosmic particle acceleration.

“Cassini has essentially given us the capability of studying the nature of a supernova shock in situ in our own Solar System, bridging the gap to distant high-energy astrophysical phenomena that are usually only studied remotely,” adds Dr Masters.

“The Cassini observations have given us a glimpse of a process never before seen directly, providing new information on how high-energy particles, like cosmic rays, are accelerated to such high velocities by magnetic fields throughout the Universe,” says Nicolas Altobelli, ESA’s Cassini project scientist.

“Electron acceleration to relativistic energies at a strong quasi-parallel shock wave” by A. Masters et al. is published in Nature Physics, 17 February 2013.