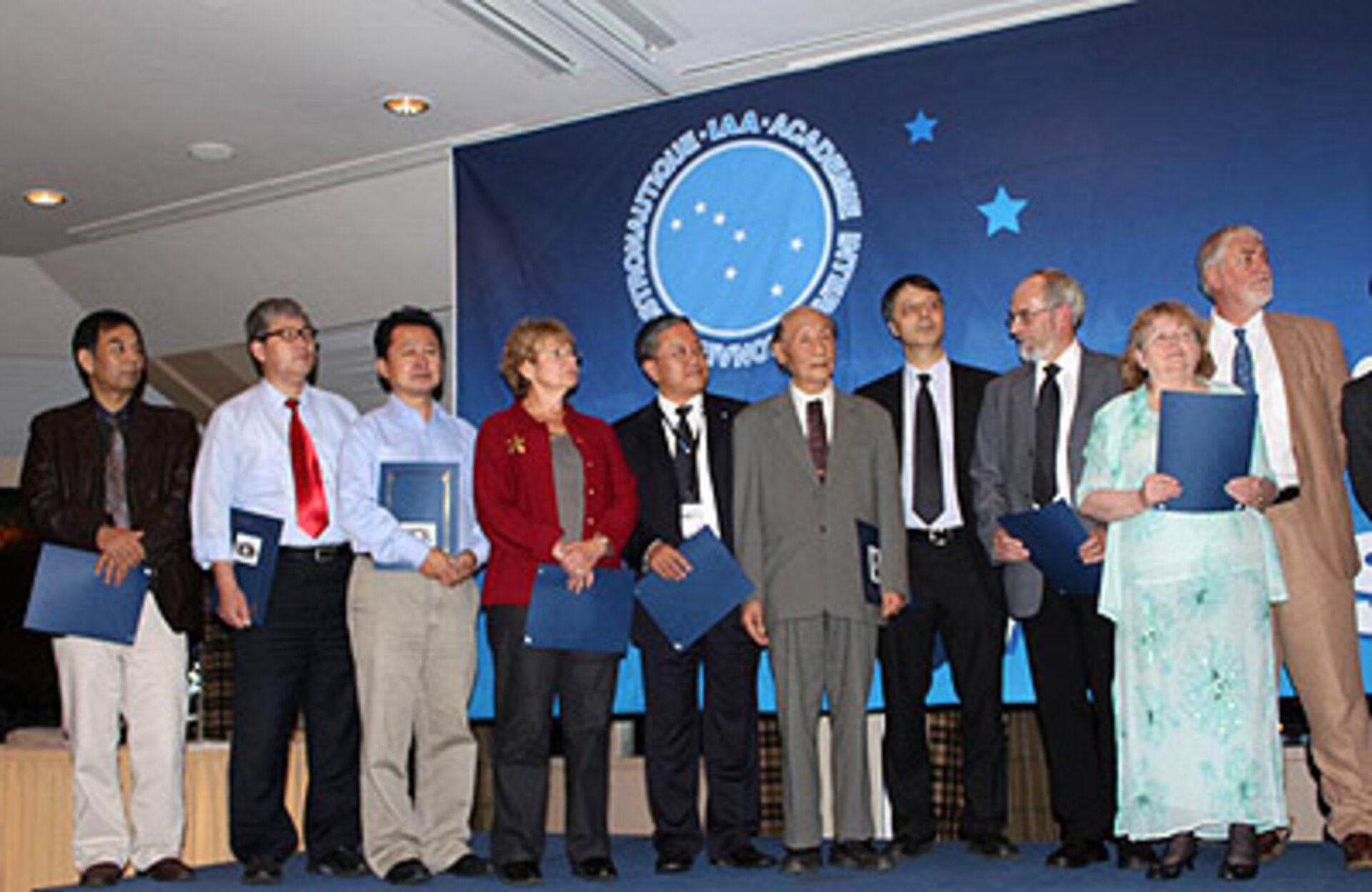 The International Academy of Astronautics (IAA) has decided to award The Laurels for Team Achievement Award to the Double Star/Cluster Team. The official ceremony took place in Prague, Czech Republic, on 26 September, in the margin of the International Astronautical Congress.

The Laurels Team Achievement Award is one of two major awards given by the IAA every year, the other being for individual recipients. This team award was established in 2000 and the first Laurels were given to the Russian Mir Space Station team. In the following years, the awardees of the Laurels included the Space Shuttle, SOHO and Hubble Space Telescope teams.

The Chinese Double Star Programme in concert with the ESA Cluster Program provided an unprecedented measurement capability of geospace. The Double Star Programme consisted of two spacecraft, TC-1 and TC-2, which flew in equatorial and polar orbits near the earth. The Cluster mission is comprised of four identical spacecraft and flies in a higher altitude polar orbit. Together, the six spacecraft enabled the first coordinated six-point measurements of the Earth magnetosphere. During the overlapping period of the two missions from 2004 to 2007, they drew significant attention from both the research community and public, providing many scientific discoveries including: the extent of oscillations in the tail of the magnetosphere, density holes in the solar wind, pulsed magnetic reconnection observed for several hours and crustal cracking of a neutron star. Together with the NASA IMAGE spacecraft, it also provided the first image of the inner magnetosphere, from both the north and the south poles simultaneously.

The Chinese Double Star Programme was the first major China-ESA space science collaboration, in which ESA coordinated eight European built instruments onboard TC-1 and TC-2. These instruments were all from Cluster heritage except the Neutral Particle Imager on TC-2. In addition, ESA provided ground station support for data reception and science operations for the European instruments. The Chinese National Space Administration was responsible of all other systems of the programme.

The origin of this cooperation was driven by a Chinese scientific interest in the ESA Cluster mission, leading to close collaboration between Chinese and European scientists working together since 1993. The Chinese Academy of Sciences (CAS) set up a Cluster data analysis centre at the Center for Space Science and Applied Research (CSSAR) in Beijing. Subsequently, many Chinese scientists and students visited ESA and European institutes associated with the Cluster mission, including long period exchange and PhD programs.

The next step came in 1997, when Prof. Liu Zhenxing from CSSAR, proposed the Double Star Programme. In November 1997, ESA sent a delegation, led by the science director of ESA at that time, Dr. Roger Bonnet, to visit CSSAR. After learning the details of the program, a cooperation protocol with CSSAR was signed, to provide Cluster flight spare instruments to the Double Star Programme. This was the first action of this cooperation, which later became a major collaboration between ESA and the Chinese National Space Administration (CNSA).

“I am very pleased to see our cooperation with the Cluster team being acknowledged by this award. My cooperation with the Cluster team can be traced back to 1992 when I joined the data analysis program of Cluster mission. Later on, we worked closely on the Double Star Programme. It opened a new era in the study of the magnetosphere with coordinated multiple spacecraft”, says Professor Liu, Academician of the Chinese Academy of Sciences.

“The Double Star programme was highly beneficial for Europe and China. It has not only boosted the scientific achievements of both missions but also built a solid scientific and engineering bridge between Europe and China. Space science is new in China. I am happy that the first space science mission in China sets a model in international cooperation for future missions”, underlines Ji Wu, CSSAR Director.

“By coordinating the science operations of the Double Star programme with the Cluster mission, Chinese and European scientists were able to obtain scientific results that were impossible to achieve with the missions independently. We are honoured that this close team work has been so highly rewarded”, says Philippe Escoubet, Double Star and Cluster mission manager of the European Space Agency.