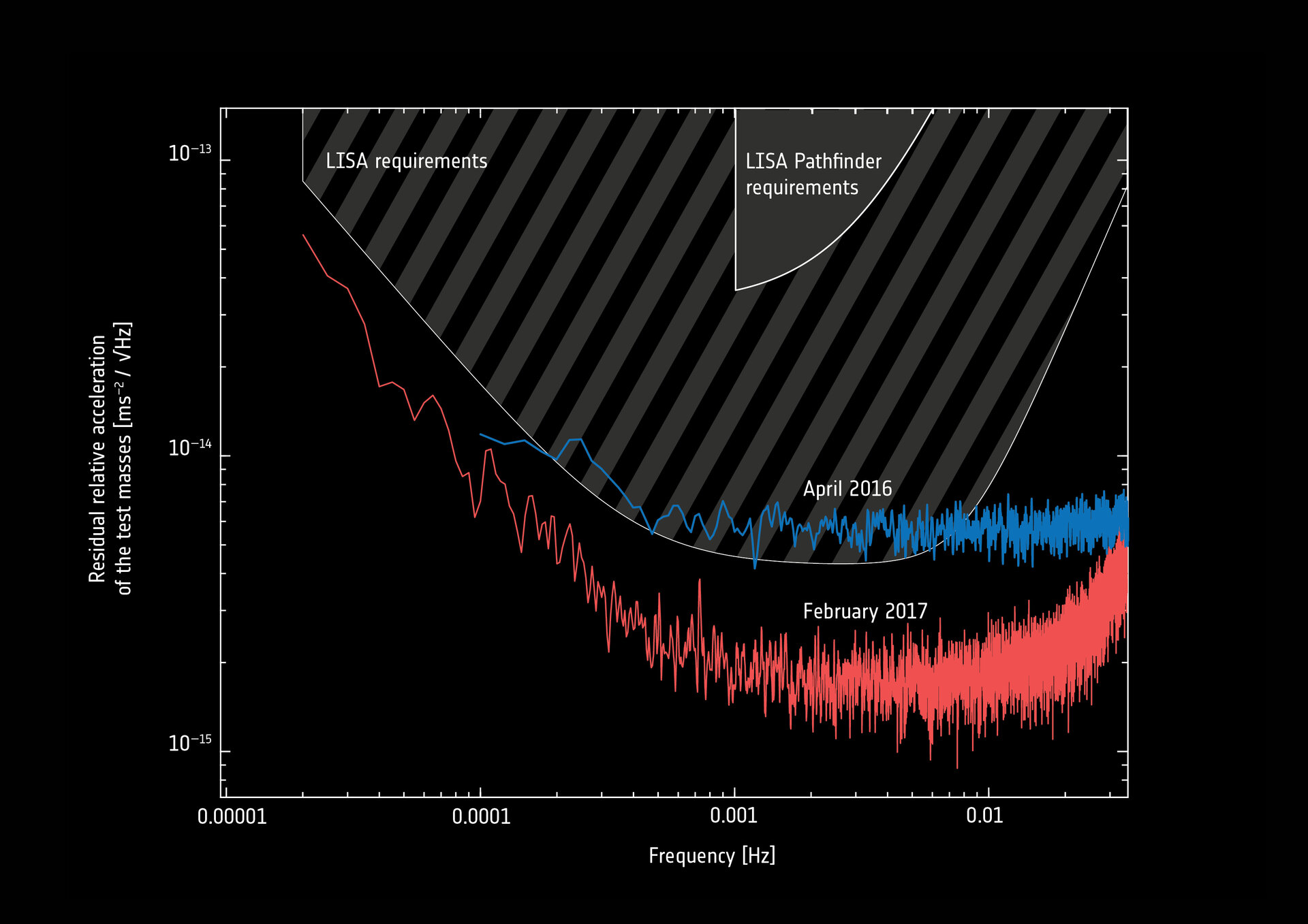 Imagine a packed party: music is blaring and you can feel the bass vibrate in your chest, lights are flashing, balloons are falling from the ceiling and the air is filled with hundreds of separate conversations. At the same time your cell phone is vibrating in your pocket and your drink is fizzing in the glass. Now imagine you can block out this assault on your senses to create a perfectly quiet bubble around you, only letting in the unmistakable voice of your best friend who’s trying to get your attention from the other side of the room.

Applied to the grand scale of the Universe, that’s a bit like the level of noise detection and reduction ESA has proven with its LISA Pathfinder mission in order to create the quietest place in space. Why? To set the stage for its successor, LISA, to detect gravitational waves from high-energy events in space.

Gravitational waves are ripples in the fabric of spacetime that travel out from the source. Even as you accidentally bump into someone at the crowded party you make a gravitational wave, but it is so insignificantly small as to be undetectable. You need the interaction between attention-seeking objects with a large gravity, something as large and powerful as the collision of two black holes, or the explosion of a dying star, or the dance of two super-dense neutron stars spinning wildly around one another, to create any noticeable ripple in spacetime.

But even then the distortion effects are at the minuscule scale of a few millionths of a millionth of a metre over a distance of a million kilometres. You wouldn’t even notice if such a gravitational wave passed through you while you were reading this article, but yet the Universe is teeming with their echoes. 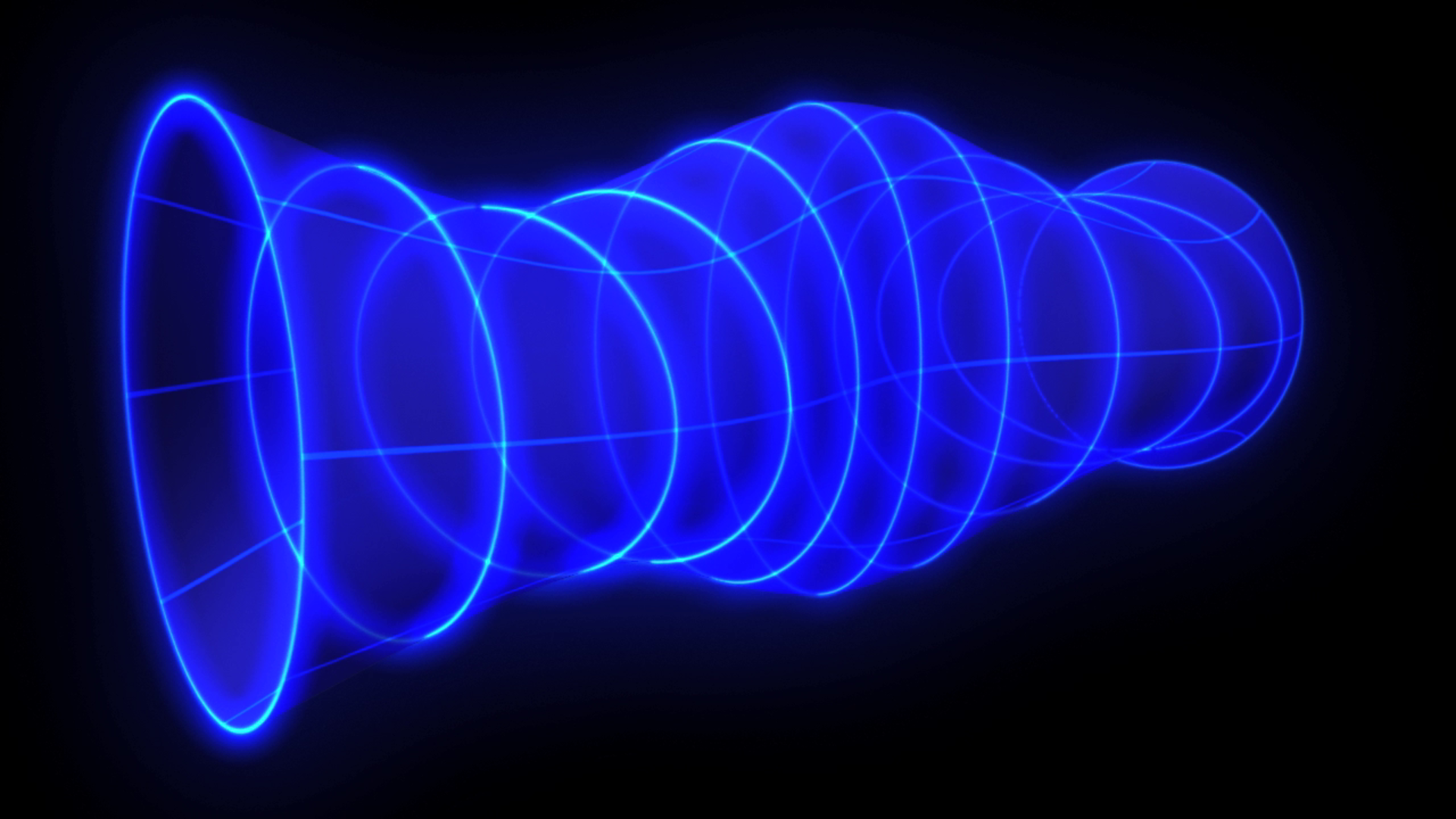 The trick in detecting them is first to reduce all external noises, and then look out for the minute stretch-and-squeeze effect by the change they induce to space, which can be measured, for example, using a laser beam. That is, if the space between two points gets stretched it takes longer for the laser beam to go from one point to another; conversely, if it gets compressed, the beam reaches the second point slightly quicker.

This concept has already been proven on Earth with the Laser Interferometer Gravitational-Wave Observatory, LIGO, and the Virgo observatory. These facilities, operated by an international collaboration of over a thousand scientists, comprise pairs of either three or four km-long ‘arms’ at 90º to one another, each equipped with a laser beam and mirror system. As a gravitational wave passes through, the lengths of the arms are lengthened and shortened respectively by a minuscule fraction, tiny but enough to be noticeable as a change in the reflected laser pattern by the highly accurate equipment.

This was first achieved in 2015 when a gravitational wave was recorded, produced by a pair of coalescing black holes several tens the mass of our Sun, about 1.3 billion light-years away. With the detection of this brief 0.2 second signal, Einstein’s century-old prediction about the very existence of gravitational waves was proven right.

However, Earth detectors have limited space and they cannot escape external influences, ranging from vehicles passing by to local seismic activity. Their size is great for detecting high-frequency (10–1000 Hz) gravitational waves, like those coming from coalescing pairs of stellar-mass black holes or neutron stars, but isn’t sensitive to lower frequency waves (0.00002–0.1 Hz) generated by supermassive black holes a million times more massive than the Sun. In addition, a cosmological background of gravitational waves covering the entire spectrum down to even lower frequencies (0.000000000000001 Hz)  are thought to be produced by the formation of Universe itself in the theorised phase of ‘inflation’, the brief, accelerated expansion in its first moments 13.8 billion years ago.

To access the lower-frequency waves, we need to use the playground of space. Enter ESA’s Laser Interferometer Space Antenna – LISA – a three-satellite fleet that will create a triangular formation separated by 2.5 million km and connected by laser beams, following Earth in orbit around the Sun. Such an endeavour, planned for launch in 2034, is pushing the boundaries of current technology.

Indeed, the key requirement for a space mission to measure any possible distortion caused by a passing gravitational wave is that it is isolated from all external and internal forces, which are present even in space, except gravity. To prove the fundamental concept of such a mission, ESA and its partners built LISA Pathfinder, which successfully concluded last year, having demonstrated that offending internal and external ‘noise’ sources could indeed be removed to provide the quiet environment needed to make gravitational wave detections with the full-size LISA mission.

To achieve this, the technology demonstrator mission used two 2 kg free-falling cubes separated by 38 cm and linked by lasers. The spacecraft acted as a shield around them, protecting them from external sources. It manoeuvred around them using tiny micro-newton thrusters to oppose solar radiation pressure and wind of particles, sensing the test mass motion and adjusting its own to compensate: essentially flying to within an accuracy of a few billionths of a metre and being able to sense the relative positions of the metal cubes to within a trillionth of a metre.

The mission already outperformed itself in the first week of operations, and now the final report card is in, showing that it even surpassed some of the requirements for its next-generation successor. These results are published today in Physical Review Letters.

The improvements since the initial two months dataset focused on the lower frequencies, since at higher frequencies, between 60 mHz and 1 Hz, the mission’s precision was limited only by the sensing noise of the equipment used to monitor the position and orientation of the test masses.

After many more months in space, the data showed a 10-fold reduction in the effect of escaping residual gas pressure inside the spacecraft, which caused gas molecules to bounce off the cubes – just as gas bubbles in your fizzy drink bounce off ice cubes or the glass, and the drink eventually goes ‘flat’.

More data also led to improved understanding of the small inertial force acting on the cubes caused by a combination of the shape of LISA Pathfinder’s orbit and the effect of the noise in the signal of the startrackers used to orient it – improved control in LISA will eliminate this force further.

A more accurate calculation of the electrostatic forces of the onboard electrical systems and magnetic fields has also now eliminated a systematic source of low-frequency noise.

Importantly, statistical analysis has allowed scientists to remove the effects of additional sporadic events to measure the noise at even lower frequencies than expected, down to 0.00002 Hz, essentially creating the quietest place in space. Overall, this proves that measurements at the low frequencies needed for LISA can be realised. It means that instead of only being able to detect a passing gravitational wave from a single event for a fraction of a second, LISA will be able to detect month- or even years-long chatter of multiple signals.

Furthermore, it will be sensitive to the first signs of a supermassive black hole merger, weeks before it has fully collided. This will give time to alert other ground- or space-based observatories so that they can also tune in to study the object at a range of other complementary wavelengths.

It will then be up to Europe’s next generation of scientists to decipher which soundtrack emanates from which mysterious broadcaster in the Universe, giving us all VIP access to the guest list at the gravitational wave party.

LISA Pathfinder is an ESA mission with important contributions from its member states and NASA.

LISA recently passed its Mission Definition Review, during which the design feasibility and the science and technology requirements are reviewed and defined. The mission is scheduled for launch in 2034.