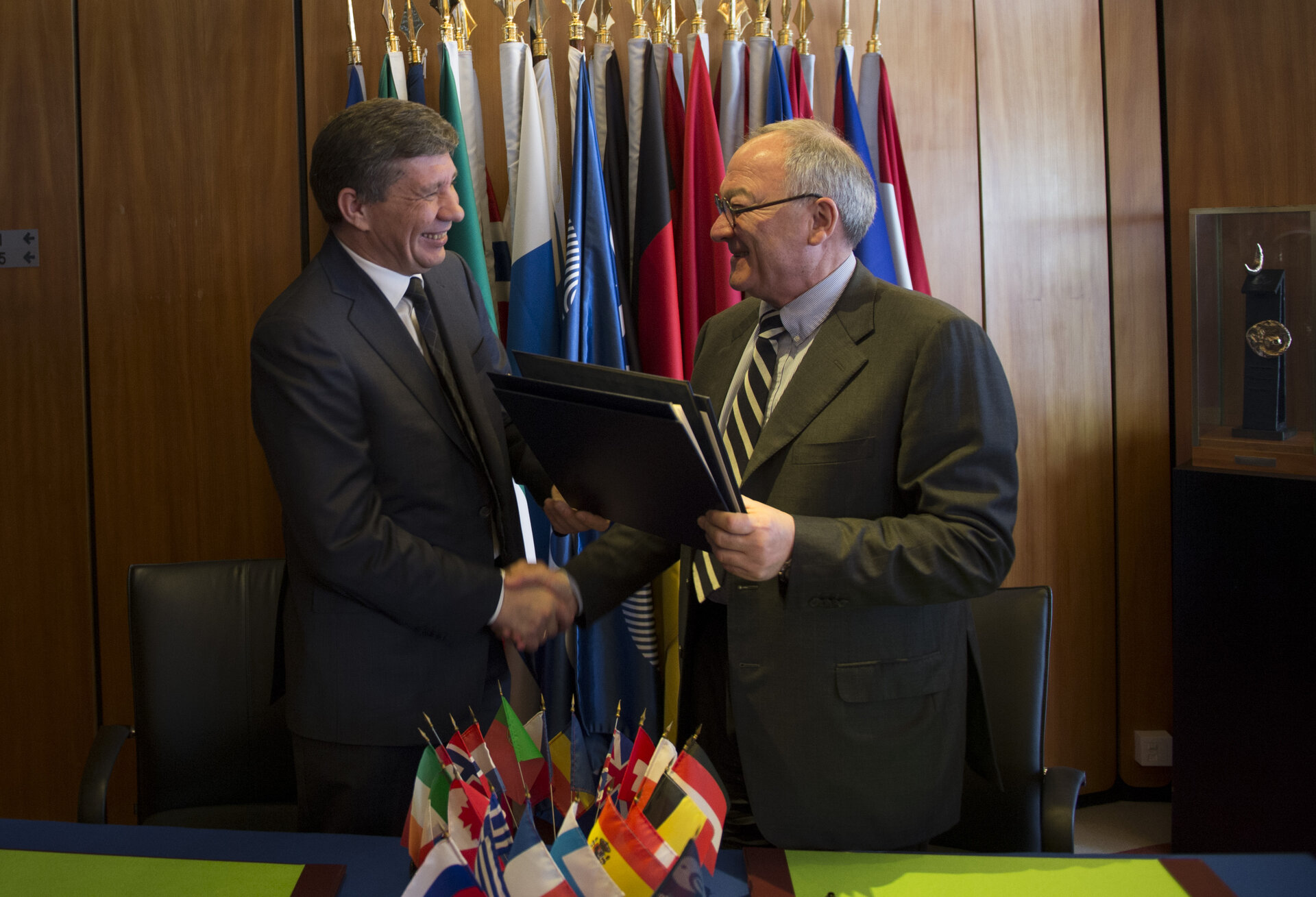 ESA and the Russian federal space agency, Roscosmos, have signed a formal agreement to work in partnership on the ExoMars programme towards the launch of two missions in 2016 and 2018.

Establishing whether life ever existed on Mars is one of the outstanding scientific questions of our time and the highest scientific priority of the ExoMars programme.

The partners have agreed a balanced sharing of responsibilities for the different mission elements. ESA will provide the Trace Gas Orbiter (TGO) and the Entry, Descent and Landing Demonstrator Module (EDM) in 2016, and the carrier and rover in 2018.

Roscosmos will be responsible for the 2018 descent module and surface platform, and will provide launchers for both missions. Both partners will supply scientific instruments and will cooperate closely in the scientific exploitation of the missions.

ExoMars will also demonstrate core technologies under development by European industry such as landing, roving, drilling and sample preparation that are an essential part of paving the way for the next big step in the robotic exploration of Mars: a sample-return mission.

The 2016 mission has two major ESA elements: TGO and EDM. TGO will search for evidence of methane and other atmospheric gases that could be signatures of active biological or geological processes. It will also serve as a data relay for the 2018 mission. EDM will land on Mars to prove key technologies for the 2018 mission.

In 2018, the ExoMars rover, to be provided by ESA, will search the planet’s surface for signs of life, past and present. It will be the first Mars rover able to drill to depths of 2 m, collecting samples that have been shielded from the harsh conditions of the surface, where radiation and oxidants can destroy organic materials.

The rover will be delivered by a Russian descent module that includes a surface platform equipped with additional scientific instruments.

Today, ESA Director General Jean-Jacques Dordain and Head of Roscosmos Vladimir Popovkin met at ESA Headquarters in Paris to sign an agreement that seals ExoMars as a partnership between the two space agencies.

“This is a momentous occasion for the ExoMars programme that will see industry and scientists from Europe and Russia working together on these two exciting missions, which will develop new technologies that will demonstrate the competitiveness of European industry, be important for preparing a solid participation of ESA in future international exploration missions and address the key question of whether life ever arose on Mars,” says Jean-Jacques Dordain.

“It has been a long way, we have performed a large amount of work together. The ExoMars programme is to become the second large project after Soyuz in Kourou,” says Vladimir Popovkin.

“It confirms again that projects of such tremendous scale have to be implemented through international cooperation. The scientific data that we are going to obtain during all the planned missions are important for the worldwide community.”

NASA will also deliver important contributions to ExoMars, including the Electra UHF radio package for TGO, and Mars Proximity Link telecom and engineering support to EDM.

Today’s signature between ESA and Roscosmos provides the basis for industry and scientific institutes to begin full cooperation on the missions and to meet the challenging schedule, with the first launch planned in January 2016.

The ExoMars Programme is funded by 14 ESA states (Austria, Belgium, Denmark, France, Germany, Italy, the Netherlands, Norway, Portugal, Spain, Sweden, Switzerland, and the UK and Canada) of which Italy is the largest contributor and the UK the second largest. Member states also provide scientific instruments to ExoMars. For the 2016 TGO, these include the infrared and ultraviolet spectrometer package NOMAD (led by Belgium) and the CaSSIS high-resolution colour stereo camera (led by Switzerland). Italy will lead the DREAMS environmental station on EDM.