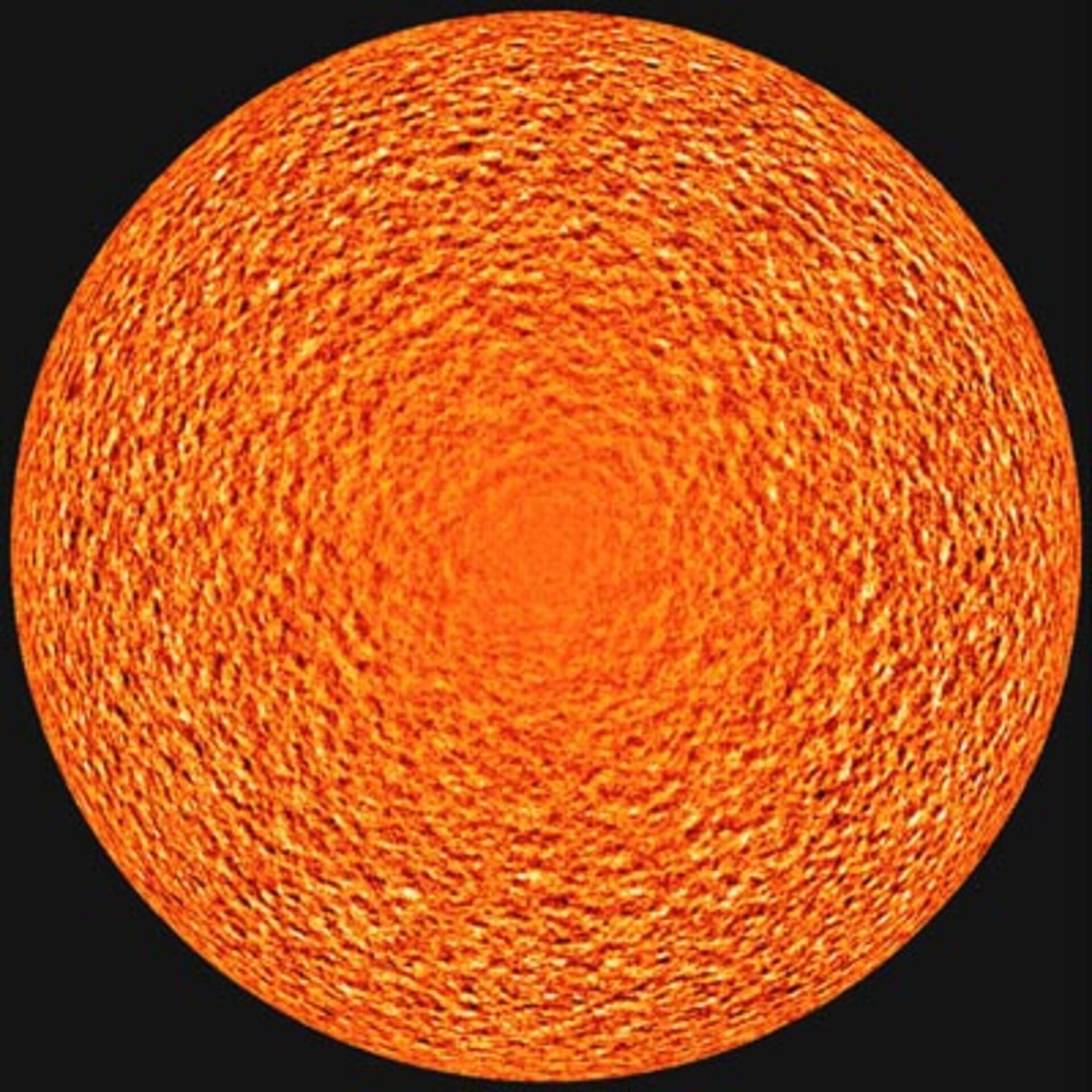 Our Sun has large features that move across its surface as it rotates. Scientists call them 'supergranules'. Thanks to data from the SOHO spacecraft, scientists believe they have found out why supergranules move faster than the Sun rotates. They do not move faster at all. The apparent rapid rotation is an illusion generated by a pattern of waves, like spectators doing the wave at a sporting event.

The Sun's visible surface, the so-called photosphere, is covered by several thousands of supergranules. These regions have horizontal outflows about 30 000 kilometres wide. They are large enough to cover the Earth twice. Forming a network of cells, they are called supergranules because of similar, but smaller features called granules that are about 1000 kilometres wide. Scientists think that these smaller granules are convection cells of plasma (electrified gas) that transfer heat from the solar interior to the surface, similarly to the turbulent surface of a simmering pot of soup. Measuring the regular granulation's rate of rotation is almost impossible because of their short lifetime of only a few minutes. Scientists presume they follow the general rotation of the solar plasma in which they occur.

Supergranulation cells, on the other hand, have a lifetime of a few days, and you can measure their rate of rotation by tracking them individually over time. Although at first glance they appear to follow the rotation of the solar surface, a closer inspection reveals that they move a few percent faster. Why? This has puzzled and intrigued solar physicists for about 25 years. Thanks to the data gathered from SOHO's MDI instrument, scientists have now found that the excess movement of the supergranulation is a wave phenomenon, not an actual movement of the plasma. The process is similar to people in a stadium doing the wave. Nobody actually moves in the direction of the wave, they just jump up and sit down. In the same way, supergranules do not really move faster than the solar surface.

The waves travel in all directions across the solar surface, but for some reason they are stronger (have a greater amplitude) in the direction of the solar rotation. This favoured direction creates the illusion of movement faster than solar rotation in the first place, since the waves moving with the Sun's rotation are most prominent. The discovery goes a long way towards explaining the nature of supergranulation. The next step is to understand what is causing this pattern of wave activity. Laurent Gizon of the W.W. Hansen Experimental Physics Laboratory (HEPL), Stanford University (California), lead author of the discovery, suspects that the interaction between convection and rotation causes the supergranulation waves. Supergranules have a characteristic size of 30 000 kilometres but no one knows why. How deep they are is also unknown.

If we can understand supergranulation, we may work out what transports magnetic fields and disperses them near the solar surface. Understanding the dynamics of solar magnetism better, and rapid changes in solar magnetic fields specifically, means you can understand violent solar activity, such as flares and coronal mass ejections. When solar activity is that powerful, it can affect the surroundings of the Earth, its atmosphere, and technological systems in space and on the ground.

Experts obtained these results using MDI data from 1996, a year when violent solar activity was less frequent, so the wave patterns could be seen clearly. Our Sun moves through an 11-year cycle of activity, from quiet to stormy and back again. Experts will now use and compare data from more recent, stormier periods to see if the level of solar activity affects the waves in some way.

Commenting on this result, which had not been predicted by any simulation or theory, Bernhard Fleck, SOHO Project Scientist at ESA, says: "This is a fascinating result. It makes me hopeful that we will be able to develop an improved understanding of supergranulation, a phenomenon discovered over 40 years ago, but one we know so little about. Since supergranules play a key role in the transport and dispersal of magnetic fields, this result is not only fascinating but also an important step in our quest to understand the solar cycle."

The discovery was published in the 2 January 2003 issue of Nature.

SOHO is a project of international collaboration between the European Space Agency (ESA) and NASA. The spacecraft was built in Europe for ESA and equipped with instruments by teams in Europe and the USA. NASA launched SOHO in December 1995, and in 2002 ESA decided to extend its highly successful operations until 2007.