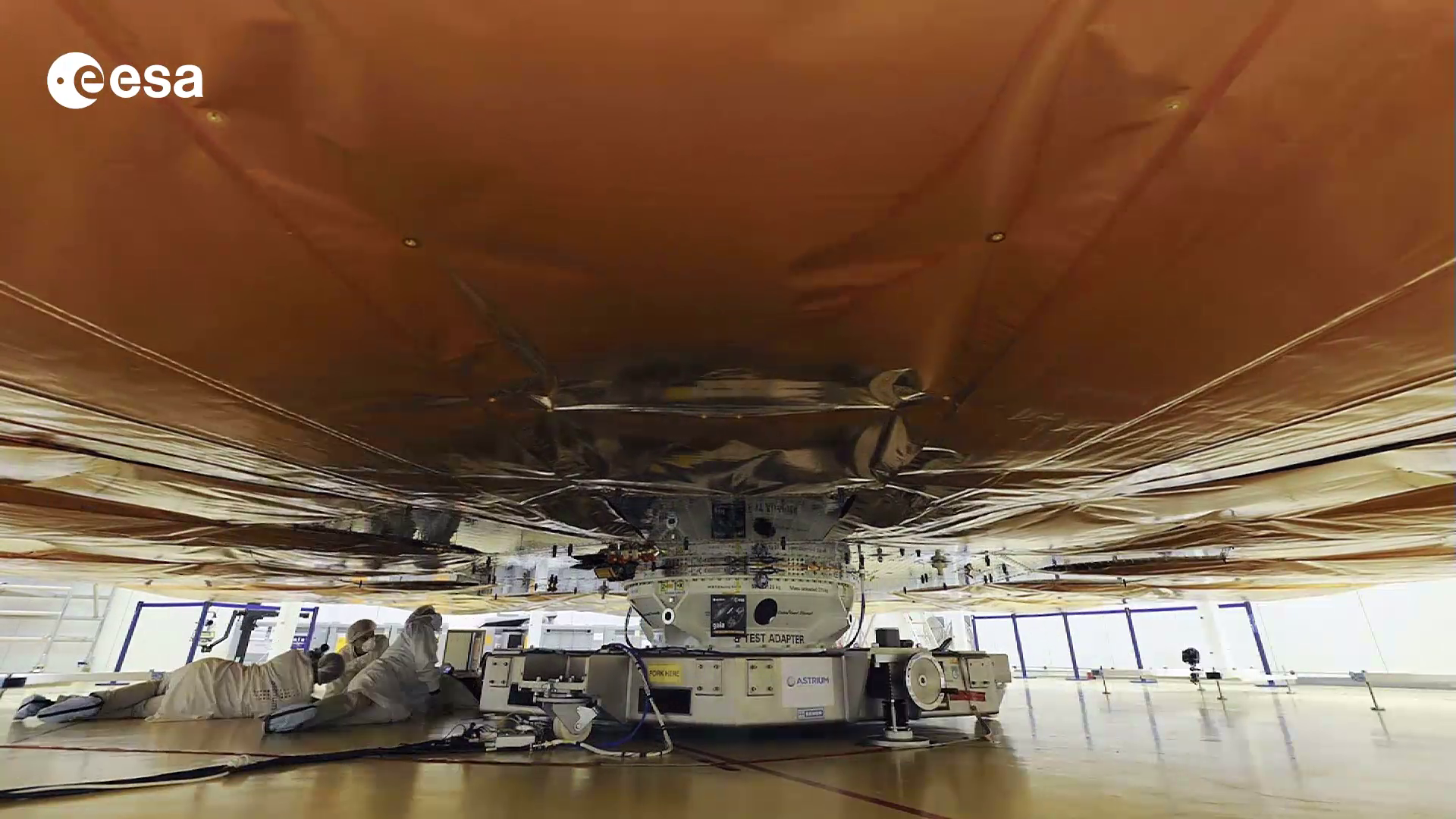 ESA’s billion-star surveyor Gaia will be launched from Europe’s spaceport in Kourou on 20 November to begin a five-year mission to map the stars with unprecedented precision.

Gaia’s main goal is to create a highly accurate 3D map of our Milky Way Galaxy by repeatedly observing a billion stars to determine their positions in space and their movement through it.

Other measurements will assess the vital physical properties of each star, including temperature, luminosity and composition. The resulting census will allow astronomers to determine the origin and the evolution of our Galaxy.

Gaia will map the stars from an orbit around the Sun, near a location some 1.5 million km beyond Earth’s orbit known as the L2 Lagrangian point.

The spacecraft will spin slowly, sweeping its two telescopes across the entire sky and focusing their light simultaneously onto a single digital camera, the largest ever flown in space – it has nearly a billion pixels.

For the last two months Gaia has been rigorously tested in Kourou as part of the launch campaign.

“Getting ready for launch is an extremely busy phase for the mission teams, but it’s also extremely exciting and rewarding to see our mission so close to launch,” says Giuseppe Sarri, ESA’s Gaia project manager.

Earlier this month the spacecraft’s sunshield passed the final deployment test in the cleanroom in Kourou. It has now been stowed in its final configuration ready for the launch.

Shortly after launch, the sunshield will be deployed, forming a 10.5 m-wide ‘skirt’ around Gaia’s base.

The shield has two purposes: to shade Gaia’s sensitive telescopes and cameras from sunlight, allowing them to cool to their operating temperature of –110°C, and to provide power to operate the spacecraft. The Sun-facing side of the shield is partially covered with solar panels to generate electricity.

“With this important milestone – and others – now completed, we are working through an intensive checklist of final activities that will culminate in the much-awaited launch of our ‘discovery machine’,” adds Giuseppe.

Tomorrow at ESOC, ESA’s European Spacecraft Operations Centre in Darmstadt, Germany, the Gaia Mission Control Team will conduct a full simulation for the critical launch and early orbit phase of the mission.

Meanwhile, back at Kourou, Gaia will be transferred to the fuelling facility to fill the tanks of its propulsion system, used to orient the spacecraft once it reaches space.

In the first week of November, the spacecraft will be mounted on the Soyuz launcher adapter and then integrated with the upper stage, which will eventually help boost Gaia onto its journey to L2.

The Soyuz fairing will then be added, the nose cone that protects the sensitive spacecraft during the first four minutes of launch.

On 15 November, Gaia will be moved to the launch pad for integration with the Soyuz launcher itself. Finally, the rocket will be fuelled.

“We are excited to see the launch less than one month away, but there are still a lot of final preparations to complete,” says Timo Prusti, ESA’s Gaia project scientist.

“Our quest to create an enormous stellar census to solve questions on the origin, structure and evolutionary history of our home Galaxy, and to discover tens of thousands of supernovas, previously unseen asteroids and even planets around nearby stars, is finally about to begin.”