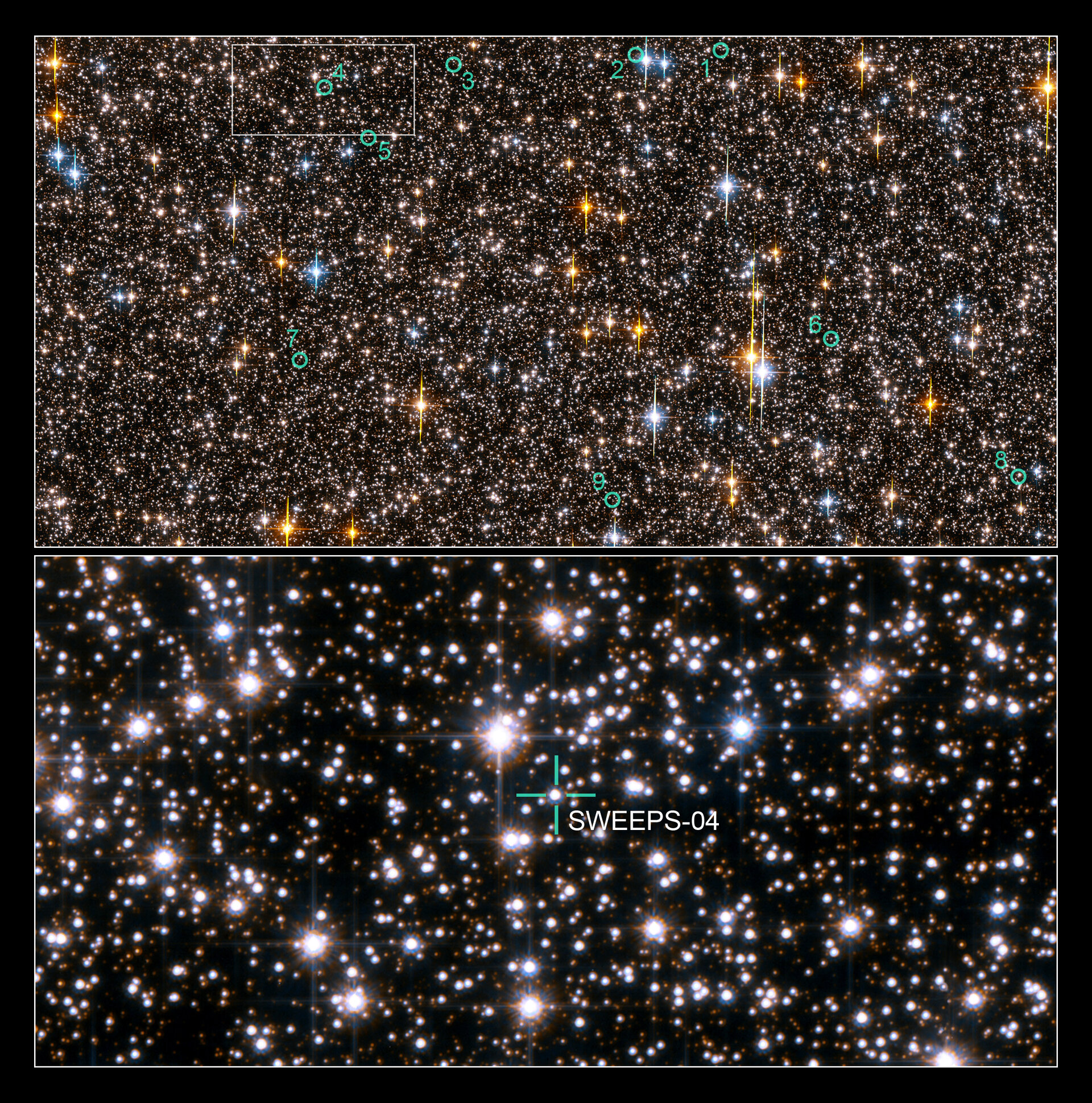 The NASA/ESA Hubble Space Telescope has discovered 16 extrasolar planet candidates that are orbiting a variety of distant stars. In accomplishing this, Hubble looked farther into our Milky Way galaxy than has ever successfully been done before in searching for extrasolar planets.

The Hubble observations reach all the way into the central bulge of our galaxy, 26,000 light-years away, or one-quarter the diameter of the Milky Way’s spiral disk.

This tally is consistent with the number of planets expected to be uncovered from such a distant survey, based on previous exoplanet detections made in our local solar neighbourhood that only encompasses six percent of the Milky Way’s disk.

Extrapolated to the entire galaxy, the Hubble result provides strong evidence for the existence of about 6 billion Jupiter-sized planets in the Milky Way.

Five of the newly discovered planets represent a new extreme type of planet not yet found in any nearby searches. Dubbed Ultra-Short-Period Planets (USPPs), these worlds whirl around their stars in less than a day. The shortest-duration orbit is just 10 hours.

The planet bonanza was uncovered during an international Hubble survey, called the Sagittarius Window Eclipsing Extrasolar Planet Search (SWEEPS). Hubble looked at 180,000 stars in the crowded central bulge of our galaxy. Hubble’s narrow view covered a swath of sky that is no bigger in angular size than 2 percent the area of the full Moon. The results will appear in the 5 October issue of the journal Nature.

"Discovering the very short-period planets was a big surprise," said team leader Kailash Sahu of the Space Telescope Science Institute in Baltimore, USA. "Only the Hubble Space Telescope, with its superb resolution and sensitivity, can look across our galaxy and find planets around faint stars. Our discovery also gives very strong evidence that planets are as abundant in other parts of the galaxy as they are in our solar neighbourhood."

Hubble couldn’t view the 16 newly found planet candidates directly. Instead, astronomers used Hubble’s Advanced Camera for Surveys to search for planets by measuring the slight dimming of a star due to the passage of a planet in front of it. This event is called a transit. The planet would have to be about the size of Jupiter to block enough starlight, about 1 percent to 10 percent, to be measurable by Hubble. These planets are called 'candidates' because astronomers only have mass measurements for two of them.

Nevertheless, following an exhaustive analysis, the team ruled out alternative explanations such as a grazing transit by a stellar companion that could mimic the predicted signature of a true planet. The finding could more than double the number of planets spied with the transit technique.

The planet candidate with the shortest orbital period, named SWEEPS-10, swings around its star in 10 hours. Located only 1.2 million kilometres from its star (roughly three times the distance between the Earth and the Moon), the planet is among the hottest ever detected, with an estimated temperature of about 1650 degrees C. "This star-hugging planet must be at least 1.6 times the mass of Jupiter, otherwise the star’s gravitational muscle would pull the planet apart," said Sahu.

How can a planet survive the scorching temperatures so close to a star? Sahu said that the star’s low temperature allows the planet to exist. "USPPs occur preferentially around normal red dwarf stars that are smaller and cooler than our Sun," Sahu explained. He cites the apparent absence of USPPs around sun-like stars in our local neighbourhood as evidence that they must have evaporated away when they migrated too close in to a hotter star.

There is an alternative reason why Jovian planets around cooler stars may migrate in closer to the star, than for hotter stars. That’s because the circumstellar disk out of which they formed extends closer to a cooler star. Ever since the discovery of the first 'hot Jupiter' in 1995, astronomers have realized that this unusual type of massive planet must have spiralled in close to its parent star from a more distant location where it only could have originally formed. The inner edge of a circumstellar disk halts the migration.

Sahu and his team also found that all of the planet candidates revolve around stars abundant in elements heavier than hydrogen and helium, such as carbon. This bolsters theories that heavy-element-rich stars have the necessary ingredients to form planets.

Planetary transits only occur when the planet’s orbit is viewed nearly edge-on. However, only about 10 percent of hot Jupiters have edge-on orbits that allow the planet to be observed transiting a star. To be successful, transit surveys must view a large number of stars at once. The SWEEPS transit survey covered a rich field of stars in the Sagittarius Window (the term "window" implies a clear view into the Galactic Centre, much of the Galactic Plane is obscured by dust). Hubble monitored 180,000 stars for periodic, brief dimming in a star’s brightness. The starfield was observed over a continuous seven-day period from 23 to 29 February, 2004. To ensure that the dimming was caused by an object orbiting a star, the team used Hubble to detect from 2 to 15 consecutive transits for each of the 16 planet candidates.

Two of the stars in the field are bright enough that the SWEEPS team could make an independent confirmation of a planet's presence by spectroscopically measuring a slight wobble in the star’s motion due to the gravitational pull of an unseen companion. They used the European Southern Observatory's Very Large Telescope, located on Cerro Paranal in Chile, to measure a slight wobble in the star. One of the planetary candidates had a mass below the detection limit of 3.8 Jupiter masses. The other candidate is 9.7 Jupiter masses, which is below the cutoff mass for a brown dwarf (a substellar object that forms like a star but does not shine by nuclear fusion) of 13 Jupiter masses.

The Hubble SWEEPS programme is an important proof-of concept for CNES’s COROT mission, to which ESA participates, scheduled for launch in December 2006 and NASA’s Kepler Mission, scheduled for launch in October 2008. COROT and Kepler will continuously monitor regions of the Milky Way galaxy to detect transiting planets. They will be sensitive enough to detect possibly hundreds of Earth-sized planet candidates in or near the habitable zone around a star. The habitable zone encompasses the distances from a star where liquid water can exist on a planet’s surface. As with the SWEEPS programme, the COROT and Kepler detections will remain candidate planets until they can be independently verified by observations that would provide an independent estimate of planetary masses.