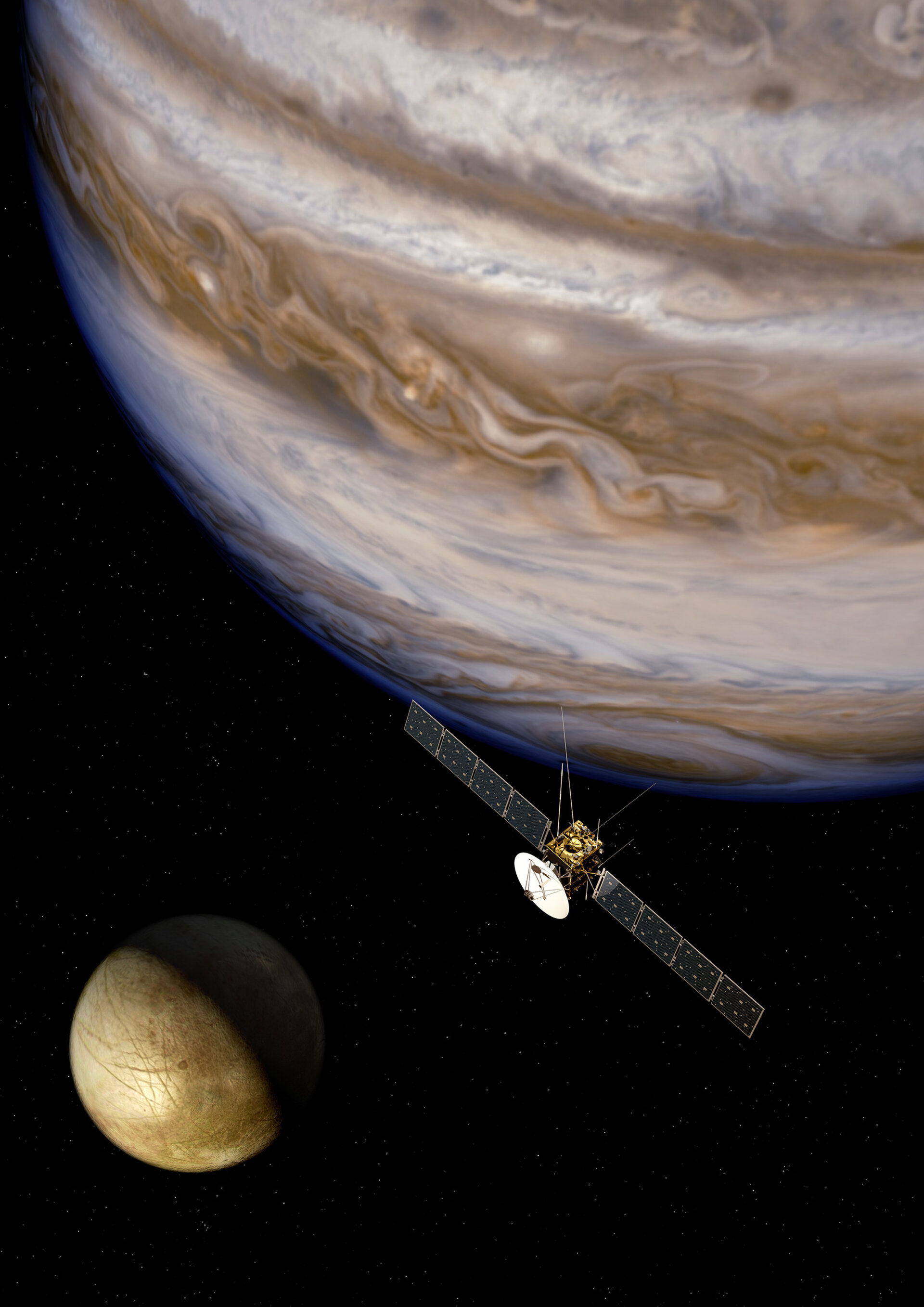 The Jupiter Icy moons Explorer – JUICE – was selected over two other candidates: NGO, the New Gravitational wave Observatory, to hunt for gravitational waves, and ATHENA, the Advanced Telescope for High-Energy Astrophysics.

It will be launched in 2022 from Europe’s spaceport in Kourou, French Guiana, on an Ariane 5, arriving at Jupiter in 2030 to spend at least three years making detailed observations.

With Europa, Ganymede and Callisto all thought to host internal oceans, the mission will study the moons as potential habitats for life, addressing two key themes of Cosmic Vision: what are the conditions for planet formation and the emergence of life, and how does the Solar System work?

JUICE will continuously observe Jupiter’s atmosphere and magnetosphere, and the interaction of the Galilean moons with the gas giant planet.

It will visit Callisto, the most heavily cratered object in the Solar System, and will twice fly by Europa. JUICE will make the first measurements of the thickness of Europa’s icy crust and will identify candidate sites for future in situ exploration.

The spacecraft will finally enter orbit around Ganymede in 2032, where it will study the icy surface and internal structure of the moon, including its subsurface ocean.

Ganymede is the only moon in the Solar System known to generate its own magnetic field, and JUICE will observe the unique magnetic and plasma interactions with Jupiter’s magnetosphere in detail.

“Jupiter is the archetype for the giant planets of the Solar System and for many giant planets being found around other stars,” says Prof. Alvaro Giménez Cañete, ESA’s Director of Science and Robotic Exploration.

“JUICE will give us better insight into how gas giants and their orbiting worlds form, and their potential for hosting life.”

"The selection process has been challenging given the excellent quality of the three mission candidates, and I would like to thank the Space Science Advisory Committee for its hard work and for having carried out this very challenging process in a very rigorous way," says the Chair of ESA’s Science Programme Committee, Dr Richard Bonneville.

Today’s announcement is the culmination of a process started in 2004 when ESA consulted the wider scientific community to set Europe’s goals for space exploration in the coming decade.

The resulting Cosmic Vision 2015-2025 programme identified four scientific aims. What are the conditions for life and planetary formation? How does the Solar System work? What are the fundamental laws of the Universe? How did the Universe begin and what is it made of?

In 2007, a ’Call for Missions’ was issued around these aims and resulted in a number of L-class missions being considered.

“It was a difficult decision to choose one mission from three excellent candidates. All three would produce world-class science and put Europe at the forefront of space research,” says Prof. Giménez Cañete.

“JUICE is a necessary step for the future exploration of our outer Solar System.”

The high scientific value of both NGO and ATHENA was also recognised by the Science Programme Committee in today’s decision, and technology activities are planned to continue, enabling the missions to be considered as candidates for future launch opportunities. A second Call for Large Missions is expected in 2013.