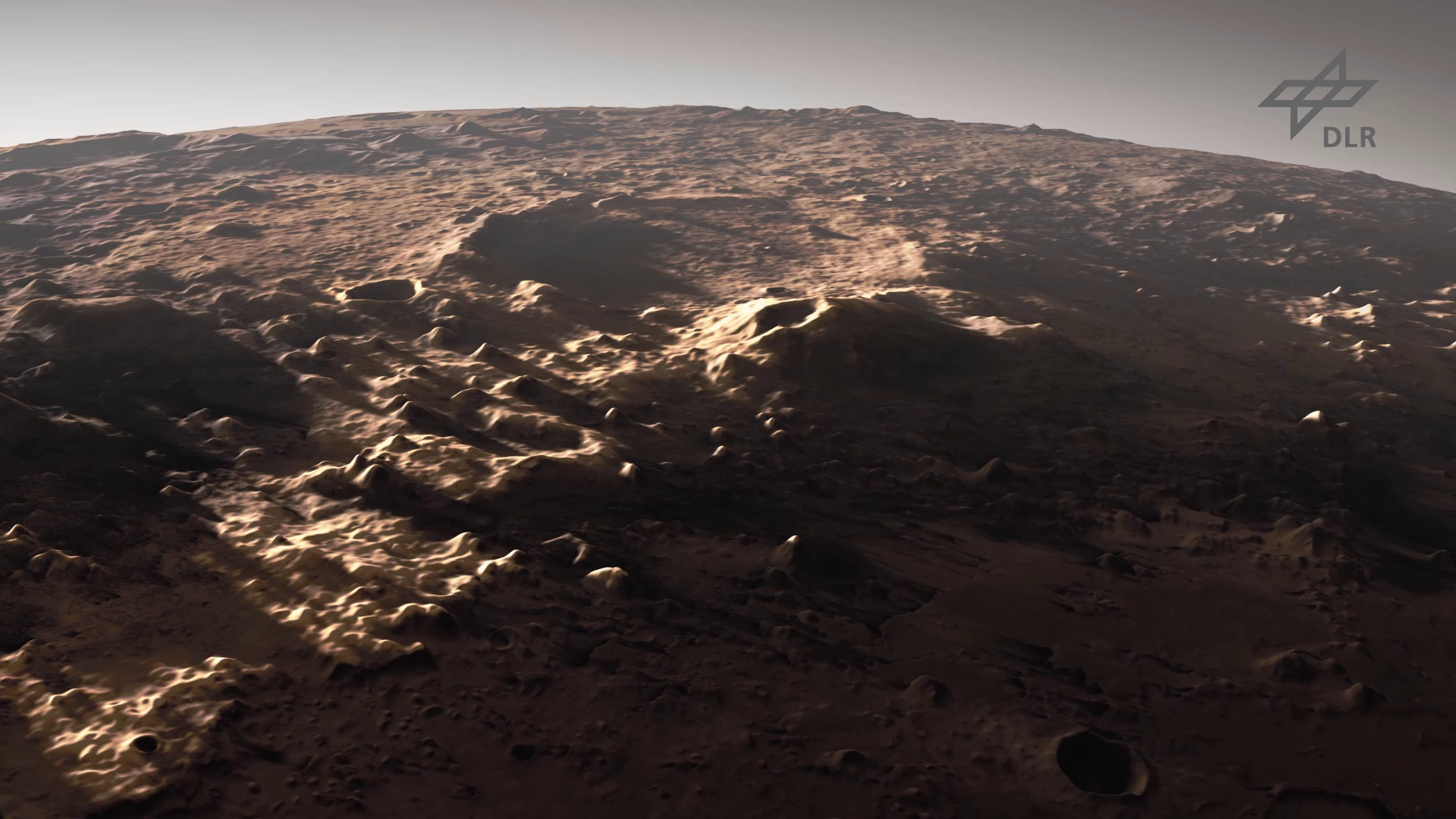 Explore the landing site of NASA’s Perseverance rover and travel to scenic panoramas with this new interactive tool based on ESA Mars Express and NASA Mars Reconnaissance Orbiter data. View on your mobile phone, and the rotation of the scene will follow the movements of your device!

NASA’s Mars 2020 mission with Perseverance rover onboard is scheduled to land in an ancient crater lake on Mars on 18 February 2021. Watch live coverage via NASA here.

This interactive map of the landing site at Jezero Crater and surrounding area allows fast zooming and panning of the available data down to centimeter-scale detail. The basemap can be toggled between a colourised high-resolution image mosaic or a topography map. The sidebar at the left provides additional geometry layers and associated information. By clicking on the marker symbols you will find yourself transported to a virtual 3D scene, with the possibility to view it in a virtual reality environment (VR equipment required).

Hint: while exploring the touchdown point, look up for a fun surprise!

The 49 km Jezero Crater (viewpoint crater centre) once hosted an ancient lake fed by two prominent valleys (viewpoints Naretva and Sava Vallis), with Perseverance targeting a region close to one of the river deltas (viewpoints Delta top and basement). Within the delta deposits, numerous water-bearing minerals have been observed from orbit, indicating that liquid water was once present for an extended period of time, perhaps up to 250 m depth.

The deltas are a prime target to look for ancient biomarkers. Meanwhile an outflow channel (viewpoint Outflow channel) breaks through the eastern rim of Jezero. The presence of both inflow and outflow channels suggest the crater was constantly replenished with fresh water.

The Mountain View viewpoint on top of a larger hill in the southeast offers a perfect vista into the crater. From here, the observer can see that the northern part of the crater floor is sloping and that the northern crater rim is clearly less defined, compared to the flat, smooth crater floor in the south and the much steeper southern crater rim flanks. This appearance originates from the erosion of material in the catchment areas to the north of the crater, which was then transported into the crater basin itself and deposited in the deltas. Also contributing to the asymmetrical topography is the erosion of the northern crater rim, caused by the river valleys breaking through the flank of Jezero.

Read more about the region

A variety of data from ESA’s Mars Express (MEx) and NASA’s Mars Reconnaissance Orbiter (MRO) were utilized for this release. The HRSC HMC30 products produced by the Global Topography and Mosaics Task Group (GTMTG) of the HRSC Science Team serve as a reference dataset all other datasets were registered to. The original HMC30 product tiles can be downloaded here and browsed in an interactive map environment here. A number of higher resolution image data from the Context Camera (CTX) on board MRO were incorporated in the basemap. In total, 33 CTX swaths having an average resolution of 6 m/px were orthorectified and co-registered to the HRSC data by bundle adjustment, using the USGS Integrated Software for Imagers and Spectrometers (ISIS). After this geometric alignment, the CTX images were radiometrically normalised using the HRSC grayscale mosaic as a brightness reference. The colour information was transferred from the 50 m/px HRSC mosaic to the highly resolved CTX data by pan-sharpening. The existing HiRISE image mosaic of an even higher resolution of 0.5 m/px, created by the USGS Astrogeology Science Center in the course of the Terrain Relative Navigation (TRN) project for the rover, has already been aligned very well to the HRSC base dataset. HRSC colour has also been applied to the otherwise grayscale HiRISE dataset using pan-sharpening. The DTM basemap was combined from the HMC30 mosaic tile and the existing HiRISE DTM mosaic from the TRN project as available here.