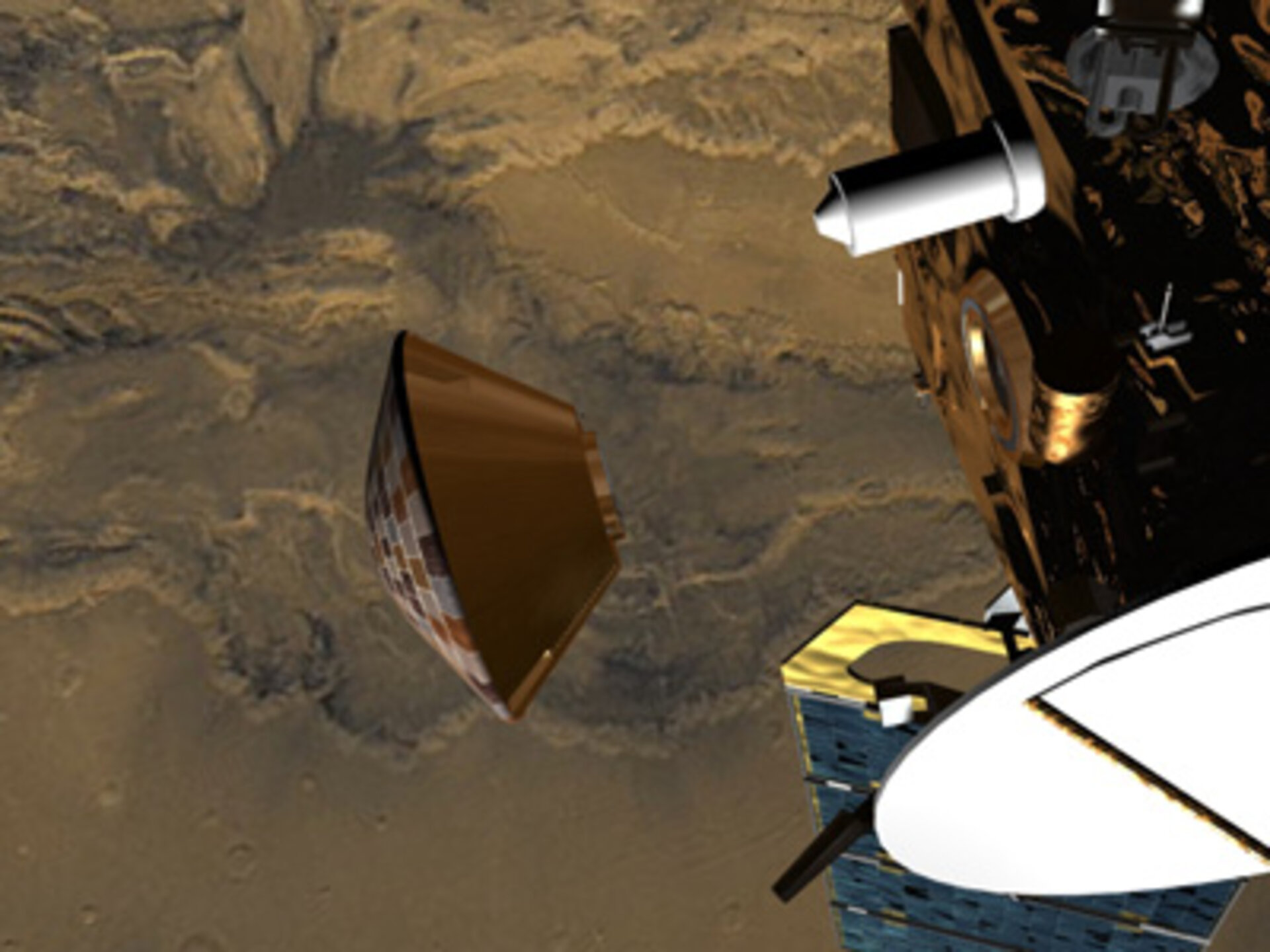 Mars Express, ESA’s first probe to Mars, still has some challenges to face.

The spacecraft has successfully come through its first power test after the gigantic solar flare on 28 October.

Since 17 November the on-board software has been 'frozen' after several updates and the spacecraft is now quietly proceeding to its destination. The next major task, starting on 19 December, will be to safely release the Beagle 2 lander.

To deliver Beagle 2 where planned, Mars Express has been put on a collision course with Mars, since Beagle 2 does not have a propulsion system of its own and must therefore be aimed precisely at its destination.

Intense activity will begin six days before the arrival at Mars on 25 December with the release of Beagle 2. The orbiter will follow Beagle 2 for a while until, three days before arrival at Mars, ground controllers must make it change trajectory to avoid crashing onto the planet.

This will be the first time that an orbiter delivers a lander without its own propulsion onto a planet and attempts orbit insertion immediately afterwards.

Several manoeuvres will follow to set the spacecraft into its final operational orbit. This orbit is a highly elliptical polar orbit, taking Mars Express as close as 260 kilometres from the Martian surface, and out to more than 11 000 kilometres away at its furthest from the planet.

This is another crucial moment, as it is the first time after the launch that the orbiter’s propulsion system comes into action. On top of this, the deployment of the radar booms will take place – one of the most critical instrument activities.

Finally, large, gas-filled bags will inflate to protect the lander as it bounces on the surface. Once Beagle 2 comes to a halt, the bags are ejected and the lander can open up and start operating.

Any one of these operations could go wrong. An incorrect alignment of the lander could mean it burns up in the atmosphere. The parachutes could fail to deploy, plunging Beagle 2 into the surface at great speed. The balloons could become detached, or get punctured, again possibly causing Beagle 2 to crash.

If the lander does not land on the planned spot, then this is less serious. The landing area is not one ‘spot’ but a large ellipse, 300 kilometres long and 100 kilometres wide.

It has been calculated taking into account the density of the Martian atmosphere, the winds and many other factors. So the risk of missing the landing site is very small. If the winds are stronger than calculated, for instance, they may ‘push’ Beagle 2 a little further away, but still within the selected area.

Past missions to Mars have been lost due to a variety of problems, ranging from trivial errors in calculations to system problems. Errors can always happen, but all aspects of the Mars Express mission have been tested as much as possible to be confident that there will be no errors due to trivial mistakes. Mars Express has been developed in a record-breaking time, but there have been no compromises in testing.