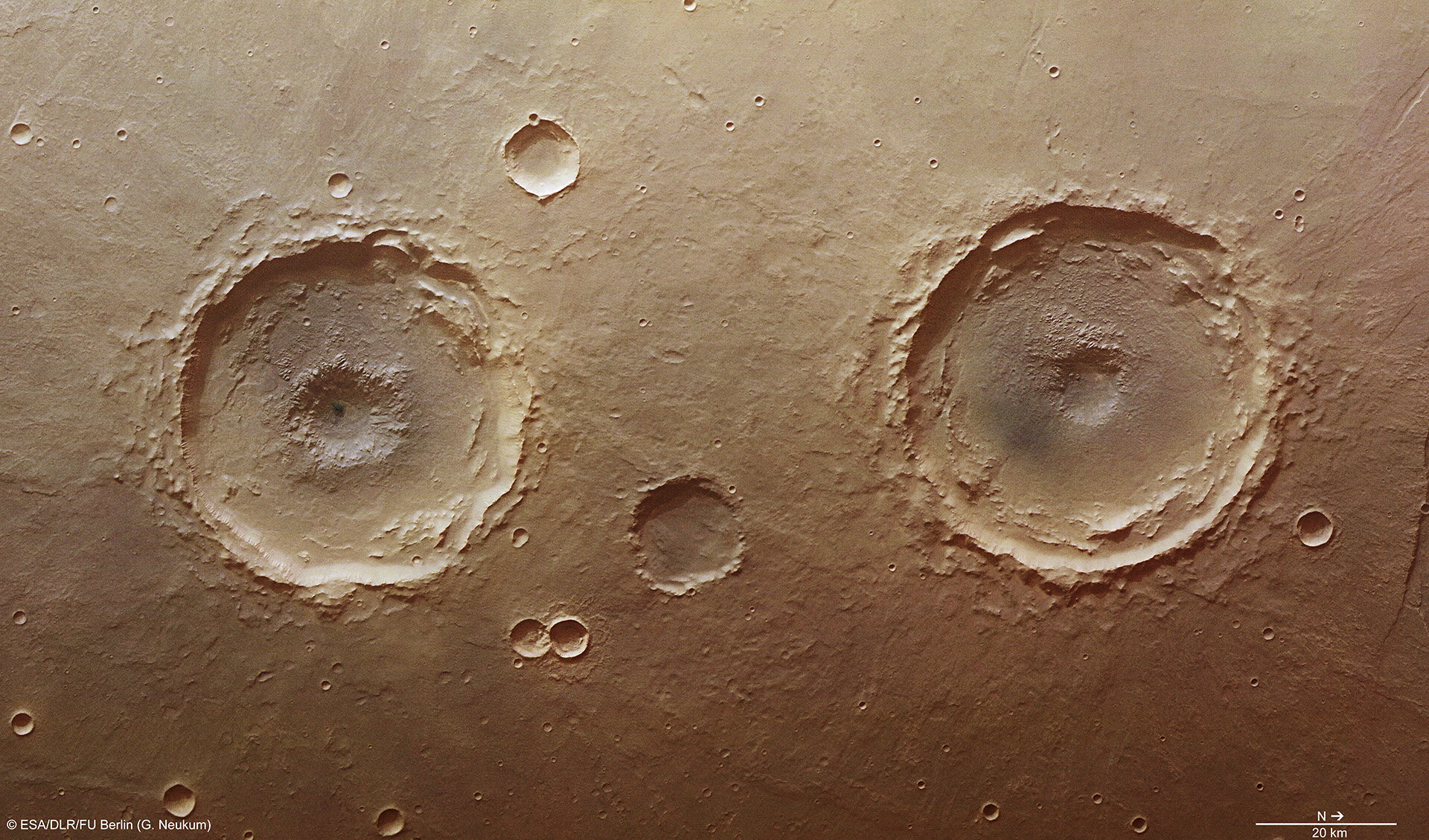 The ‘twin’ craters are in the Thaumasia Planum region, a large plateau that lies immediately to the south of Valles Marineris, the largest canyon in the Solar System.

The northernmost (right) large crater in this scene was officially given the name Arima in early 2012, but the southernmost (left) crater remains unnamed. Both are just over 50 km wide and display intricate interior features.

The southernmost crater is also presented here in a perspective view, revealing its complex characteristics in detail.

Multiple terraces slump from the crater walls onto a flat floor, but perhaps the most striking feature is the central pit, a feature it shares with Arima crater to its north.

Central pit craters are common on Mars, as well as on the icy moons orbiting the giant planets in our Solar System. But how did they form?

When an asteroid hits the rocky surface of a planet, both it and the surface are compressed to high densities. Immediately after the impact, the compressed regions rapidly depressurise, exploding violently.

One idea for central pit formation is that when rock or ice melted during the impact drains away through fractures beneath the crater, it leaves a pit.

Another theory is that subsurface ice is rapidly heated, vapourising in an explosion. As a result, the rocky surface is excavated forming an explosive pit surrounded by rocky debris. The pit is in the centre of the main crater, where most of the impact energy was deposited.

Though the large craters in this scene have similar diameters, their central pits are rather different in size and depth, as is clearly evident in the topographical map. Compared to the Arima crater, perhaps more subsurface ice was present and more readily vapourised in the southern crater, punching through slightly thinner crust to leave a larger pit.

Many neighbouring small impact craters also show evidence for subsurface water or ice at the time of impact as evidenced by their ‘rampart’ ejecta blankets.

Ejecta blankets are debris deposits surrounding the crater, excavated from inside the crater during its formation. They have petal-like lobes around their edges: these result from liquid water bound up in the ejected material, allowing it to flow along the surface and giving it a fluid appearance.

Impact craters like these can thus provide windows into the past of a planet’s surface. In this case, they provide evidence for the Thaumasia Planum region having once hosted plentiful subsurface water or ice that was liberated during impact events both small and large.