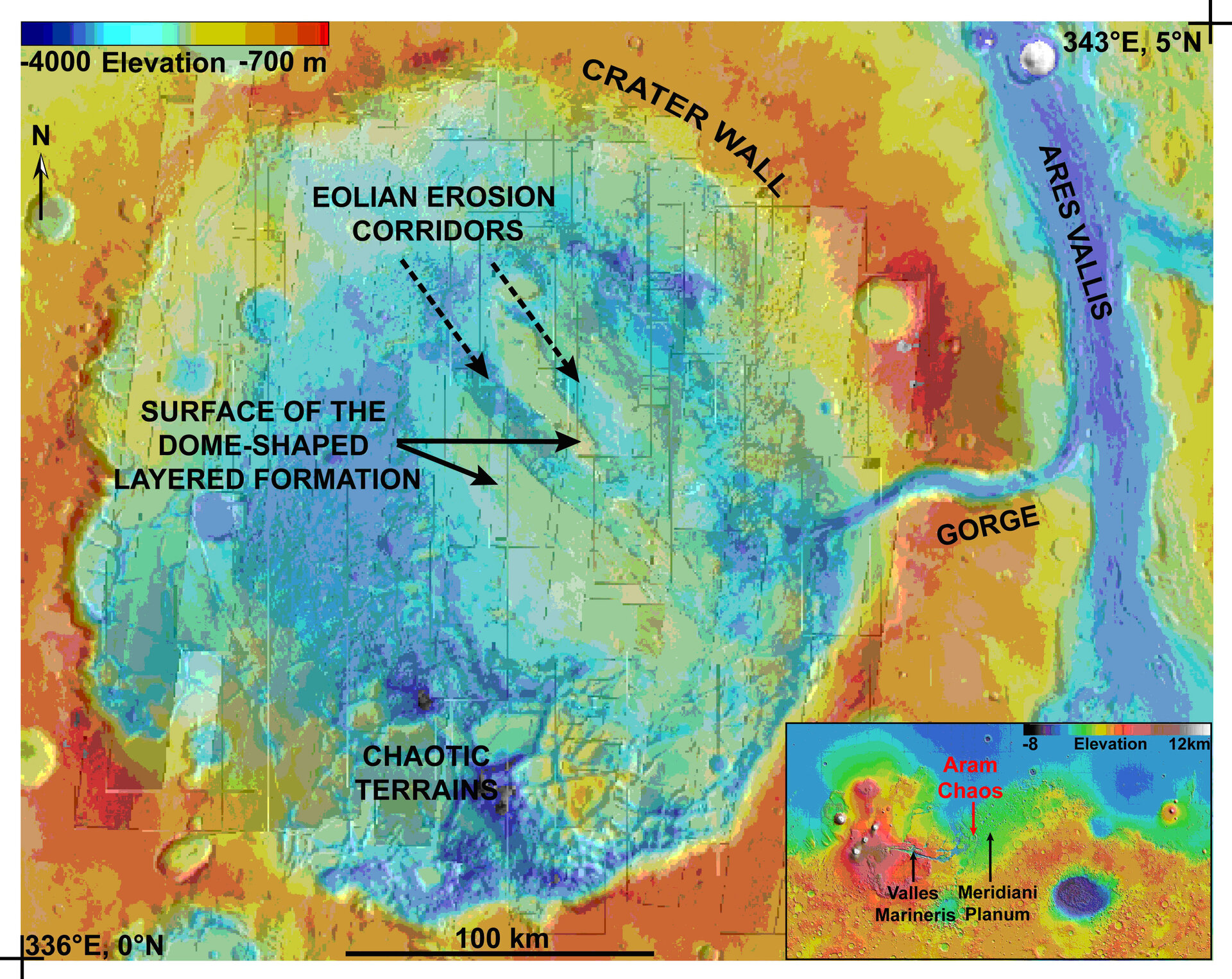 Mars Express has uncovered geological evidence suggesting that some depositional process, revealed by erosion, has been at work on large scales in the equatorial regions of the planet. If so, this would provide another jigsaw piece to be fitted into the emerging picture of Mars’ past climate.

The evidence comes from the mineralogical composition of the Aram Chaos region, a crater 280 km in diameter lying almost directly on the martian equator. Data from Mars Express’ OMEGA instrument, the Visible and Infrared Mineralogical Mapping Spectrometer, has revealed that this region shows a significant amount of sulphates and ferric oxides. On Earth, ferric oxide is more commonly known as rust.

Observations from Mars Express show that the bright red dust covering much of the planet is enriched in ferric oxides. Yet in the dark deposits of Aram Chaos, there is a four-fold increase in the spectral signature of ferric oxides, revealing a specific concentration mechanism. Ferric oxides are generally found with sulphates but, in this case, the lighter sulphates have been blown away, leaving the ferric oxides exposed.

“They have accumulated in dark deposits at the bottom of sulphate cliffs,” says Stéphane Le Mouélic, Université de Nantes, a member of the team who performed the investigation. This suggests that the ferric oxides have been uncovered by erosion before dropping to the base of the cliffs. The dunes in this region are also enriched in ferric oxides.

Perhaps significantly, this phenomenon is not unique to the Aram Chaos region. The NASA Opportunity rover discovered ferric oxide deposits in Meridiani Planum, about 1000 km away. The scientists called the deposits ‘blueberries’, because of their spherical shape. Valles Marineris, 3000 km away, also shows similar deposits. So Mars Express’ detection of ferric oxides in Aram Chaos links together widely separated areas of Mars.

There may even be other regions that have witnessed the same accumulation process but now lie hidden from Mars Express’ view. “OMEGA is sensitive to the first hundreds of microns of the surface. So, a layer of Martian dust just one millimetre thick will hide the signature from us,” says Marion Massé, Université de Nantes, lead author on the paper describing these results. Fortunately, in many regions of Mars, such as Aram Chaos, wind erosion has blown the dust cover away, leaving bulk rocks exposed.

Although the true extent and nature of the accumulation process of sulphates and ferric oxides remain elusive, the team are now investigating possible hypotheses that could have caused it in the first place. At this stage, they are ruling nothing out. It could be anything from atmospheric precipitation such as rain or snow, to volcanic ashes or glacial deposits.