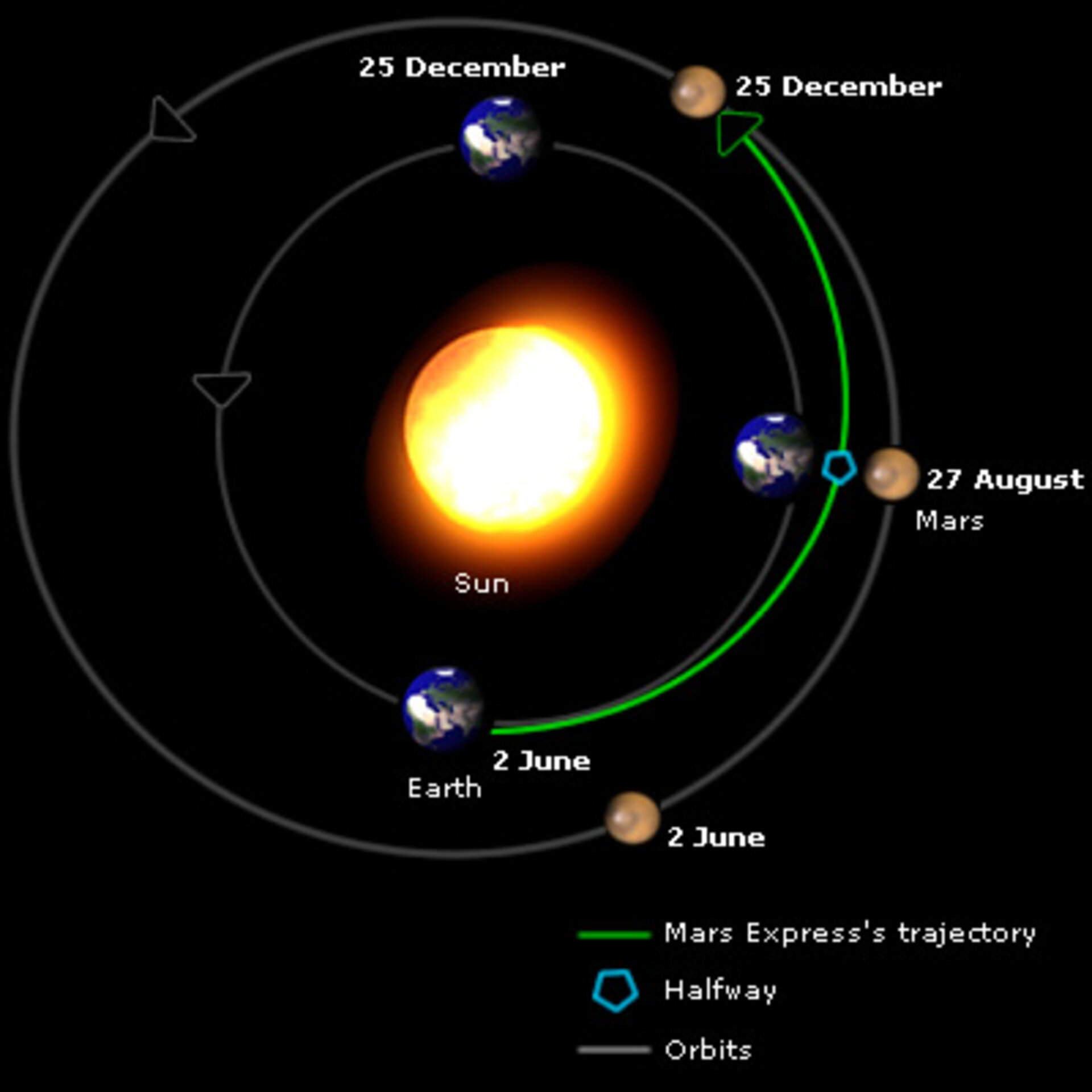 Mars Express set off on 2 June 2003. At this time of year the positions of the two planets made for the shortest possible route, a condition that occurs once every 26 months.

The intrepid spacecraft began its six-month journey from the Baikonur launch site in Kazakhstan on board a Russian Soyuz/Fregat launcher.

Having escaped the Earth's pull, Mars Express was sent on course for the Red Planet, cruising at a velocity of 10 800 kilometres and hour, relative to Earth. Six days before arrival on 25 December 2003, Mars Express ejected the Beagle 2 lander which was to have made its own way to the correct landing site on the surface.

The orbiter successfully entered Martian orbit on 25 December. First it manoeuvred into a highly elliptical capture orbit from which it moved into its operational near polar orbit later in January 2004.

Data collected by the orbiter instruments is transmitted to an ESA ground station at New Norcia near Perth, Australia, at a rate of up to 230 kbps. Between 0.5 and 5 Gbits of scientific data is downlinked from the spacecraft to Earth every day.

From Perth they are sent on to the European Space Operations Centre (ESOC) in Darmstadt, Germany, which adds spacecraft attitude and orbital data, and then sends the data to the instrument Principal Investigators (PI) for further processing and analysis.

After about six months, the processed data are placed in a publicly available Mars Express science data archive.

Information on the health and position of the spacecraft is included in a separate data stream. The Mars Express operations team at ESOC use this information, together with the forthcoming operational needs of the instruments, to work out new commands to instruct the spacecraft how to behave over the coming months. The new commands are sent to the spacecraft via the Perth ground station.

Mars Express completed its nominal mission lifetime after being in orbit around the Red Planet for one Martian year, 687 Earth days, and is still operating today.

Beagle 2 was planned to descend to the surface, entering the atmosphere at more than 20 000 kilometres per hour. A heat-resistant shield protected it as friction with the upper atmosphere slowed it down. When its speed had fallen to about 1600 kilometres per hour, a parachute would have deployed to slow it further. Finally, large gas-filled bags would have inflated to protect it as it bounced to a halt on the chosen landing site.

Then the gas bags would have been jettisoned, its clam-like outer casing sprung open, its solar panels unfurled, the robotic arm deployed and its cameras started to take in the view.

Unfortunately, the Beagle 2 lander was declared lost after it failed to make contact with orbiting spacecraft and Earth-based radio telescopes. However, in 2015, the lost lander was found in images taken by NASA’s Mars Reconnaissance Orbiter. The images show the lander in what appears to be a partially deployed configuration, which explains why no signals were ever received from the lander: full deployment of all solar panels was needed to expose the radio antenna to transmit data and receive commands from Earth.

The images also confirmed that Beagle 2 arrived on Mars within the expected landing area in Isidis Planitia, at a distance of about 5 km from its centre.