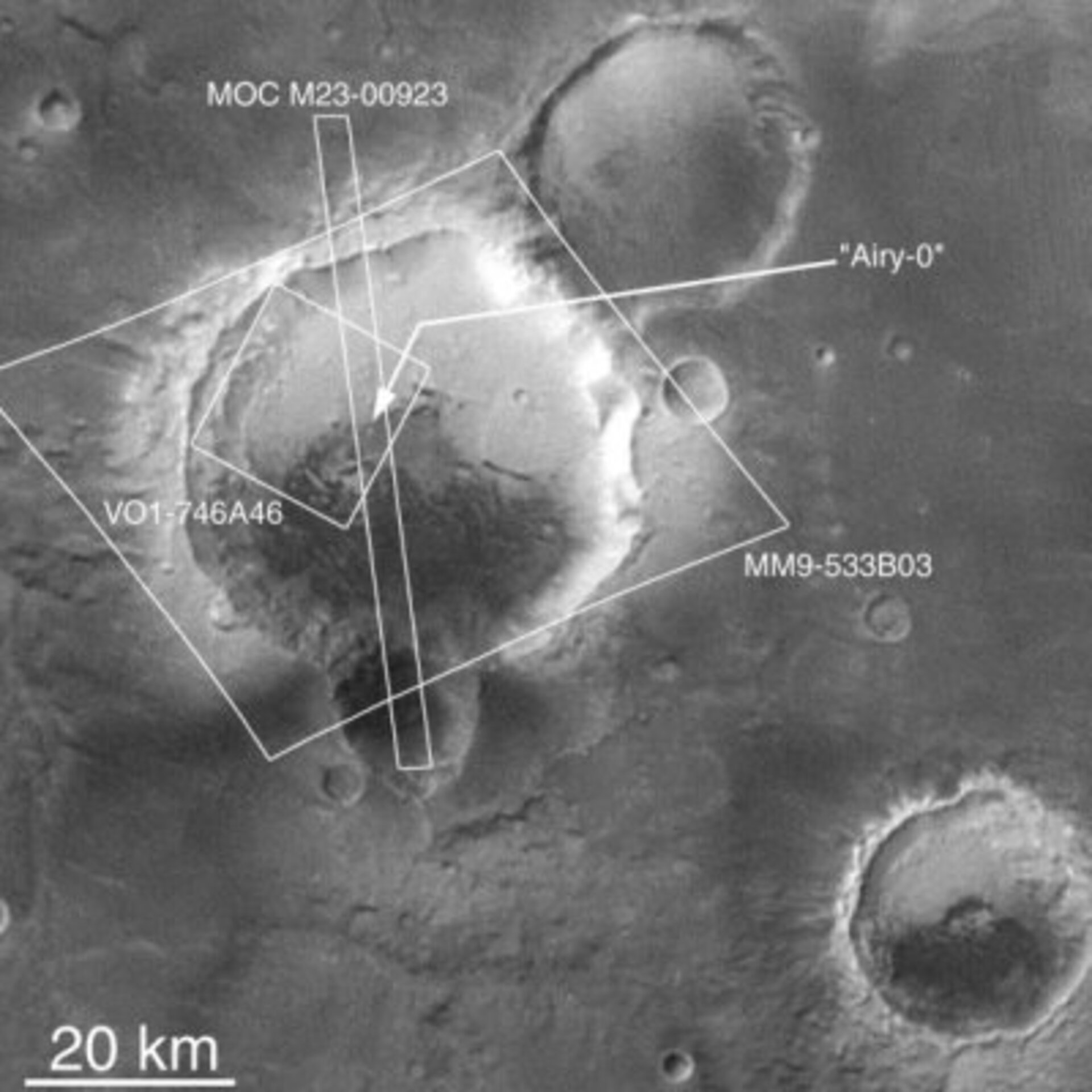 On Earth, the longitude of the Royal Observatory in Greenwich, England, is defined as the 'prime meridian,' or zero degrees longitude. Locations on Earth are measured in degrees east or west from this position, but where is the equivalent position on Mars?

Earth's prime meridian was defined by international agreement in 1884 as the position of the large 'transit circle', a telescope in the Royal Observatory's Meridian Building. The transit circle was built by Sir George Biddell Airy, the 7th Astronomer Royal, in 1850.

For Mars, the prime meridian was first defined by the German astronomers W. Beer and J. H. Mädler in 1830-32. They used a small circular feature on the surface, which they called 'A’, as a reference point to determine the rotation period of the planet.

The Italian astronomer G. Schiaparelli used this feature as the zero point of longitude in his 1877 map of Mars. It was subsequently named Sinus Meridiani ('Middle Bay') by French astronomer Camille Flammarion.

A crater in the Sinus Meridiani was later called Airy, named to commemorate the builder of the Greenwich transit. When the US Mariner 9 spacecraft mapped the planet at about 1 kilometre resolution in 1972, a more precise definition was needed.

Merton Davies of the RAND Corporation was analysing surface features and designated a 0.5-kilometre-wide crater, subsequently named 'Airy-0' (within the larger crater Airy) as the zero point.

This crater was imaged once by Mariner 9 and once by the Viking 1 orbiter in 1978, and these two images were the basis of the Martian longitude system for the rest of the 20th century.

The US Mars Global Surveyor (MGS) attempted to take a picture of Airy-0 on every close overflight it made since the beginning of its mapping mission. This shows how difficult it is to hit such a small target: nine attempts were required, and the spacecraft did not pass directly over Airy-0 until almost the end of the MGS primary mission in January 2001.

Originally, a system with ‘planetographic’ latitude and longitude increasing to the west was developed to be used with the Viking observations. The US Geological Survey and other organisations then adopted a system with ‘planetocentric’ latitude and longitude increasing to the east for making future Mars maps and imagery. Both systems were approved for use on Mars by the International Astronomical Union in 2000.

Most maps produced before 2002 use the earlier co-ordinates system, but now the majority of Mars missions and instrument teams have now adopted the latter system defined for Mars, namely the planetocentric latitude and east longitude system. These definitions have been widely adopted by NASA and ESA missions and other users of planetary data and are likely to remain in use for a decade or more.

The articles featuring the latest Mars images published on the ESA Mars Express web site quote positions given in this latest system, with longitude ranging from 0-360 degrees East. This is different to Earth, where we give longitudes as 0-180 degrees, East or West.