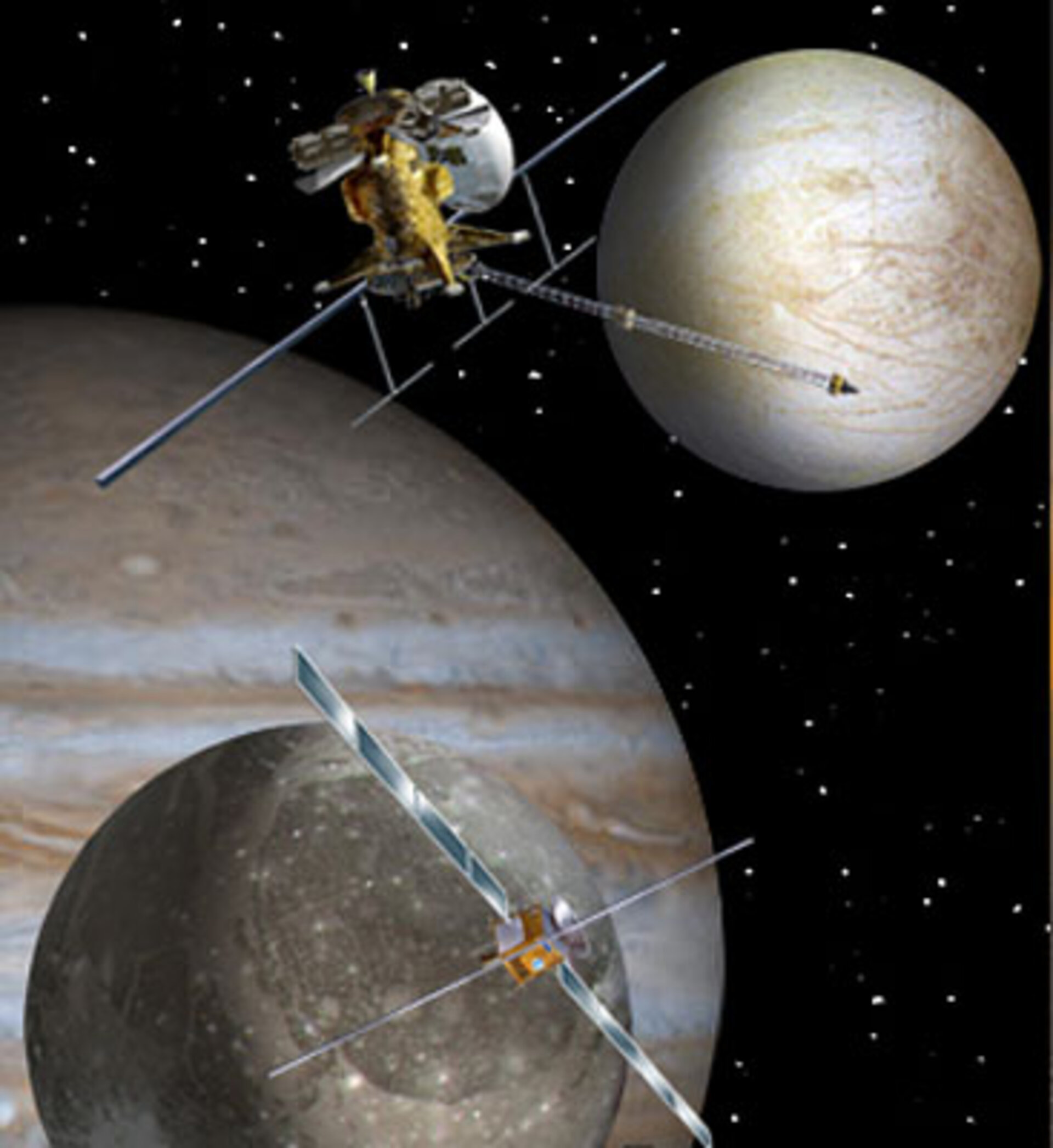 At a meeting in Washington last week, NASA and ESA officials decided to first pursue a mission to study Jupiter and its four largest moons, and plan for another mission to visit Saturn’s largest moon, Titan, and Enceladus.

The proposed projects are grand endeavours that set the stage for future planetary science research. These outer-planet flagship missions could eventually answer questions about how our Solar System formed and whether habitable conditions exist elsewhere in the Solar System.

The missions, called the Europa Jupiter System Mission and the Titan Saturn System Mission, are the result of the merger of separate NASA and ESA mission concepts. NASA originally studied four mission concepts during 2007, which were narrowed down to two proposals in 2008. One finalist was the Europa orbiter to explore this icy moon of Jupiter and its subsurface water ocean. The other was a Titan orbiter to revisit Saturn’s moon.

NASA and ESA engineers and scientists carefully studied these missions in preparation for last week’s meeting. Based on studies and stringent independent assessment reviews, the US Europa Jupiter System Mission, called Laplace in Europe, was the technically more feasible to implement first. However, ESA’s Solar System Working Group concluded that the scientific merits of both missions could not be separated. The group declared, and NASA agreed, that both missions should move forward for further study and implementation.

“The decision means a win, win situation for all parties involved,” said Ed Weiler, associate administrator for NASA's Science Mission Directorate in Washington. “Although the Jupiter system mission has been chosen to proceed to an earlier flight opportunity, a Saturn system mission clearly remains a high priority for the science community.”

Both agencies will need to undertake several more steps and detailed studies before officially moving forward.

“This joint endeavour is a wonderful new exploration challenge and will be a landmark of 21st Century planetary science,” said David Southwood, ESA Director of Science and Robotic Exploration. “What I am especially sure of is that the cooperation across the Atlantic that we have had so far and we see in the future, between America and Europe, NASA and ESA, and in our respective science communities is absolutely right. Let’s get to work.”

The Europa Jupiter System Mission will use two robotic orbiters to conduct unprecedented detailed studies of the giant gaseous planet Jupiter and its moons Io, Europa, Ganymede and Callisto. NASA will build one spacecraft, initially named Jupiter Europa Orbiter. ESA will build the other spacecraft, initially named Jupiter Ganymede Orbiter. The two spacecraft are scheduled to launch in 2020 on two separate launch vehicles from different launch sites. They will reach the Jupiter system in 2026 and spend at least three years conducting research.

Europa, with its putative ocean, is a unique target to study habitability around the gas giant. Ganymede, the largest moon in the Solar System, is the only moon known to have its own internally-generated magnetic field and is also suspected to have a deep undersurface water ocean. Scientists long have sought to understand the causes of the magnetic field. Io, the most volcanically active body in the Solar System, and Callisto, whose surface is heavily cratered and ancient, providing a record of events from the early history of the Solar System, are also key targets of the Jupiter System Mission.

The two orbiters will spend nearly a year orbiting Europa and Ganymede, respectively. They will synergically address the science of the Jupiter system to better understand the formation and evolution of the Jovian system.

The Titan Saturn System Mission would consist of a NASA orbiter and an ESA lander and research balloon. The complex mission poses several technical challenges requiring significant study and technology development. NASA will continue to study and develop those technologies. The National Academy in Washington is beginning to piece together the roadmap for new NASA planetary missions to begin after 2013. On the European side, interested scientists will have to re-submit the Titan mission at the next opportunity for mission proposals in the Cosmic Vision programme.

ESA’s Directorate of Science and Robotic Exploration will manage the European contribution to the Jupiter mission. NASA's Jet Propulsion Laboratory in Pasadena, California, will manage NASA's contributions to the projects for NASA's Science Mission Directorate in Washington.