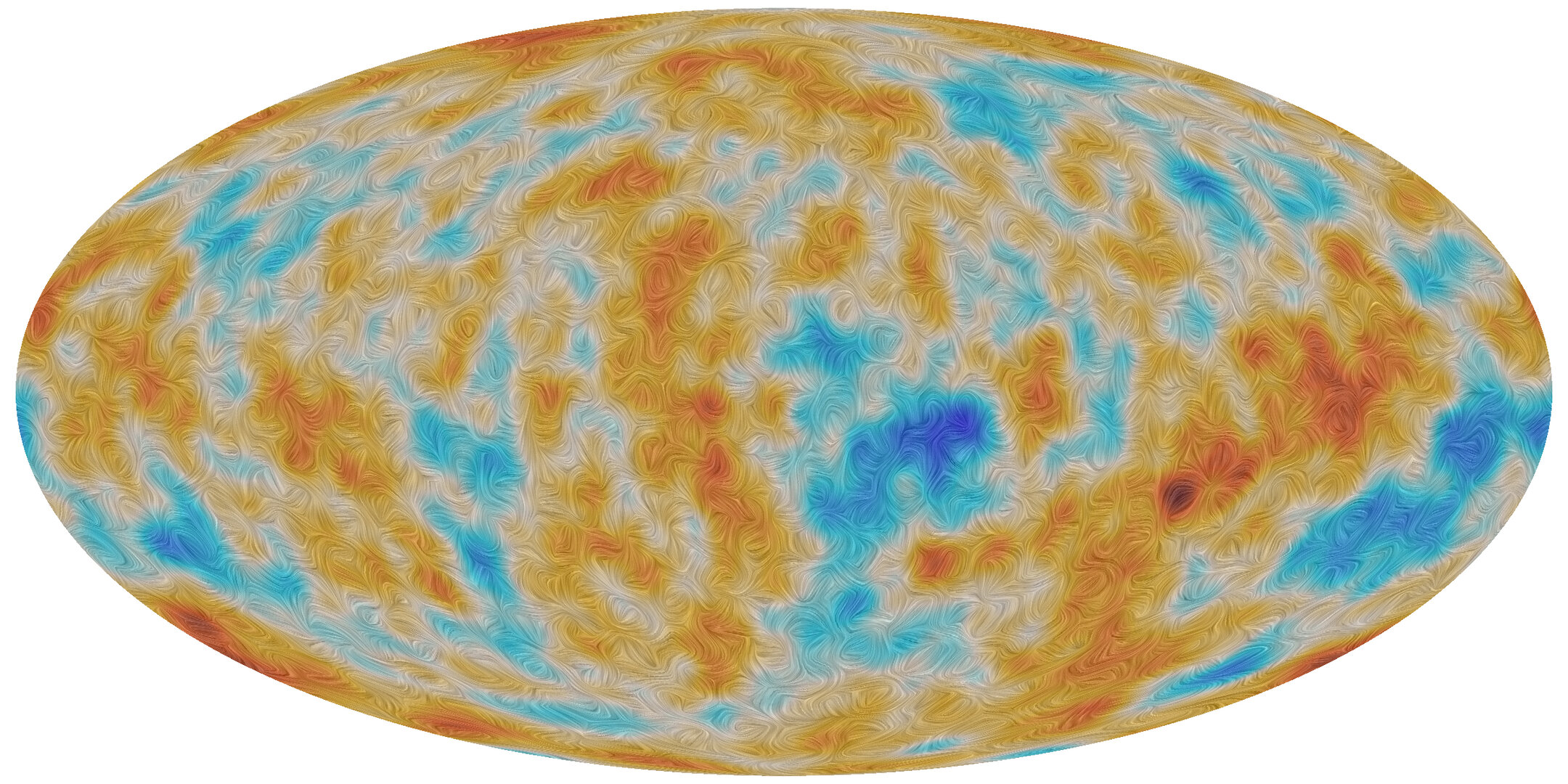 New maps from ESA’s Planck satellite uncover the ‘polarised’ light from the early Universe across the entire sky, revealing that the first stars formed much later than previously thought.

The history of our Universe is a 13.8 billion-year tale that scientists endeavour to read by studying the planets, asteroids, comets and other objects in our Solar System, and gathering light emitted by distant stars, galaxies and the matter spread between them.

A major source of information used to piece together this story is the Cosmic Microwave Background, or CMB, the fossil light resulting from a time when the Universe was hot and dense, only 380 000 years after the Big Bang.

Thanks to the expansion of the Universe, we see this light today covering the whole sky at microwave wavelengths.

Between 2009 and 2013, Planck surveyed the sky to study this ancient light in unprecedented detail. Tiny differences in the background’s temperature trace regions of slightly different density in the early cosmos, representing the seeds of all future structure, the stars and galaxies of today.

Scientists from the Planck collaboration have published the results from the analysis of these data in a large number of scientific papers over the past two years, confirming the standard cosmological picture of our Universe with ever greater accuracy.

“But there is more: the CMB carries additional clues about our cosmic history that are encoded in its ‘polarisation’,” explains Jan Tauber, ESA’s Planck project scientist.

“Planck has measured this signal for the first time at high resolution over the entire sky, producing the unique maps released today.”

Light is polarised when it vibrates in a preferred direction, something that may arise as a result of photons – the particles of light – bouncing off other particles. This is exactly what happened when the CMB originated in the early Universe.

Initially, photons were trapped in a hot, dense soup of particles that, by the time the Universe was a few seconds old, consisted mainly of electrons, protons and neutrinos. Owing to the high density, electrons and photons collided with one another so frequently that light could not travel any significant distant before bumping into another electron, making the early Universe extremely ‘foggy’.

Slowly but surely, as the cosmos expanded and cooled, photons and the other particles grew farther apart, and collisions became less frequent.

This had two consequences: electrons and protons could finally combine and form neutral atoms without them being torn apart again by an incoming photon, and photons had enough room to travel, being no longer trapped in the cosmic fog.

Once freed from the fog, the light was set on its cosmic journey that would take it all the way to the present day, where telescopes like Planck detect it as the CMB. But the light also retains a memory of its last encounter with the electrons, captured in its polarisation.

“The polarisation of the CMB also shows minuscule fluctuations from one place to another across the sky: like the temperature fluctuations, these reflect the state of the cosmos at the time when light and matter parted company,” says François Bouchet of the Institut d’Astrophysique de Paris, France.

“This provides a powerful tool to estimate in a new and independent way parameters such as the age of the Universe, its rate of expansion and its essential composition of normal matter, dark matter and dark energy.”

Planck’s polarisation data confirm the details of the standard cosmological picture determined from its measurement of the CMB temperature fluctuations, but add an important new answer to a fundamental question: when were the first stars born?

“After the CMB was released, the Universe was still very different from the one we live in today, and it took a long time until the first stars were able to form,” explains Marco Bersanelli of Università degli Studi di Milano, Italy.

“Planck’s observations of the CMB polarisation now tell us that these ‘Dark Ages’ ended some 550 million years after the Big Bang – more than 100 million years later than previously thought.

“While these 100 million years may seem negligible compared to the Universe’s age of almost 14 billion years, they make a significant difference when it comes to the formation of the first stars.”

The Dark Ages ended as the first stars began to shine. And as their light interacted with gas in the Universe, more and more of the atoms were turned back into their constituent particles: electrons and protons.

This key phase in the history of the cosmos is known as the ‘epoch of reionisation’.

The newly liberated electrons were once again able to collide with the light from the CMB, albeit much less frequently now that the Universe had significantly expanded. Nevertheless, just as they had 380 000 years after the Big Bang, these encounters between electrons and photons left a tell-tale imprint on the polarisation of the CMB.

“From our measurements of the most distant galaxies and quasars, we know that the process of reionisation was complete by the time that the Universe was about 900 million years old,” says George Efstathiou of the University of Cambridge, UK.

“But, at the moment, it is only with the CMB data that we can learn when this process began.”

Planck’s new results are critical, because previous studies of the CMB polarisation seemed to point towards an earlier dawn of the first stars, placing the beginning of reionisation about 450 million years after the Big Bang.

This posed a problem. Very deep images of the sky from the NASA–ESA Hubble Space Telescope have provided a census of the earliest known galaxies in the Universe, which started forming perhaps 300–400 million years after the Big Bang.

However, these would not have been powerful enough to succeed at ending the Dark Ages within 450 million years.

“In that case, we would have needed additional, more exotic sources of energy to explain the history of reionisation,” says Professor Efstathiou.

The new evidence from Planck significantly reduces the problem, indicating that reionisation started later than previously believed, and that the earliest stars and galaxies alone might have been enough to drive it.

This later end of the Dark Ages also implies that it might be easier to detect the very first generation of galaxies with the next generation of observatories, including the James Webb Space Telescope.

But the first stars are definitely not the limit. With the new Planck data released today, scientists are also studying the polarisation of foreground emission from gas and dust in the Milky Way to analyse the structure of the Galactic magnetic field.

The data have also enabled new important insights into the early cosmos and its components, including the intriguing dark matter and the elusive neutrinos, as described in papers also released today.

The Planck data have delved into the even earlier history of the cosmos, all the way to inflation – the brief era of accelerated expansion that the Universe underwent when it was a tiny fraction of a second old. As the ultimate probe of this epoch, astronomers are looking for a signature of gravitational waves triggered by inflation and later imprinted on the polarisation of the CMB.

No direct detection of this signal has yet been achieved, as reported last week. However, when combining the newest all-sky Planck data with those latest results, the limits on the amount of primordial gravitational waves are pushed even further down to achieve the best upper limits yet.

“These are only a few highlights from the scrutiny of Planck's observations of the CMB polarisation, which is revealing the sky and the Universe in a brand new way,” says Jan Tauber.

“This is an incredibly rich data set and the harvest of discoveries has just begun.”

A series of scientific papers describing the new results was published on 5 February and it can be downloaded here.

The new results from Planck are based on the complete surveys of the entire sky, performed between 2009 and 2013. New data, including temperature maps of the CMB at all nine frequencies observed by Planck and polarisation maps at four frequencies (30, 44, 70 and 353 GHz), are also released today.

The three principal scientific leaders of the Planck mission, Nazzareno Mandolesi, Jean-Loup Puget and Jan Tauber, were recently awarded the 2015 EPS Edison Volta Prize for "directing the development of the Planck payload and the analysis of its data, resulting in the refinement of our knowledge of the temperature fluctuations in the Cosmic Microwave Background as a vastly improved tool for doing precision cosmology at unprecedented levels of accuracy, and consolidating our understanding of the very early universe."

Launched in 2009, Planck was designed to map the sky in nine frequencies using two state-of-the-art instruments: the Low Frequency Instrument (LFI), which includes three frequency bands in the range 30–70 GHz, and the High Frequency Instrument (HFI), which includes six frequency bands in the range 100–857 GHz.

HFI completed its survey in January 2012, while LFI continued to make science observations until 3 October 2013, before being switched off on 19 October 2013. Seven of Planck's nine frequency channels were equipped with polarisation-sensitive detectors.

The Planck Scientific Collaboration consists of all the scientists who have contributed to the development of the mission, and who participate in the scientific exploitation of the data during the proprietary period.

These scientists are members of one or more of four consortia: the LFI Consortium, the HFI Consortium, the DK-Planck Consortium, and ESA’s Planck Science Office. The two European-led Planck Data Processing Centres are located in Paris, France and Trieste, Italy.