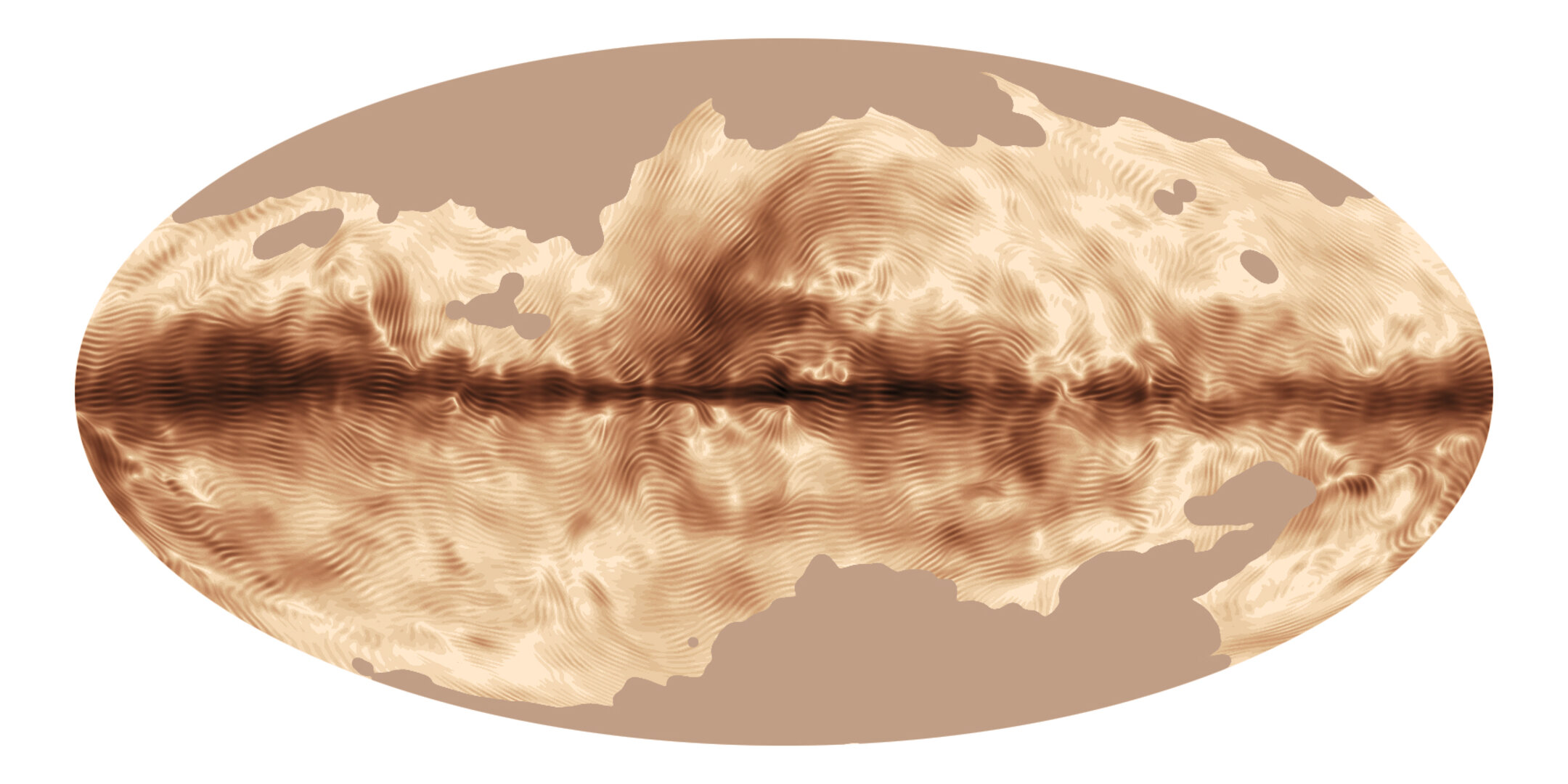 Our Galaxy’s magnetic field is revealed in a new image from ESA’s Planck satellite. This image was compiled from the first all-sky observations of ‘polarised’ light emitted by interstellar dust in the Milky Way.

Light is a very familiar form of energy and yet some of its properties are all but hidden to everyday human experience. One of these – polarisation – carries a wealth of information about what happened along a light ray’s path, and can be exploited by astronomers.

Light can be described as a series of waves of electric and magnetic fields that vibrate in directions that are at right angles to each other and to their direction of travel.

Usually, these fields can vibrate at all orientations. However, if they happen to vibrate preferentially in certain directions, we say the light is ‘polarised’. This can happen, for example, when light bounces off a reflective surface like a mirror or the sea. Special filters can be used to absorb this polarised light, which is how polarised sunglasses eliminate glare.

In space, the light emitted by stars, gas and dust can also be polarised in various ways. By measuring the amount of polarisation in this light, astronomers can study the physical processes that caused the polarisation.

In particular, polarisation may reveal the existence and properties of magnetic fields in the medium light has travelled through.

The map presented here was obtained using detectors on Planck that acted as the astronomical equivalent of polarised sunglasses. Swirls, loops and arches in this new image trace the structure of the magnetic field in our home galaxy, the Milky Way.

In addition to its hundreds of billions of stars, our Galaxy is filled with a mixture of gas and dust, the raw material from which stars are born. Even though the tiny dust grains are very cold, they do emit light but at very long wavelengths – from the infrared to the microwave domain. If the grains are not symmetrical, more of that light comes out vibrating parallel to the longest axis of the grain, making the light polarised.

If the orientations of a whole cloud of dust grains were random, no net polarisation would be seen. However, cosmic dust grains are almost always spinning rapidly, tens of millions of times per second, due to collisions with photons and rapidly moving atoms.

Then, because interstellar clouds in the Milky Way are threaded by magnetic fields, the spinning dust grains become aligned preferentially with their long axis perpendicular to the direction of the magnetic field. As a result, there is a net polarisation in the emitted light, which can then be measured.

In this way, astronomers can use polarised light from dust grains to study the structure of the Galactic magnetic field and, in particular, the orientation of the field lines projected on the plane of the sky.

In the new Planck image, darker regions correspond to stronger polarised emission, and the striations indicate the direction of the magnetic field projected on the plane of the sky. Since the magnetic field of the Milky Way has a 3D structure, the net orientation is difficult to interpret if the field lines are highly disorganised along the line of sight, like looking through a tangled ball of string and trying to perceive some net alignment.

However, the Planck image shows that there is large-scale organisation in some parts of the Galactic magnetic field.

The dark band running horizontally across the centre corresponds to the Galactic Plane. Here, the polarisation reveals a regular pattern on large angular scales, which is due to the magnetic field lines being predominantly parallel to the plane of the Milky Way.

The data also reveal variations of the polarisation direction within nearby clouds of gas and dust. This can be seen in the tangled features above and below the plane, where the local magnetic field is particularly disorganised.

Planck’s Galactic polarisation data are analysed in a series of four papers just submitted to the journal Astronomy & Astrophysics, but studying the magnetic field of the Milky Way is not the only reason why Planck scientists are interested in these data. Hidden behind the foreground emission from our Galaxy is the primordial signal from the Cosmic Microwave Background (CMB), the most ancient light in the Universe.

The brightness of the CMB has already been mapped by Planck in unprecedented detail and scientists are now scrutinising the data to measure the polarisation of this light. This is one of the main goals of the Planck mission, because it could provide evidence for gravitational waves generated in the Universe immediately after its birth.

In March 2014, scientists from the BICEP2 collaboration claimed the first detection of such a signal in data collected using a ground-based telescope observing a patch of the sky at a single microwave frequency. Critically, the claim relies on the assumption that foreground polarised emissions are almost negligible in this region.

Later this year, scientists from the Planck collaboration will release data based on Planck’s observations of polarised light covering the entire sky at seven different frequencies. The multiple frequency data should allow astronomers to separate with great confidence any possible foreground contamination from the tenuous primordial polarised signal.

This will enable a much more detailed investigation of the early history of the cosmos, from the accelerated expansion when the Universe was much less than one second old to the period when the first stars were born, several hundred million years later.

This image is based on data from ESA’s Planck satellite that are published in a series of four papers submitted to the journal Astronomy & Astrophysics, where more details on the data analysis and interpretation can be found:

About Planck
Launched in 2009, Planck was designed to map the sky in nine frequencies using two state-of-the-art instruments: the Low Frequency Instrument, which includes three frequency bands in the range 30–70 GHz, and the High Frequency Instrument, which includes six frequency bands in the range 100–857 GHz. HFI completed its survey in January 2012, while LFI continued to make science observations until 3 October 2013, before being switched off on 19 October 2013.

Seven of Planck’s nine frequency channels were equipped with polarisation-sensitive detectors. The image presented here is based on polarisation data collected at a frequency of 353 GHz with HFI.

The Planck Scientific Collaboration consists of all the scientists who have contributed to the development of the mission, and who participate in the scientific exploitation of the data during the proprietary period. These scientists are members of one or more of four consortia: the LFI Consortium, the HFI Consortium, the DK-Planck Consortium, and ESA’s Planck Science Office. The two European-led Planck Data Processing Centres are located in Paris, France and Trieste, Italy.