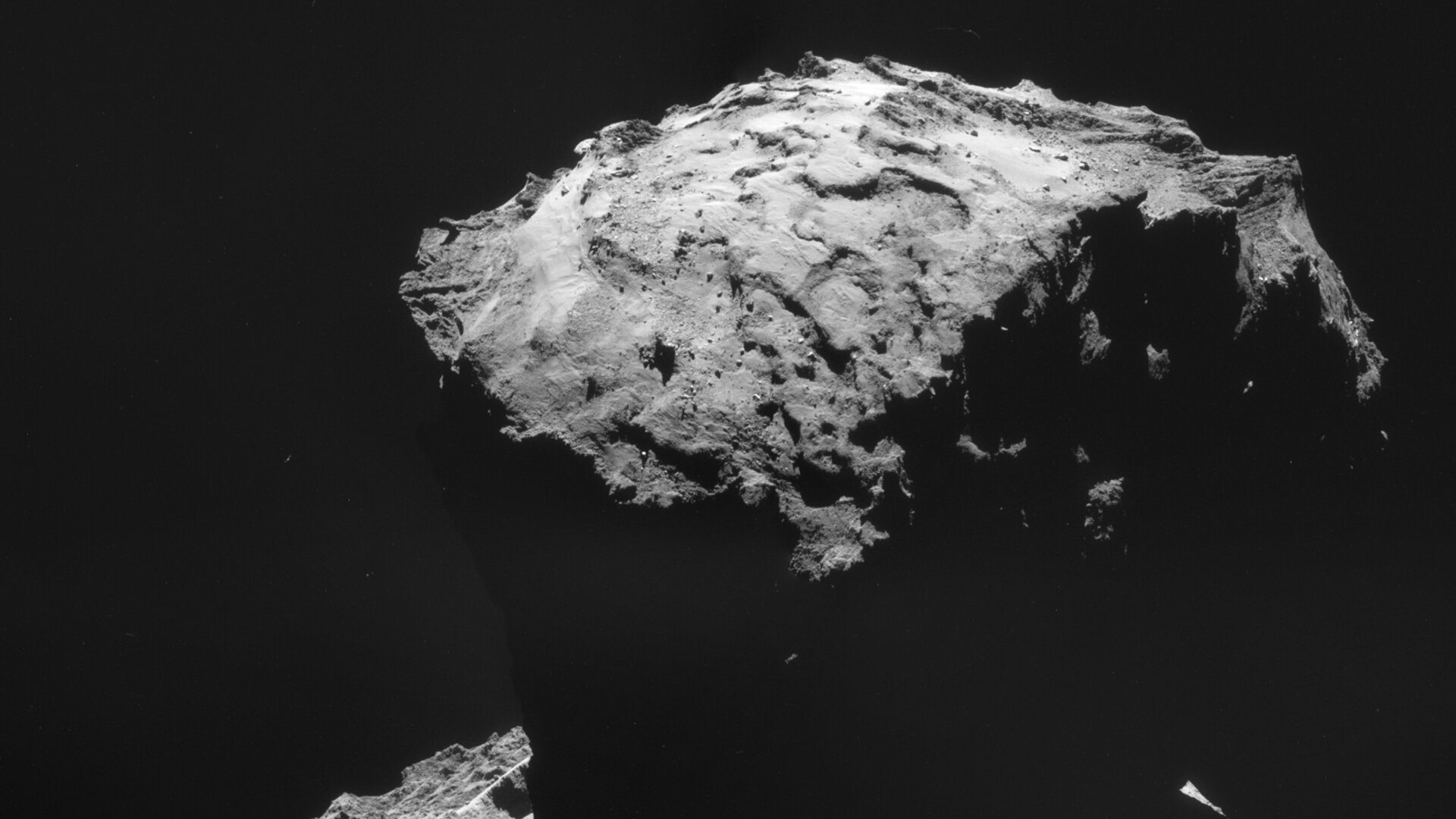 The site where Rosetta’s Philae lander is scheduled to touch down on Comet 67P/Churyumov–Gerasimenko on 12 November now has a name: Agilkia.

The landing site, previously known as ‘Site J’, is named for Agilkia Island, an island on the Nile River in the south of Egypt. A complex of Ancient Egyptian buildings, including the famous Temple of Isis, was moved to Agilkia from the island of Philae when the latter was flooded during the building of the Aswan dams last century.

The name was selected by a jury comprising members of the Philae Lander Steering Committee as part of a public competition run 16–22 October by ESA and the German, French and Italian space agencies.

Agilkia was one of the most popular entries – it was proposed by over 150 participants. The committee selected Alexandre Brouste from France as the overall winner. As a prize, Mr Brouste will be invited to ESA’s Space Operations Control Centre in Darmstadt, Germany, to follow the landing live.

Although perhaps not quite as complicated as navigating Rosetta and Philae towards the comet, the task of choosing a name was by no means simple. More than 8000 entries from 135 countries were received in one week, showing great creativity and cultural diversity.

“The decision was very tough,” says Prof. Felix Huber of the DLR German Aerospace Center, chair of the Steering Committee.

“We received so many good suggestions on how to name Site J, and we were delighted with such an enthusiastic response from all over the world. We wish to thank all participants for sharing their great ideas with us.”

Participants proposed names in a variety of languages, both ancient and modern; some were even in Esperanto. There were also some interesting acronyms, curious sequences of digits, and onomatopoeiac words.

The entries covered a tremendous range of themes, from abstract concepts to the names of places on Earth. As with the winning entry, many suggestions echoed the Egyptian origins of Rosetta and Philae, named in recognition of milestones in decoding hieroglyphics, the sacred writing system of ancient Egypt.

Many names dated back to the history of our planet’s exploration, as those journeys into the unknown are the natural forebears of Rosetta and Philae. Mythological names from all over the globe were also proposed, including gods and goddesses of water, fertility, life and creation, relating closely to the fundamental themes investigated by the mission.

Other names were drawn from ancient history and prehistory, while others recalled milestones in the history of science, particularly the history of our understanding of comets.

The progress of the Space Age was also honoured by many entries. There were many references to science fiction, celebrating the work of Jules Verne, Arthur C. Clarke and Douglas Adams, among others.

Fictional characters from films, television shows, literary and musical works were also proposed. Some even referred to the virtual astronauts of the Kerbal Space Program, a popular online space exploration game.

Several entries acknowledged the Rosetta mission as an endeavour achieved through the cooperation of many European countries, while others referred to its groundbreaking technical and scientific achievements.

And, of course, there was no shortage of more humorous entries, many referring to the resemblance of the comet’s nucleus to a rubber duck, a potato or even the cartoon dog, Snoopy.

But the final choice is Agilkia, which is how the landing site on the comet will be referred to by ESA and its mission partners.

“And it couldn’t be a more appropriate name,” comments Fred Jansen, ESA Rosetta mission manager. “The relocation of the temples of Philae Island to Agilkia Island was an ambitious technical endeavour performed in the 1960s and 1970s to preserve an archaeological record of our ancient history.

“In eight days’ time, Philae will be deployed from the orbiter onto Agilkia. On 12 November, we’ll be attempting a unique comet landing, an even more ambitious endeavour to unlock secrets of our most remote origins.”

Rosetta will release Philae at 08:35 GMT/09:35 CET on 12 November at a distance of 22.5 km from the centre of the comet, with a scheduled landing about seven hours later at Agilkia.

Taking into account the signal travel time from Rosetta on 12 November, confirmation of landing is expected on Earth at around 16:00 GMT/17:00 CET.

Live coverage of the key Go/No-Go decisions during the night of 11–12 November and of events through the day on 12 November will be provided by ESA TV, on the homepages of all partners, and on Twitter (#CometLanding). Press briefings each day either side of landing day will also be streamed live on the Internet at www.esa.int/rosetta and www.dlr.de

Rosetta is an ESA mission with contributions from its Member States and NASA. Rosetta’s Philae lander is provided by a consortium led by DLR, MPS, CNES and ASI. Rosetta is the first mission in history to rendezvous with a comet. It is escorting the comet as it orbits the Sun and will deploy a lander to its surface.