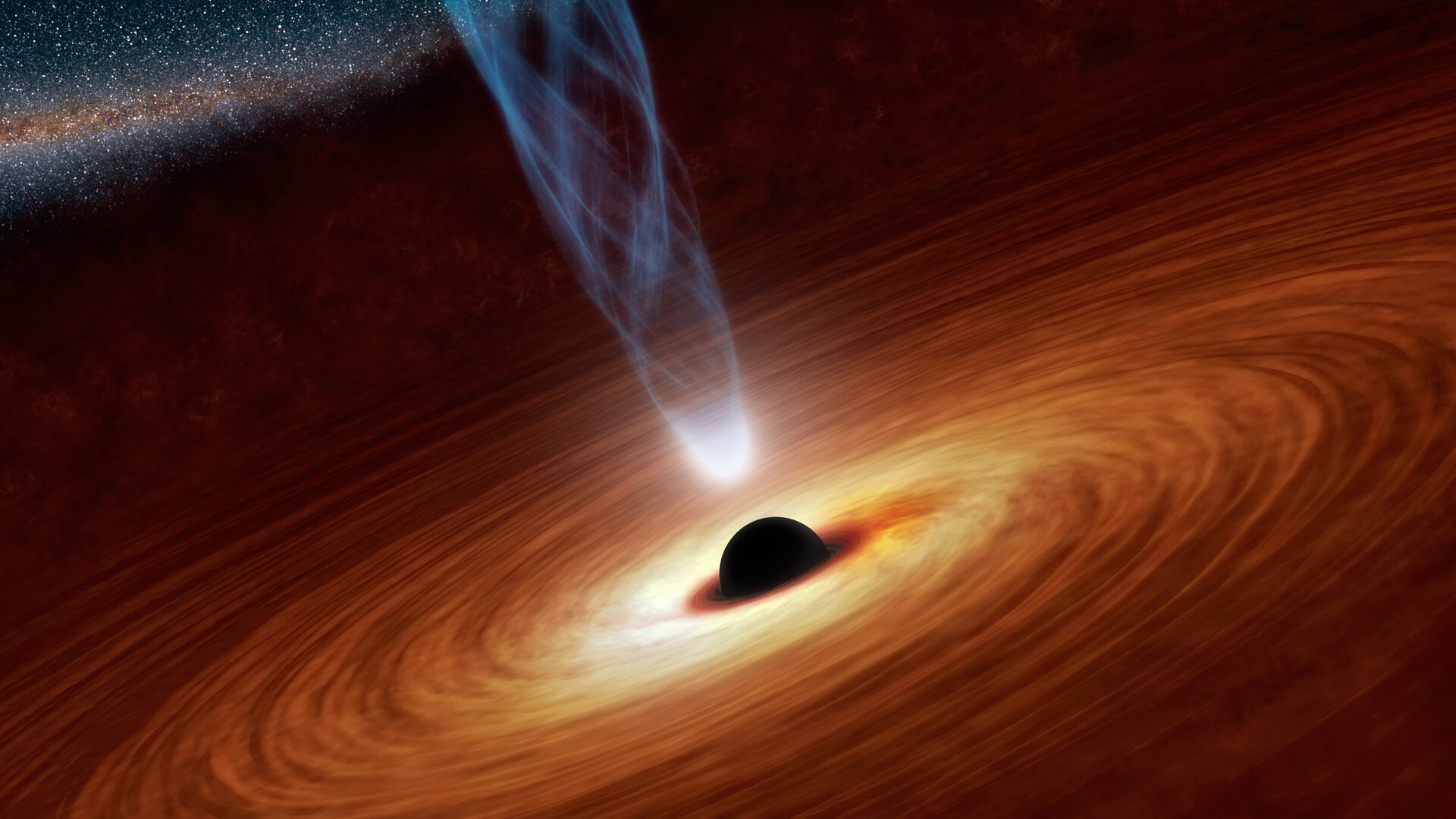 A rapidly rotating supermassive black hole has been found in the heart of a spiral galaxy by ESA’s XMM-Newton and NASA’s NuSTAR space observatories, opening a new window into how galaxies grow.

How fast a black hole spins is thought to reflect the history of its formation. In this picture, a black hole that grows steadily, fed by a uniform flow of matter spiralling in, should end up spinning rapidly. Rapid rotation could also be the result of two smaller black holes merging.

On the other hand, a black hole buffeted by small clumps of material hitting from all directions will end up rotating relatively slowly.

These scenarios mirror the formation of the galaxy itself, since a fraction of all the matter drawn into the galaxy finds its way into the black hole. Because of this, astronomers are keen to measure the spin rates of black holes in the hearts of galaxies.

One way of doing so is to observe X-rays emitted just outside the ‘event horizon’, the boundary surrounding a black hole beyond which nothing, including light, can escape.

In particular, hot iron atoms produce a strong signature of X-rays at a specific energy, which is smeared out by the rotation of the black hole. The nature of this smearing can then be used to infer the spin rate.

Using this technique, previous observations have suggested there are extremely rapidly spinning black holes in some galaxies. However, confirming the spin rate has been very difficult, because the X-ray spectrum can also be smeared out by absorbing clouds of gas lying close to the disc. Until now, telling the two scenarios apart has been impossible.

The combined data proved to be key to unlocking the puzzle. A spinning black hole model makes a clear prediction for the ratio of high-energy to low-energy X-rays. The same is true for an absorbing cloud of gas.

But importantly, the predictions are different and the new data agree only with a rapidly spinning black hole. This suggests that the galaxy has grown steadily with time, with material streaming uniformly into the central black hole.

However, astronomers cannot yet rule out a single large event where two galaxies and their black holes subsequently merged, producing a sudden acceleration of the resulting supermassive black hole.

“But we can completely rule out the absorption model,” says Guido Risaliti, INAF – Osservatorio Astrofisico di Arcetri, Italy, who led the investigation.

“Now that we know how to measure black hole spin rates for certain, we can more confidently use them to infer the evolution of their host galaxies.”

Measuring black hole spins also provides a new way to test general relativity. Published in 1915, general relativity is Albert Einstein’s description of gravity. It predicts effects that are most easily seen in extremely strong gravitational fields, such as those found near black holes, and NGC 1365’s black hole is spinning almost as fast as Einstein's theory of gravity will allow.

“Both physics and astrophysics benefit from this result,’ says Dr Risaliti, who is already applying the X-ray measurement technique to different galaxies.

“The result is a great example of the synergy that can be achieved when complementary space missions are used together. It would have been impossible to achieve this work without the two spacecraft working in tandem,” says Norbert Schartel, ESA XMM-Newton project scientist.

The European Space Agency's X-ray Multi-Mirror Mission, XMM-Newton, was launched in December 1999. It is the biggest scientific satellite to have been built in Europe and uses over 170 wafer-thin cylindrical mirrors spread over three high throughput X-ray telescopes. Its mirrors are among the most powerful ever developed. XMM-Newton's orbit takes it almost a third of the way to the Moon, allowing for long, uninterrupted views of celestial objects. The scientific community can apply for observing time on XMM-Newton on a competitive basis.

NuSTAR is a Small Explorer mission led by the California Institute of Technology in Pasadena and managed by NASA's Jet Propulsion Laboratory, also in Pasadena, for NASA's Science Mission Directorate in Washington.