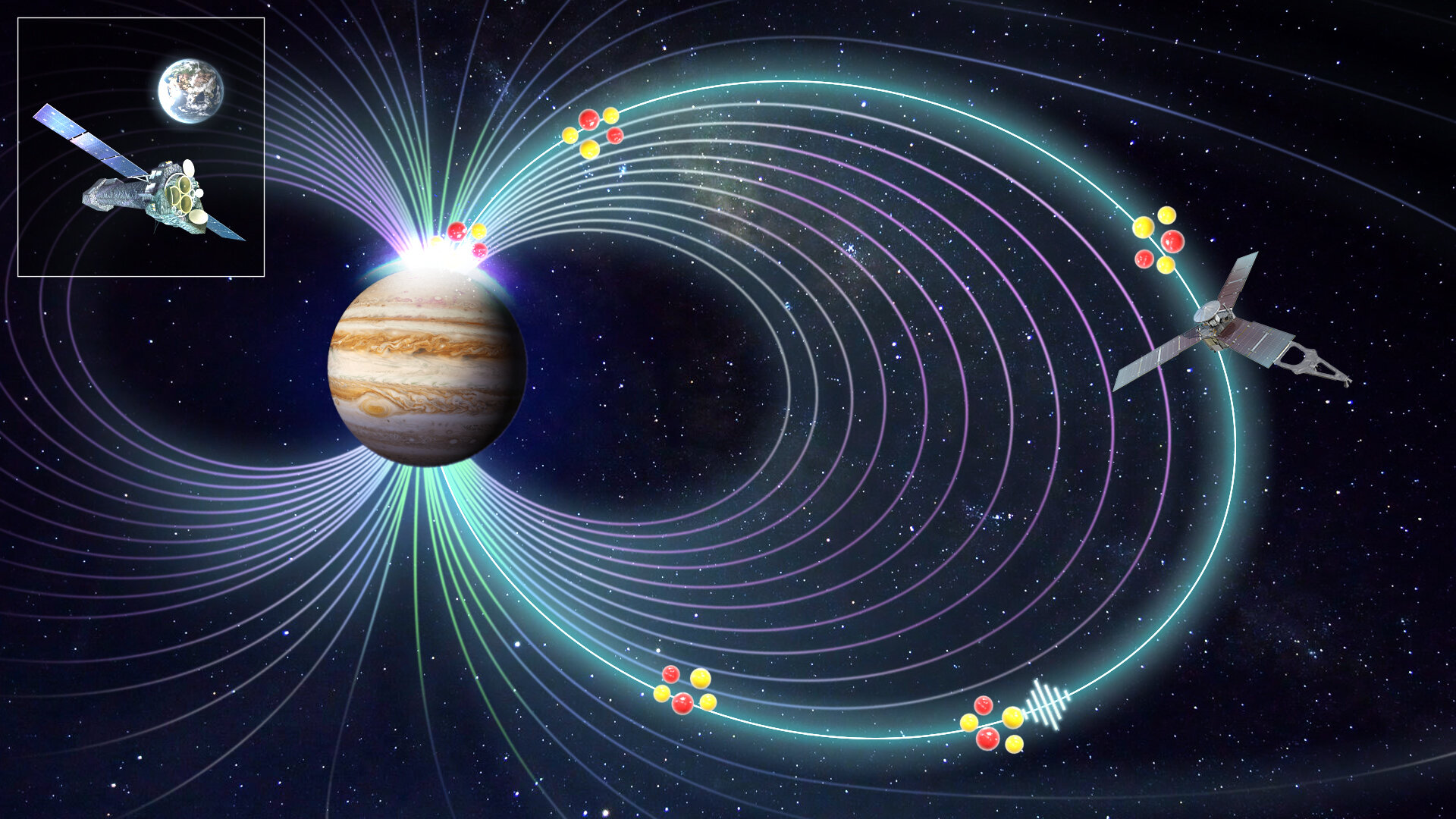 The 40-year-old mystery of what causes Jupiter’s X-ray auroras has been solved. For the first time, astronomers have seen the entire mechanism at work – and it could be a process occurring in many other parts of the Universe too.

Planetary astronomers have studied Jupiter’s spectacular X-ray auroral emission for decades. The X-ray ‘colours’ of these auroras show that they are triggered by electrically charged particles called ions crashing into Jupiter’s atmosphere. But astronomers had no idea how the ions were able to get to the atmosphere in the first place. 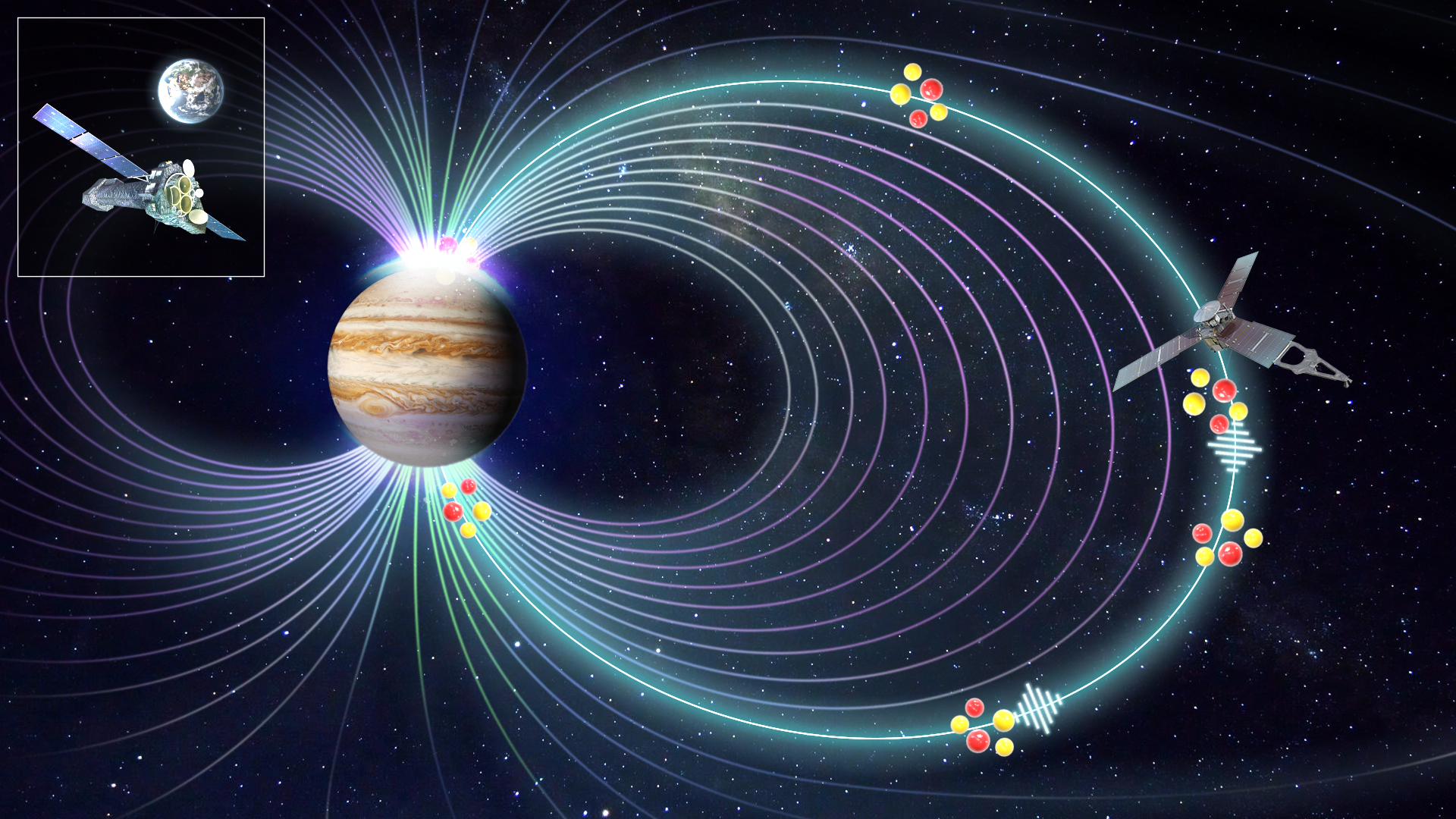 Now, for the first time, they have seen the ions ‘surfing’ electromagnetic waves in Jupiter’s magnetic field, down into the atmosphere.

The vital clues came from a new analysis of data from ESA’s XMM-Newton telescope and NASA’s Juno spacecraft. Situated in Earth’s orbit, XMM-Newton makes remote observations of Jupiter at X-ray wavelengths. Juno on the other hand circles the giant planet itself, taking in-situ readings from inside Jupiter’s magnetic field. But the question was: what should the team look for?

The clue came when Zhonghua Yao, Institute of Geology and Geophysics, Chinese Academy of Sciences, Beijing, and lead author of the new study, realised that something didn’t make sense about Jupiter’s X-ray auroras.

On Earth, auroras are visible only in a belt surrounding the magnetic poles, between 65 and 80 degrees latitude. Beyond 80 degrees, auroral emission disappears because the magnetic field lines here leave Earth and connect to the magnetic field in the solar wind, which is the constant flux of electrically charged particles ejected by the Sun. These are called open field lines and in the traditional picture, Jupiter and Saturn’s high-latitude polar regions are not expected to emit substantial auroras.

However, Jupiter’s X-ray auroras are inconsistent with this picture. They exist poleward of the main auroral belt, pulsate regularly, and can sometimes be different at the north pole from the south pole. These are typical features of a ‘closed’ magnetic field, where the magnetic field line exits the planet at one pole and reconnects with the planet at the other.

Using computer simulations, Zhonghua and colleagues previously found that the pulsating X-ray auroras could be linked to closed magnetic fields that are generated inside Jupiter and then stretch out millions of kilometres into space before turning back.

On 16 and 17 July 2017, XMM-Newton observed Jupiter continuously for 26 hours and saw X-ray auroras pulsating every 27 minutes. Simultaneously, Juno had been travelling between 62 and 68 Jupiter radii above the planet’s pre-dawn areas. This was exactly the area that the team’s simulations suggested were important for triggering the pulsations. So, the team searched the Juno data for any magnetic processes that were occurring at the same rate.

The particles themselves are electrically charged atoms called ions. Guided by the field, the ions ‘surf’ the EMIC wave across millions of kilometres of space, eventually slamming into the planet’s atmosphere and triggering the X-ray aurora.

“What we see in the Juno data is this beautiful chain of events. We see the compression happen, we see the EMIC wave triggered, we see the ions, and then we see a pulse of ions traveling along the field line. And then a few minutes later, XMM sees a burst of X-rays,” says William Dunn, Mullard Space Science Laboratory, University College London, who co-led the research.

Now that the process responsible for Jupiter’s X-ray auroras has been identified for the first time, it opens up a wealth of possibilities for where it could be studied next. For example, at Jupiter, the magnetic field is filled with sulphur and oxygen ions that are spewed out by the volcanoes on the moon Io. At Saturn, the moon Enceladus jets water into space, filling Saturn’s magnetic field with water ions.

“This is a fundamental process that’s applicable to Saturn, Uranus, Neptune and probably exoplanets as well,” says Zhonghua.

It may be more widely applicable even than that because now that the process has been revealed, there is a striking similarity to the ion auroras that happen here on Earth. In the case of Earth, the ion responsible is a proton, which comes from a hydrogen atom, and the process is not energetic enough to create X-rays. Yet, the basic process is that same. So, Jupiter’s X-ray aurora is fundamentally an ion aurora, although at much higher energy than the proton aurora on Earth.

“It could be that EMIC waves play an important role in transferring energy from one place to another across the cosmos,” says William.

As for Jupiter itself, the study of its auroras will continue with ESA’s JUpiter ICy moons Explorer (Juice). Set to arrive by 2029, Juice will study the planet’s atmosphere, magnetosphere, and the effect that Jupiter’s four largest moons have on the auroras.