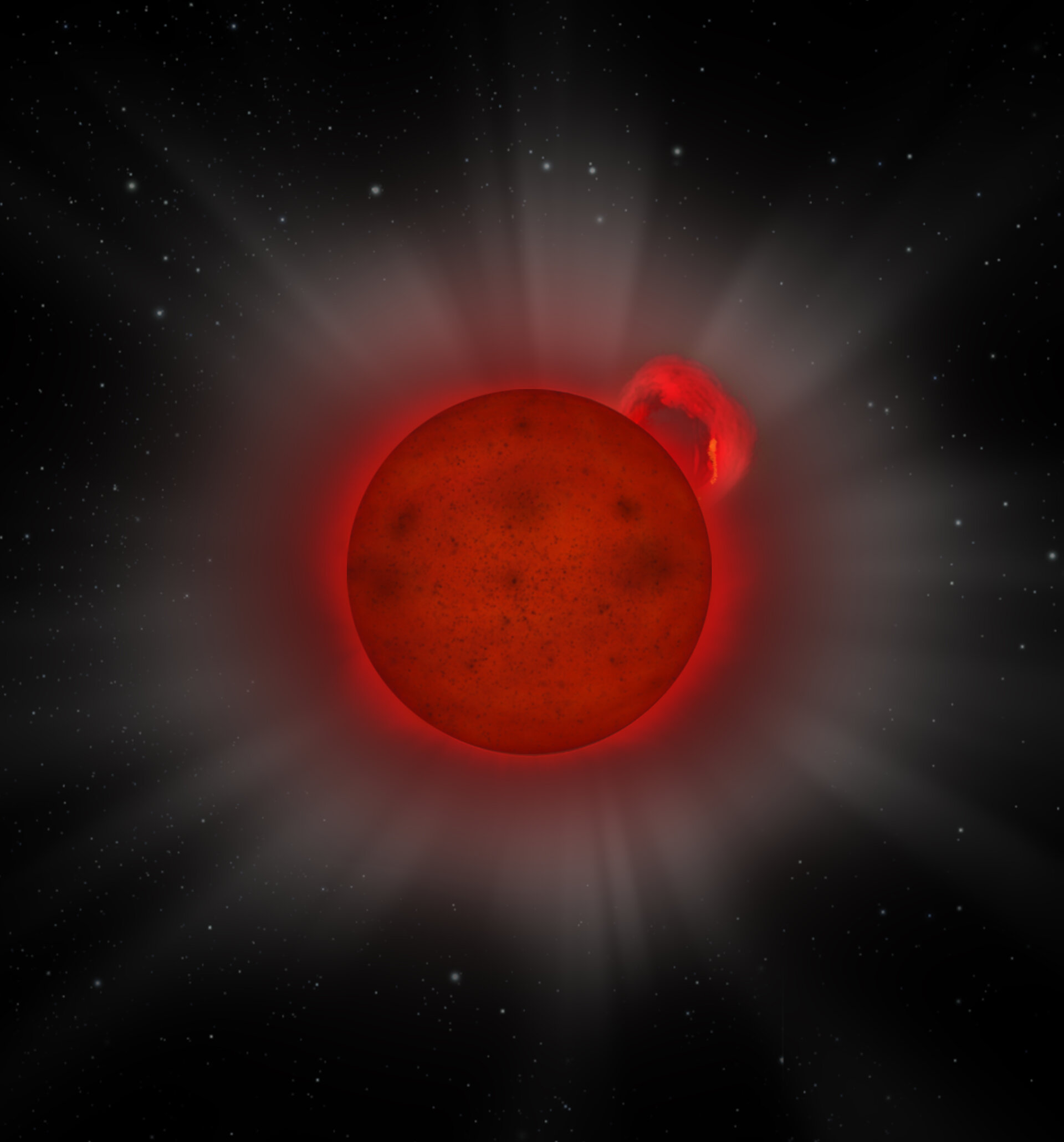 A star of about eight percent the Sun’s mass has been caught emitting an enormous ‘super flare’ of X-rays – a dramatic high-energy eruption that poses a fundamental problem for astronomers, who did not think it possible on stars that small.

The culprit, known by its catalogue number J0331-27, is a kind of star called an L dwarf. This is a star with so little mass that it is only just above the boundary of actually being a star. If it had any less mass, it would not possess the internal conditions necessary to generate its own energy.

Astronomers spotted the enormous X-ray flare in data recorded on 5 July 2008 by the European Photon Imaging Camera (EPIC) onboard ESA’s XMM-Newton X-ray observatory. In a matter of minutes, the tiny star released more than ten times more energy of even the most intense flares suffered by the Sun.

Flares are released when the magnetic field in a star’s atmosphere becomes unstable and collapses into a simpler configuration. In the process, it releases a large proportion of the energy that has been stored in it.

This explosive release of energy creates a sudden brightening – the flare – and this is where the new observations present their biggest puzzle.

“This is the most interesting scientific part of the discovery, because we did not expect L-dwarf stars to store enough energy in their magnetic fields to give rise to such outbursts,” says Beate Stelzer, Institut für Astronomie und Astrophysik Tübingen, Germany, and INAF – Osservatorio Astronomico di Palermo, Italy, who was part of the study team.

Energy can only be placed in a star’s magnetic field by charged particles, which are also known as ionised material and created in high-temperature environments. As an L dwarf, however, J0331-27 has a low surface temperature for a star – just 2100K compared to the roughly 6000K on the Sun. Astronomers did not think such a low temperature would be capable of generating enough charged particles to feed so much energy into the magnetic field. So the conundrum is: how a super flare is even possible on such a star.

The super flare was discovered in the XMM-Newton data archive as part of a large research project led by Andrea De Luca of INAF – Istituto di Astrofisica Spaziale e Fisica Cosmica in Milan, Italy. The project studied the temporal variability of around 400 000 sources detected by XMM-Newton over 13 years

Andrea and collaborators were particularly looking for peculiar phenomena and in J0331-27 they certainly got that. A number of similar stars had been seen to emit super flares in the optical part of the spectrum, but this is the first unambiguous detection of such an eruption at X-ray wavelengths.

The wavelength is significant because it signals which part of the atmosphere the super flare is coming from: optical light comes from deeper in the star’s atmosphere, near its visible surface, whereas X-rays come from higher up in the atmosphere.

Understanding the similarities and differences between this new – and so far unique – super flare on the L dwarf and previously observed flares, detected at all wavelengths on stars of higher mass is now a priority for the team. But to do that, they need to find more examples.

“There is still much to be discovered in the XMM-Newton archive,” says Andrea. “In a sense, I think this is only the tip of the iceberg.”

One clue they do have is that there is only one flare from J0331-27 in the data, despite XMM-Newton having observed the star for a total of 3.5 million seconds – about 40 days. This is peculiar because other flaring stars tend to suffer from numerous smaller flares too.

“The data seem to imply that it takes an L dwarf longer to build up the energy, and then there is one sudden big release,” says Beate.

Stars that flare more frequently release less energy each time, while this L dwarf seems to release energy very rarely but then in a really big event. Why this might be the case is still an open question that needs further investigation.

“The discovery of this L dwarf super flare is a great example of research based on the XMM-Newton archive, demonstrating the mission's enormous scientific potential,” says Norbert Schartel, XMM-Newton project scientist for ESA. “I look forward to the next surprise.”

Notes for Editors
“EXTraS discovery of an X-ray superflare from an L dwarf” by A. De Luca et al. 2020 is published in Astronomy & Astrophysics.

The discovery was made as a result of the Exploring the X-ray Transient and variable Sky (EXTraS) project, a EU/FP7 project devoted to a systematic variability study of the X-ray sources in the XMM-Newton public archive.