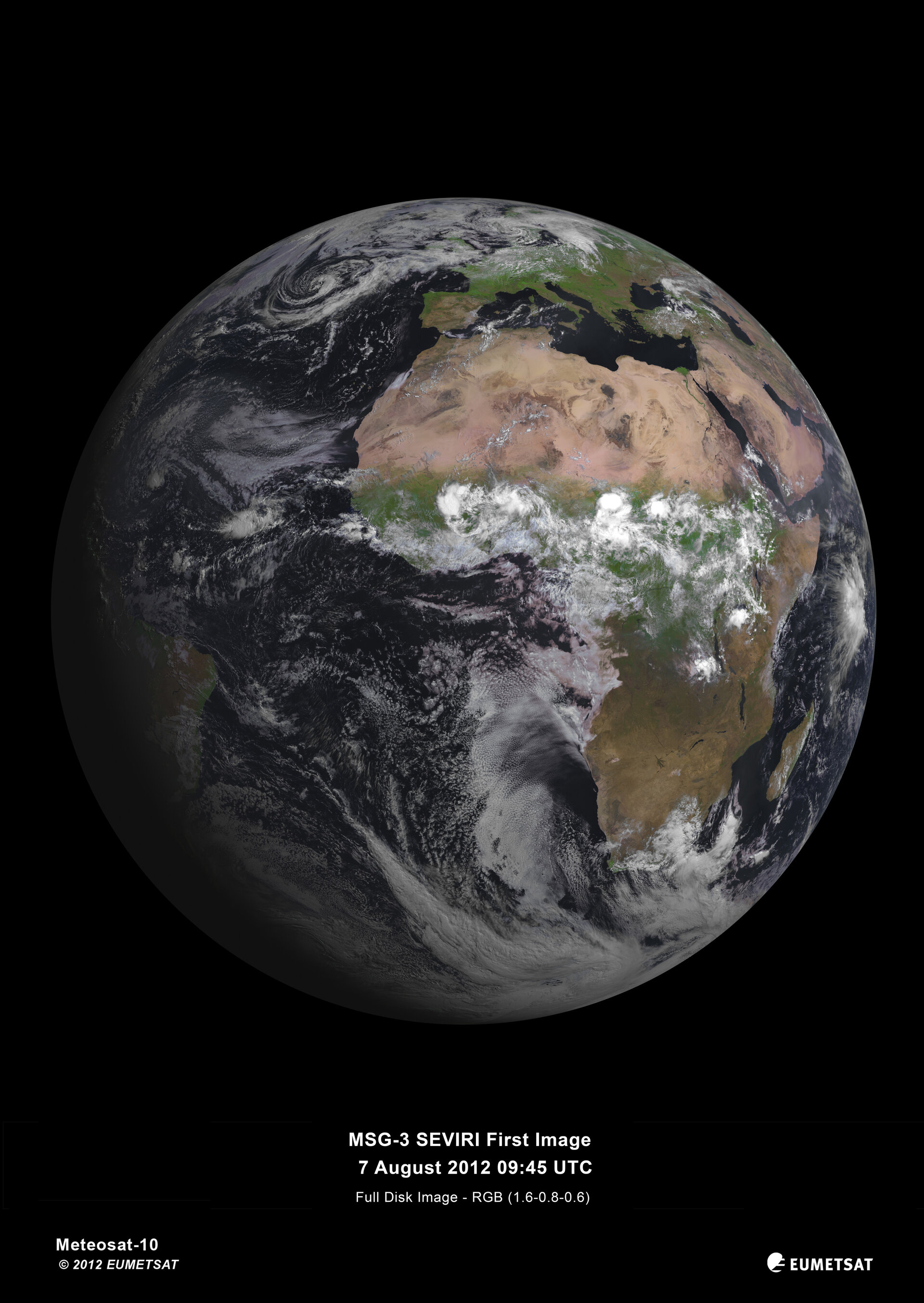 PR 25 2012 - Today, the Spinning Enhanced Visible and Infrared Imager (SEVIRI) instrument on MSG-3 captured its first image of the Earth. This demonstrates that Europe’s latest geostationary weather satellite, launched on 5 July, is performing well and is on its way to taking over operational service after six months of commissioning.

The European Space Agency (ESA) was responsible for the initial operations after launch (the so-called launch and early orbit phase) of MSG-3 and handed over the satellite to EUMETSAT on 16 July.

The first image is a joint achievement by ESA, EUMETSAT, and the European space industry. For its mandatory programmes, EUMETSAT relies on ESA for the development of new satellites and the procurement of recurrent satellites like MSG-3. This cooperation model has made Europe a world leader in satellite meteorology by making best use of the respective expertise of the two agencies.

MSG is a joint programme undertaken by ESA and EUMETSAT. ESA is responsible for the development of satellites fulfilling user and system requirements defined by EUMETSAT and of the procurement of recurrent satellites on its behalf. ESA also performs the Launch and Early Orbit Phase operations required to place the spacecraft in geostationary orbit, before handing it over to EUMETSAT for exploitation.

EUMETSAT develops all ground systems required to deliver products and services to users and to respond to their evolving needs, procures launch services and operates the full system for the benefit of users.

MSG-3 is the third in a series of four satellites introduced in 2002. These spin-stabilised satellites carry the primary Spinning Enhanced Visible and Infrared Imager, or SEVIRI. The prime contractor for the MSG satellites is Thales Alenia Space, with the SEVIRI instrument built by Astrium.

SEVIRI can pick out features as small as a kilometre across in the visible bands, and three kilometres in the infrared.

In addition to its weather-watching mission and collection of climate records, MSG-3 has two secondary payloads.

The Geostationary Earth Radiation Budget sensor measures both the amount of solar energy that is reflected back into space and the infrared energy radiated by the Earth system, to better understand climate processes.

A Search & Rescue transponder will turn the satellite into a relay for distress signals from emergency beacons.

The MSG satellites were built in Cannes, France, by a European industrial team led by Thales Alenia Space, France. More than 50 subcontractors from 13 European countries are involved.

ESA develops the launchers, spacecraft and ground facilities needed to keep Europe at the forefront of global space activities. Today it launches satellites for Earth observation, navigation, telecommunications and astronomy, sends probes to the far reaches of the Solar System and cooperates in the human exploration of space.

The data and products from EUMETSAT’s satellites are vital to weather forecasting and make a significant contribution to the monitoring of environment and the global climate.