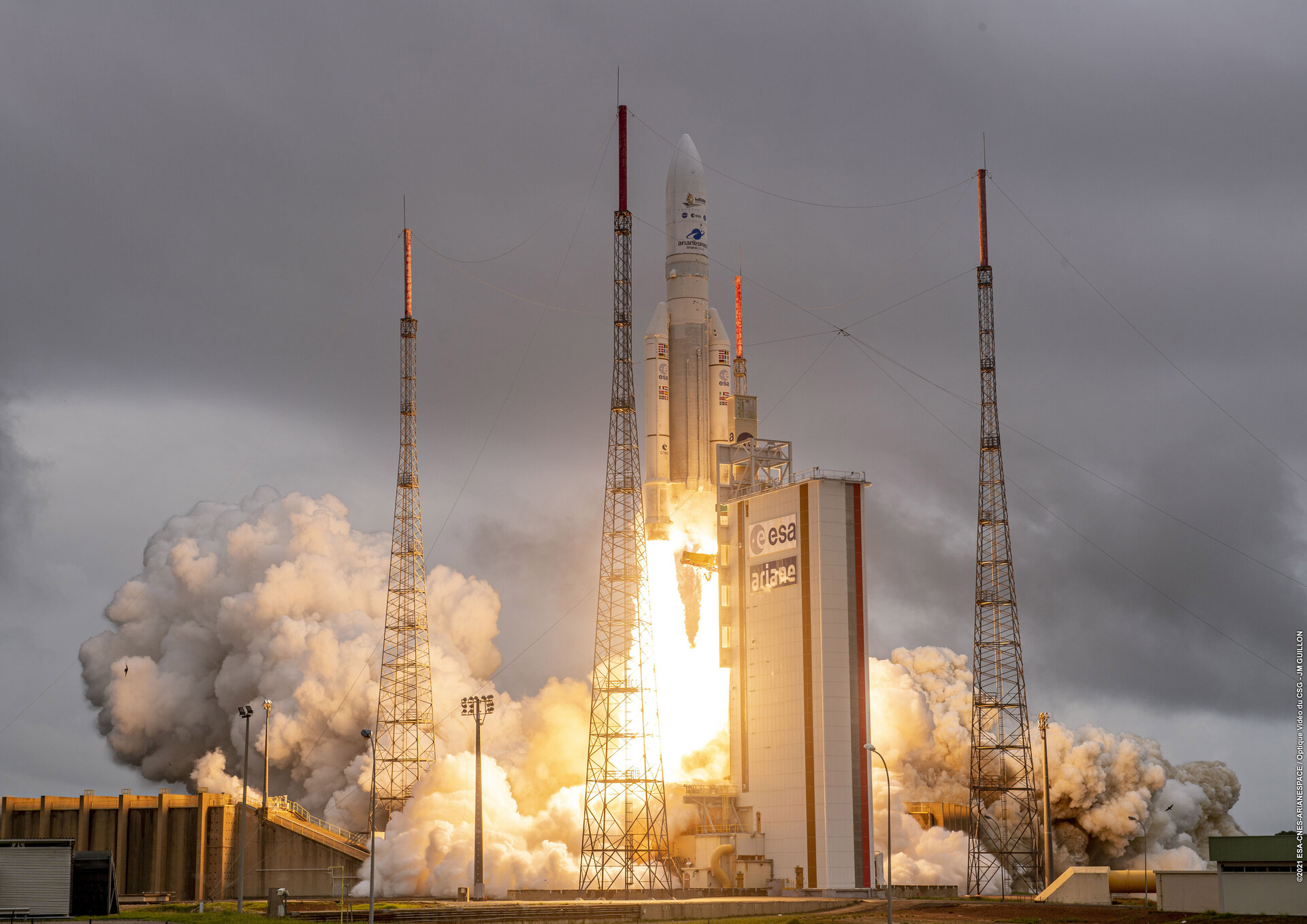 British scientists and engineers have played a crucial role in developing a once-in-a-generation spacecraft that will deliver unprecedented insight into the evolution of the Universe.

The James Webb Space Telescope – the largest and most powerful science observatory ever sent into space – launched today on board a customised Ariane 5 from Europe’s Spaceport in French Guiana.

This marks the beginning of a month-long journey to its observing position, some 1.5 million km from Earth.

Webb is a joint project between NASA, ESA and the Canadian Space Agency. The UK played a key role in leading a European consortium which, in partnership with NASA, built and tested one of Webb’s four main scientific instruments.

Webb is set to see further into the origins of the cosmos, unveiling secrets about the Universe's first galaxies, the birth of stars and planets, and exoplanets with the potential for life.

Closer to home, it will enable scientists to observe the Solar System in exquisite new detail.

British expertise was vital in developing Webb’s Mid-Infrared Instrument (MIRI), which will help astronomers to look further back in time than ever before.

Light from stars that are billions of light-years away travels through space that is expanding. This stretches the light’s wavelength into the infrared part of the electromagnetic spectrum.

The instrument includes a spectrograph, which breaks light into its many wavelengths, revealing detailed information such as how a galaxy moves or what molecules make up an exoplanet’s atmosphere.

MIRI also hosts a coronagraph to block starlight and reveal fainter objects next to stars, as well as a camera to take pictures.

The European consortium that helped to develop MIRI was led by the Science and Technology Facilities Council (STFC) from its UK Astronomy Technology Centre (UKATC) in Edinburgh, and included STFC RAL Space, the University of Leicester, and Airbus UK.

Working with partners, the agency was also responsible for the development and qualification of the Ariane 5 adaptations for the Webb mission and for the procurement of the launch service.

Caroline Harper, Head of Space Science at the UK Space Agency, said: “Webb is set to re-write the text books on astronomy, showing us things about the universe we have never been able to see before.  I am excited to see the fascinating discoveries the spacecraft makes as it reveals the evolution of the Universe.

“The UK has played a crucial role in this once-in-a-generation mission, developing the Mid-Infrared Instrument, which will examine the physical and chemical properties of objects in the early universe in greater detail than ever. This has been a fantastic example of academic-industry partnership, showcasing the skills and expertise of our scientists and engineers.”

Gillian Wright, European Principal Investigator for MIRI and Director of UKATC, said: “To see Webb launch, with MIRI on board, after more than two decades is a seminal moment. MIRI is a special instrument, for the breadth of its science, the team that built it, and being the coolest instrument on Webb. The MIRI team rose to the challenges and brought some exquisite engineering solutions to make it a reality.

“The Webb mission as a whole is an amazing technological breakthrough in scale and complexity, and this extends to the instruments, including MIRI.   With the launch, all of us are excitedly anticipating the first MIRI data and the new view of the universe we will have.”

UK Science Minister George Freeman said: “Today is a monumental milestone for international and UK space science: the Webb Space Telescope will allow us to go further and deeper to explore and discover our planetary Universe. The project draws heavily on the world-class expertise of top UK scientists and engineers who were able to deliver vital pieces of this complex and powerful telescope.

“Being at the heart of this international project showcases the innovative talent of the UK’s world-leading scientists and engineers, and emphasises our position as a global science powerhouse.”