Death of the dinosaurs 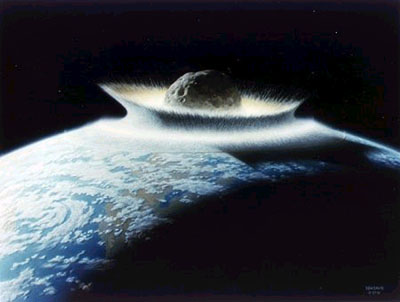 Asteroid impact wiped out the dinosaurs

Earth is a moving target in a shooting gallery. Almost every day, a small chunk of space rock passes within a few million kilometres of the planet – often unseen. Sometimes they come closer than the Moon.

Scientists think there may be as many as 100 000 Near-Earth asteroids that are more than 100 metres across – the size of a football field. Over 600 Earth-grazers that are bigger than 1 km have been discovered. Hundreds more remain to be found.

Every few thousand years, an asteroid will actually crash into our world. The most recent event took place in Siberia in 1908, when a small asteroid flattened more than 2000 square kilometres of forest. The explosion would have wiped out a city the size of Paris or London.

Very rarely, an impact occurs that wipes out life over much of the planet. 65 million years ago a 10 kilometre wide asteroid generated an explosion bigger than all the hydrogen bombs on Earth. It dug a 180 kilometre wide crater in Mexico and spread a layer of ash around the world. Widespread fires, followed by darkness and extreme cold, caused the dinosaurs to become extinct.