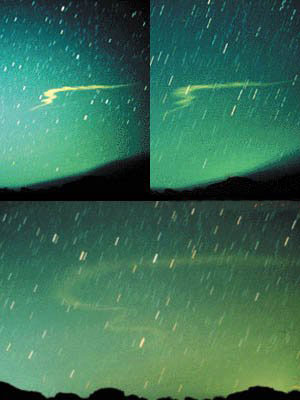 Different views of a Leonid fireball in 1966

There are several hundred comets that spend most of their lives among the planets of the inner Solar System. These comets leave many trails of gas and dust behind them.

The sand-sized grains of dust sometimes slam into the thin air that surrounds the Earth, called the atmosphere, where they get hot very quickly. As the dust grains burn up, they leave bright streaks of light across the night sky. These streaks are called meteors, often nicknamed 'shooting stars' or 'falling stars'.

On a clear night, if you stare at the sky for long enough, you will see one of these meteors, or shooting stars. At certain times of the year, the Earth passes through a comet trail. The number of shooting stars then increases to perhaps 100 per hour. This is called a ‘meteor shower’.

On rare occasions, meteor showers have been known to light up the entire sky. People who saw the Leonid shower of 1966 were amazed to see 40 shooting stars every second!