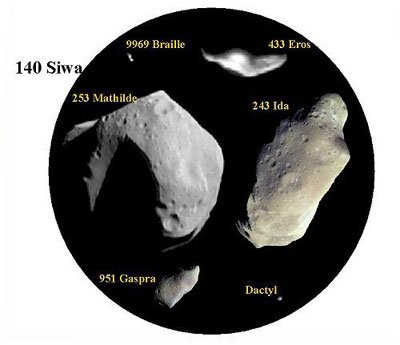 Asteroids come in many shapes and sizes

Most asteroids are so small and so far away that we can only see them as tiny points of light. They are found through their movement in front of the 'fixed stars' of the night sky. We learn more about them by using large telescopes to study the light they reflect.

However, even the Hubble Space Telescope is unable to reveal much about them. One of the most interesting asteroids is metal-rich Vesta. Hubble’s images show a fairly round world with a large impact crater.

Some Earth-grazing asteroids have been studied with radar. The radar echoes are picked up by large radio telescopes and used to find out their shape and size.

A few asteroids have been studied in greater detail by visiting spacecraft. The pictures show objects that have many craters, showing they have been battered by collisions over billions of years. In 2000, NEAR Shoemaker became the first spacecraft to go into orbit around an asteroid. The spacecraft ended its life by making an historic landing on Eros, one of the largest near-Earth asteroids.

ESA's Rosetta spacecraft has also flown past two main belt asteroids - Steins and Lutetia - on its way to a comet. About 130 km across, Lutetia was the largest asteroid yet visited by a spacecraft. ESA is also studying ways of nudging off course an asteroid that is heading towards Earth.